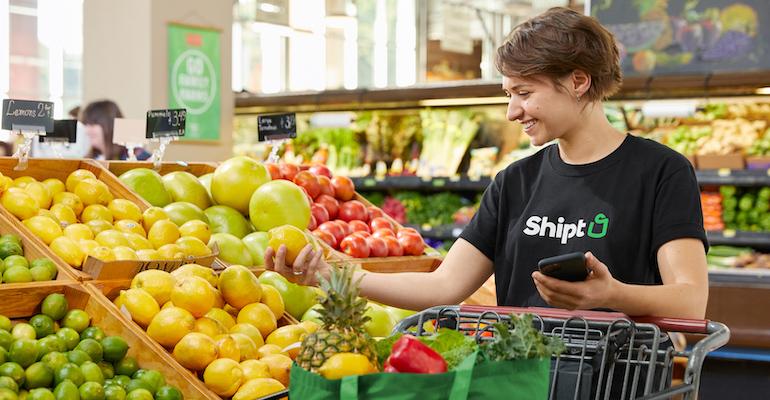 Shipt
To use Shipt's delivery service, consumers previously had to sign up for an annual subscription costing $99.
News>Online Retail

Target Corp.’s Shipt same-day delivery service has introduced a pay-per-order option that enables consumers to use the service without having to commit to an annual membership.

Birmingham, Ala.-based Shipt said Thursday that current and prospective customers now can buy Shipt passes for a fee of $10 for one online delivery order, $9 for three orders or $8 for five orders.

Customers can switch from a pay-per-order to a subscription model at any time. An annual membership costs $99 per year for unlimited free deliveries on orders of $35 or more. Shipt personal shoppers pick, pack and deliver the online orders, which can include food and beverages, daily essentials and nonfood items, depending on the retailer.

“Ever since Shipt first launched with our subscription membership model, our customers have responded positively. And up until now, all of our customers had an ongoing membership with us,“ Shipt CEO Kelly Caruso said in a statement. “However, we knew that we had an opportunity to introduce even more people to Shipt by allowing them to shop with us in ways that best suit their needs. The challenges consumers have faced during the pandemic further strengthened our resolve to make Shipt as accessible to as many customers as possible.”

Shipt said that earlier this year it piloted offering one-, three- and five-time delivery order passes with non-members. During the test, passes quickly accounted for the majority of how new users began shopping with Shipt, the company noted, adding that the pay-per-order option generated a 25% increase in new customers.

Since rolling out the passes nationwide, Shipt found that almost 80% of new users first begin shopping on the Shipt platform via the single- or multi-use offerings, although a “vast majority” of Shipt customers subscribe to the service, the company said.

“We believe that the future of Shipt is one where our customers and members engage with us in ways that work for them, their needs and their lifestyle,” Caruso added. “This expanded suite of delivery rates and options has been a meaningful option for both new customers as well as those that are new to grocery and essential delivery services.”