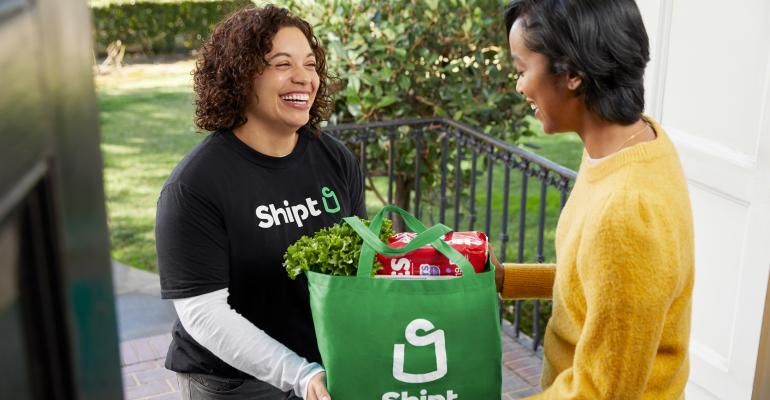 As online delivery service Shipt prepares to expand its footprint and break into new retail verticals, the company today unveiled a refreshed look for the brand, including a new logo that replaces the familiar green spaceship logo for a shopping bag that the company says is “reflective of Shipt’s approachable, people-centric personality and mission.”

Later this month, Shipt will also launch a robust ad campaign that features the refreshed brand across 10 video vignettes demonstrating its campaign tagline “Over-delivering delivery,” and will be repurposed for TV, digital, social, radio and out-of-home advertising both nationally and locally.

Moving beyond its grocery store base — which includes partnerships with parent Target, as well as retailers like H-E-B, Meijer and Costco — Shipt announced in January that it would begin offering same-day delivery service from Office Depot and OfficeMax stores in more than 200 markets, serving over 60 million households in this new retail vertical for the delivery specialist. Outside of the grocery channel, Shipt also has partnerships with CVS Pharmacy, Sur La Table and Petco.

In announcing the Office Depot deal, Shipt CEO Kelly Caruso said, “Our vision at Shipt is to deliver the products consumers need so that they can spend their time doing what matters most. With Office Depot, we’re now able to serve more people in more ways, from the local business owner to the schoolteacher to the work-from-home mom or dad. We’re in the midst of an exciting evolution to a multivertical, multiretailer delivery service and are thrilled to have Office Depot as part of the Shipt family.”

Shipt said it aims to add new multivertical retail partners to its online marketplace throughout the year.