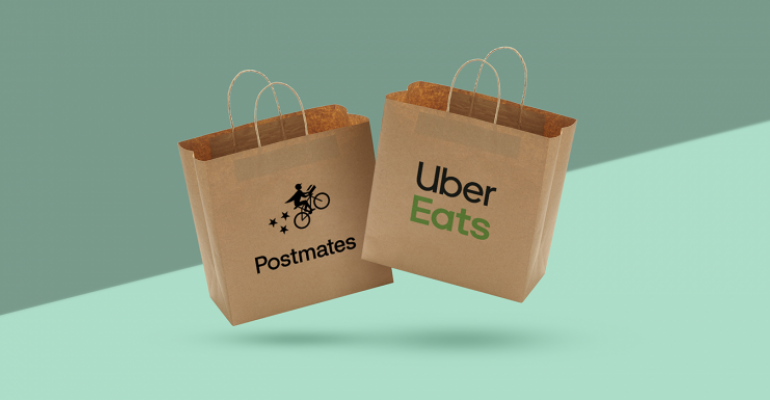 The all-stock deal comes a day after U.S. market leader DoorDash filed its initial public offering, where it hopes to raise up to $2.8 billion.  The Uber-Postmates deal, when first announced in the summer, was valued at $2.65 billion.

With Postmates, Uber Eats will grow its footprint in Southwest markets where Postmates is a dominant player including Southern California (Los Angeles, Orange County, San Diego), Las Vegas and Phoenix.

Postmates, an early player in the meal delivery sector, has more than 600,000 restaurants and retailers on its platform including emerging brands such as Sugarfish, Tocaya Organica, Ono Hawaiian BBQ and Sweetfin.  That pairs with Uber Eats’ more than 500,000 restaurant partners across the globe including big chains such as McDonald’s, KFC and Burger King.

Both delivery apps will continue to run separately, while be “supported by a more efficient, combined merchant and delivery network,” the company said Tuesday.

According to the latest data from e-commerce research firm Edison Trends, the combined market share of Uber Eats and Postmates would be roughly 35%. That would make them No. 2 behind DoorDash, whose market share at the end of October, based on millions of anonymized transactions, was 50%. That includes market share from Caviar.

“We’re thrilled to bring these two teams together to continue to innovate, bringing ever-better products and services for merchants, delivery people, and consumers across the country,” Uber CEO Dara Khosrowshahi said in a statement.

Buying Postmates offers other advantages for Uber. It can leverage the company’s delivery as a service platform, which allows restaurants to pay a fee for last-mile delivery orders made through their website or app. DoorDash also provides this service to restaurant brands.

Uber Eats also gains access to Postmates’ state-of-the-art batching system, which allows drivers to deliver multiple orders from one restaurant because the addresses are along the same route. The batching system creates efficiencies without increasing delivery time for the customer.

Postmates co-founder Bastian Lehmann will retain his role as CEO.

As such, Uber said it plans to launch a national listening tour in 2021 to learn more about merchant needs across North America.

The company plans to use the learnings from the tour to develop products, services, and policies that protect the interest of restaurant and retail partners. They will be working with local restaurant associations and chambers of commerce “to make sure the right folks are in the room,” the company said in a Tuesday blog post.

“The goal is to bring our leadership closer to the incredibly diverse spectrum of merchants using the Uber Eats and Postmates platforms, so we can better listen, understand, and build for the challenges and opportunities our partners face,” the company said. “These forums will give restaurants—and increasingly other types of merchants—a bigger seat at the table to provide feedback on products in development, policy decisions, and more.”

For example, Postmates delivers from non-partnered merchants. This is a controversial tactic as the meal delivery is made without having a formal agreement with restaurant.

In late October, Chicago-based Grubhub was sued in a class action filing accusing the company of misleading both consumers and restaurant operators by adding dining establishments on their delivery marketplace without consent.

“We are aware of this, and together are looking forward to discussing anything merchant partners want to discuss, and any feedback they want to share,” an Uber spokesperson said when asked about continuing to delivery from non-partnered restaurants.