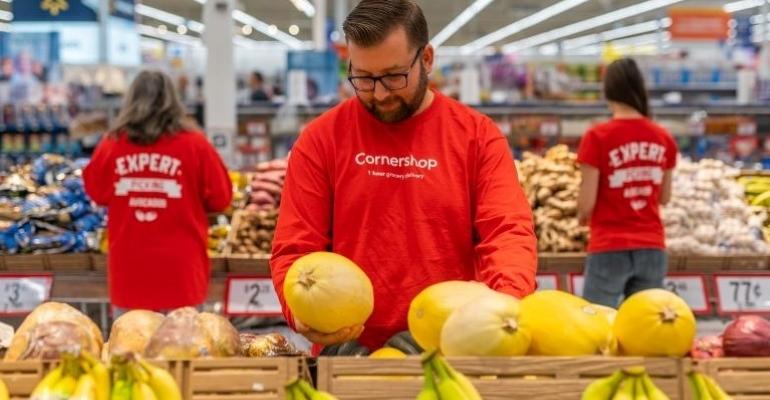 Walmart’s Canadian business has expanded its pilot of the Cornershop express grocery delivery service, months after the retail giant was thwarted in a bid to acquire the startup.

Walmart Canada said Thursday that availability of Cornershop’s service is being extended from five to 14 stores in the greater Toronto area due to the strong customer response. Through the Cornershop mobile app or website, customers can order groceries on demand and have them delivered in as soon as 60 minutes.

"Customers in the GTA have more choices than ever for how to shop for on-demand groceries at Walmart," Daryl Porter, vice president of e-commerce operations and logistics for Walmart eCommerce in Canada, said in a statement. "By introducing more shopping options at Walmart, we're helping make life easier and more convenient without compromising on our everyday low prices. Cornershop and other delivery services are one way that we can provide that easy, convenient access."

Mississauga, Ontario-based Walmart Canada noted that it’s the first official partner for Cornershop outside Latin America. Founded in 2015 in San Francisco, Cornershop currently has its headquarters in Mexico City.

In September 2018, Bentonville, Ark.-based Walmart announced a $225 million deal to buy Cornershop as part of efforts to build up its international omnichannel capabilities. However, this past June, Mexico’s Federal Economic Competition Commission (COFECE) rejected the acquisition, citing competitive concerns.

A crowdsourced service, Cornershop’s online grocery marketplace works as follows: Using the Cornershop app or website, customers order groceries for delivery. Cornershop personal shoppers then go to one of the 14 participating Walmart stores to pick and pack their orders. Customers are called at the end of each shop, and they can approve any replacements or request another item to be added to the cart.

The companies said Cornershop has a high availability for on-demand time slots, and customers can subscribe to Cornershop Pop for $99 per year to get free delivery on orders over $40, as well as receive larger discounts.

"Toronto is our first market outside of Latin America, making it a special city to everybody on our team. We're excited about our progress thus far, and we're proud that our partnership with Walmart in Mexico and Chile helped us earn the trust of our new partners at Walmart Canada," stated Oskar Hjertonsson, founder and CEO of Cornershop. "We offer customers consistent, high-quality service for on-demand groceries delivered from Walmart stores in Toronto, Mississauga and more cities in the near future."

Walmart works with several online grocery delivery partners in Canada, including Instacart, Food-X and JoeyCo. In mid-August, Walmart Canada announced national availability of same-day delivery service with Instacart, which first launched with the retailer in September 2018.

Overall, Walmart operates about 410 stores in Canada that serve more than 1.2 million customers daily. Walmart Canada’s website, Walmart.ca, is visited by more than 750,000 customers each day.