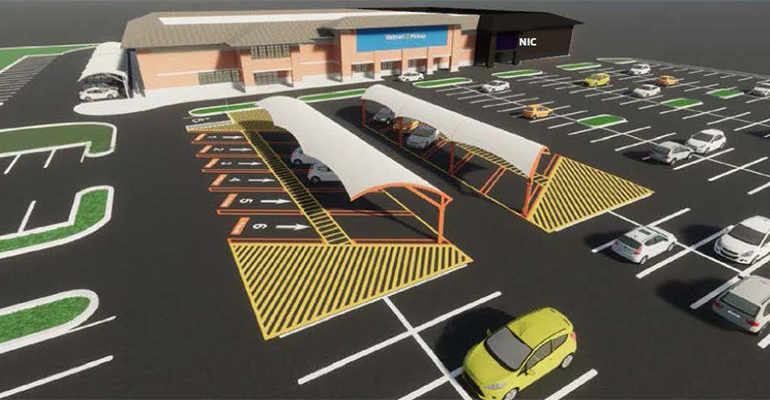 A rendering of the proposed Walmart pickup-only location in Lincolnwood, Ill.
News>Online Retail

Walmart has proposed a grocery pickup-only store for a former Dominick’s supermarket site in Lincolnwood, Ill.

Plans for the facility, dubbed Walmart Pickup, were presented at a Lincolnwood village planning commission meeting earlier this month. 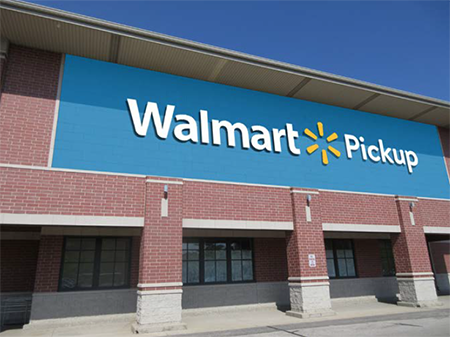 A Walmart representative at the meeting said the concept marks a different grocery pickup approach for the Bentonville, Ark.-based retailer and would represent its largest pickup-only site. The location also would be Walmart’s first stand-alone, drive-up grocery facility in Illinois, according to the planning commission report on the project.

Located on North McCormick Boulevard in Lincolnwood, the building would have no customer access and house 41,700 square feet of inventory space. Signs would direct customers driving through the lot to one of three canopied pickup bays, where they would park in a designated space and have their groceries loaded into their vehicle.

Customers would order their groceries as usual via the Walmart Grocery app or website and select a pickup time in one-hour windows. Pickup trips and parking spots would be coordinated to avoid congestion.

Walmart projects the number of pickup trips (including to and from the facility) at about 180 per hour, based on the location’s 24 pickup stalls, and 1,960 daily. Home grocery deliveries also would be made from the site, and Walmart estimates 30 such deliveries a day, the report said. About 30 to 40 employees would run the facility.

Walmart is aiming for the internet pickup store, if approved, to open sometime next spring, according to the Chicago Tribune, which first reported plans for the site.

Taking on growing rival Amazon-Whole Foods Market, Walmart has set a goal to provide online grocery delivery to 100 metropolitan areas, covering 40% of U.S. households, by the end of 2018 through its own services and third-party providers.

Last week, Walmart said it reached a couple of milestones: availability of online grocery delivery in over 50 markets (the 50th was Akron, Ohio) and more than 2,000 grocery pickup locations (the 2,000th was in Fayetteville, Ark.). The company projects that it will have 2,140 grocery pickup sites in 430 markets, covering 69% of U.S. households, by the close of its fiscal year at the end of January.

Walmart operates several stand-alone pickup facilities, including near its Bentonville headquarters and in Metairie, La. The company also is testing 24-hour automated pickup kiosks, which measure 20 feet wide by 80 feet long and can hold 30,000 items. The first launched in mid-2017 near Oklahoma City.

Currently, Walmart works with outside service providers such as Postmates, Doordash and Deliv for grocery delivery. Earlier this year, the company ended delivery partnerships with Uber and Lyft and abandoned a test in which Walmart employees delivered groceries to customers after their regular shifts.

Several technology-driven pilots of grocery delivery also are under way.

In late July, the company said it had teamed up with Waymo — formerly Google’s self-driving car project — to test an online grocery service in which driverless vehicles pick up customers at their homes and take them to the store to collect their orders. The service is being piloted in Chandler, Ariz. About a week later, Walmart announced a partnership with automation specialist Alert Innovation in a test of its Alphabot robot to help fill online grocery orders faster. The system, developed for Walmart, is being installed at the retailer’s supercenter in Salem, N.H.

And earlier this month, Walmart said it began testing a crowdsourcing-based service that enlists drivers using their own vehicles to provide last-mile delivery of groceries ordered online. Called Spark Delivery, the service is being piloted in New Orleans and Nashville, Tenn., and is due to be rolled out to several more metropolitan areas this year.