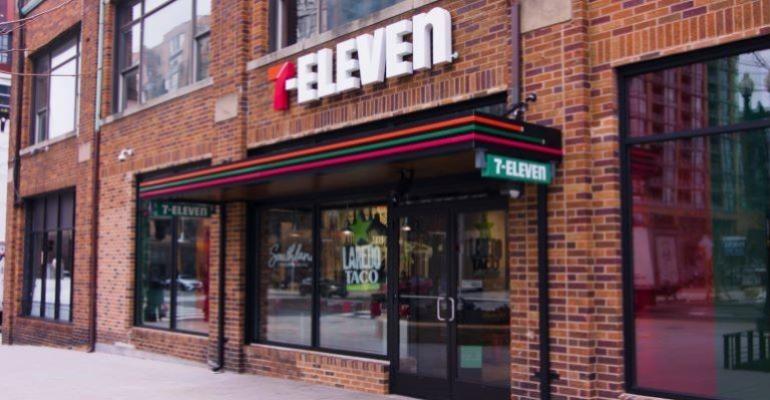 7-Eleven
7-Eleven's "Evolution Store" in Washington, D.C., is now open, and another is set to launch in San Diego in the coming months.
Product Categories>Prepared Foods

7-Eleven ups the ante on foodservice with more ‘Evolution Stores’

Nearly a year after a beta test in Dallas, convenience-store giant 7-Eleven is bringing its “Evolution Store” format to Washington, D.C., and San Diego, serving up a new challenge to supermarkets and restaurants in a format offering a wide range of fresh-made and ready-to-go food and beverages.

7-Eleven said yesterday an Evolution Store is now open at 504 K St. in D.C. (click to see video), and another is due to open in the coming months at 3504 El Cajon Blvd. in San Diego. The format, described by the Irving, Texas-based retailer as a “real-time, experiential testing ground,” made its debut last March at 1805 Sylvan Ave. in Dallas.

Like the initial location, the new Evolution Stores house a Laredo Taco Company restaurant offering tacos served on flour tortillas made from scratch daily plus a fresh salsa bar, 7-Eleven said. The company noted that tacos and meals include specialties not typically seen in quick-serve Mexican restaurants, such as authentic barbacoa, chorizo, carne asada, carnitas and breakfast tacos made with fresh-cracked eggs.

Customers also can get made-to-order specialty drinks served up in a full-service beverage format, including hot coffee drinks like flavored lattes and mochas as well as customized cold drinks such as smoothies, agua frescas and cold brew coffee.

Except for the Washington location, Evolution Stores house "The Cellar," an alcove offering an expanded selection of wine and craft beer, with a nearby growler station offering a rotating selection of local craft beer, cider and ales on tap.

On the food side, customers can choose from a cold treats bar with multiple frozen yogurt and ice cream that can be swirled to create new flavors with multiple toppings. Cookies, croissants and pastries baked fresh in-store daily as well.

The first Evolution Store, located at the Sylvan | Thirty retail and restaurant development in Dallas, opened in late March 2019.

"7-Eleven's mission is to give convenience customers what they want, when and where they want it," 7-Eleven President and CEO Joe DePinto said in a statement. "Our Evolution Stores bring outstanding innovation to life through new food and beverage platforms as well as through digital experiences."

7-Eleven said the first Evolution Store in Dallas exceeded its expectations, garnering strong reviews, crowds of customers and rising sales. Concepts that click with consumers are refined before being incorporated into the next generation of current and new store standards, the company added.

Along with mobile checkout, customers can use the 7NOW Delivery App for on-demand delivery of fresh food, beverages, snacks, groceries and household products delivered to their door.

Plans call for 7-Eleven to continue to expand Evolution Stores nationwide in 2020. The retailer acquired Laredo Taco and Stripes c-stores in South Texas as part of a 1,000-store acquisition from Sunoco in 2018.

“These new stores are invaluable learning labs, where new concepts are tailored to meet the needs of the communities they will serve from sunny southern California to the fast-paced world of the East Coast," commented Chris Tanco, executive vice president and chief operating officer at 7-Eleven. "We will continue to evolve based on customer feedback and we look forward to creating the next generation of convenience together."

Earlier this month, 7-Eleven announced a pilot of a cashierless, checkout-free store at its corporate headquarters in Irving. The 700-square-foot outlet, for employees only, requires visitors to use an app to to enter the store and shop. Customers take the items they want and exit, and a detailed receipt is displayed in the app automatically after the they leave the store. The test locations carries a selection of the 7-Eleven’s most popular products, including beverages, snacks, food, groceries, over-the-counter drugs and non-food items.