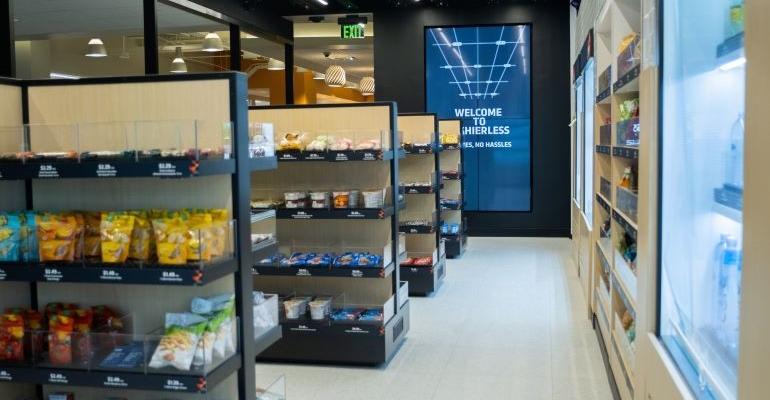 Convenience store giant 7-Eleven has begun testing a cashierless, checkout-free store for at its corporate headquarters in Irving, Texas.

7-Eleven said Wednesday that the 700-square-foot store is only for employees, who first must download an app and sign up. To shop, they use the app to gain entry to the store and then take the items they want and exit. A detailed receipt is displayed in the app automatically after the customer leaves the store.

The concept store carries a selection of the 7-Eleven’s most popular products, including beverages, snacks, food, groceries, over-the-counter drugs and non-food items, according to the company.

“Ultimately, our goal is to exceed consumers' expectations for faster, easier transactions and a seamless shopping experience,” Mani Suri, senior vice president and chief information officer at 7-Eleven, said in a statement. “Introducing new store technology to 7-Eleven employees first has proven to be a very productive way to test and learn before launching to a wider audience. They are honest and candid with their feedback, which enables us to learn and quickly make adjustments to improve the experience.”

A proprietary combination of algorithms and predictive technology enables the cashierless store’s system to discern individual customers and their purchases from other shoppers, 7-Eleven said.

“This in-house, custom-built technology by 7-Eleven engineers is designed for our current and future customers,” Suri added. “We continue to innovate, and coupling fresh, innovative, healthy food options with a frictionless shopping experience could be a game-changer.”

The cashierless store adds to another frictionless retail offering being tested by 7-Eleven. In pilot locations, the c-store chain has launched 7-Eleven Mobile Checkout feature, which allows customers to pay using their smartphone and skip the checkout line. The company noted that it also offers 7NOW delivery service in 28 markets, in which shoppers can place online orders and have the items delivered to them.

“Retail technology is evolving at a rapid pace, and customer expectations are driving the evolution,” according to 7-Eleven President and CEO Joe DePinto. “Our team is dedicated to continuing 7-Eleven’s legacy of innovation with industry-leading digital solutions. Most recently, that has included our award-winning 7Rewards loyalty platform, 7NOW on-demand delivery, mobile checkout and now our new cashierless store.”

Overall, 7‑Eleven operates, franchises and/or licenses more than 70,000 stores in 17 countries, including 11,800 in North America. The retailer has continued to expand its food assortment — now including high-quality sandwiches, salads, side dishes, cut fruit and protein boxes, as well as pizza, chicken wings and mini beef tacos — along with the selection of 7-Select private-brand products.

Amazon has whetted consumers’ appetite for cashierless purchases with its Amazon Go c-stores, which now number 25 in major U.S. markets. Powered by Amazon’s “Just Walk Out” technology, the Go stores use overhead cameras, weight sensors and deep learning technology to detect merchandise that shoppers take from or return to shelves and keep track of the items selected in a virtual cart. Customers use the Amazon Go mobile app to gain entry to the store through a turnstile. When they exit the store, the Just Walk Out technology automatically debits their Amazon account for the items they take and then sends a receipt to the app.

Currently, there are seven Amazon Go stores in Chicago, eight in New York City, five in San Francisco and five in Seattle, with a sixth “coming soon,” Amazon said. The stores range in size from an employee-only location of 450 square feet to larger outlets of more than 2,000 square feet.

Though not a direct competitor to supermarkets, the Amazon Go format is deemed a threat to brick-and-mortar food retailers given the strong appeal of its checkout-free shopping experience. Other retailers also see the concept as a way to penetrate new markets and reach new customers.