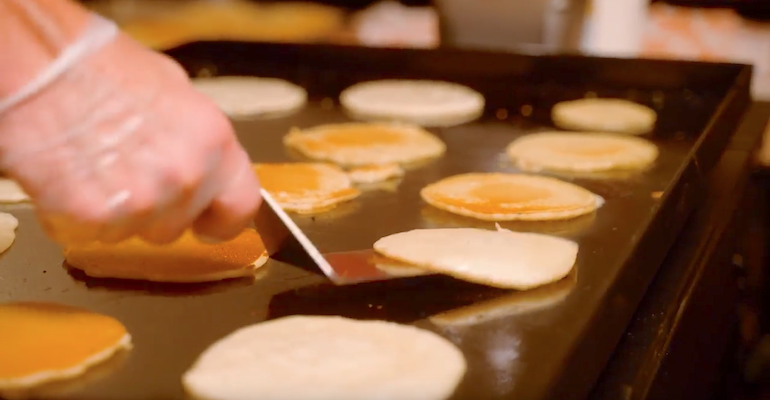 Hy-Vee has added breakfast to the menu of prepared meals offered by its year-old Mealtime To Go curbside pickup service.

Dubbed by the grocery retailer as the “Best Breakfast in America,” Hy-Vee’s breakfast menu runs the gamut from skillet, breakfast bowl and omelet entrees to pancakes, waffles, French toast and sandwiches, along with platters including classic breakfast items such as bacon, sausage, steak, eggs, homestyle potatoes and fresh fruit. Other offerings include a breakfast burrito, biscuits and gravy, oatmeal and a gourmet cinnamon roll.

Ordered online or via the Hy-Vee mobile app, Mealtime To Go breakfast items come as ready-to-eat or heat-and-serve meals.

Breakfast hours and offerings vary depending on the store location, and breakfast cocktails aren’t available at all stores, Hy-Vee said.

Customers order Mealtime To Go breakfast items — provided as ready-to-eat or heat-and-serve meals — online or via the Hy-Vee mobile app. When the order is ready, they receive an email confirmation and then head to the store and park in a designated Mealtime To Go parking spot, where they call the phone number on the sign. A Hy-Vee associate then brings the food out to the customer’s vehicle. Meals are ready in 20 to 30 minutes.

Hy-Vee launched the new breakfast menu late last week amid fanfare at its store in Blue Springs, Mo., where the grocer broke a Guinness World Record for the largest serving of pancakes. Eighteen Hy-Vee chefs at the store made 13,000 pancakes in just over seven hours, breaking the record of 12,716 set in 2017 in Moscow, Russia. An adjudicator from Guinness World Records was on hand at the event to declare Hy-Vee as the new record holder.

“What better way to celebrate the launch of our new breakfast menu than with a Guinness World Records title,” Tina Potthoff, senior vice president of communications at Hy-Vee, said in a statement. 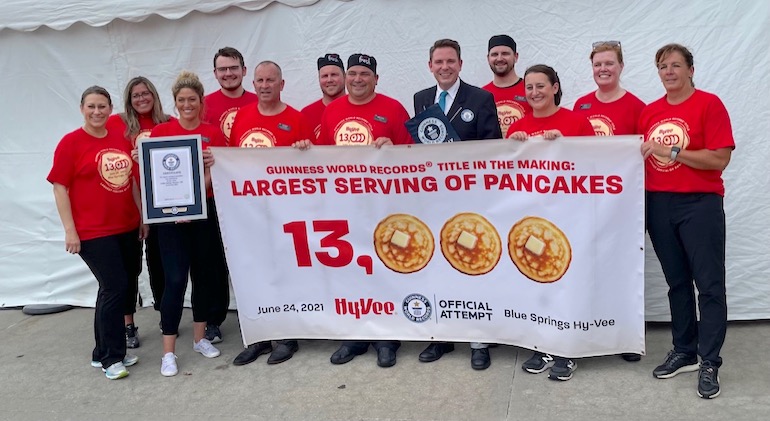 Hy-Vee unveiled the new breakfast menu amid fanfare at its store in Blue Springs, Mo., where the grocer broke a Guinness World Record for the largest serving of pancakes.

Hy-Vee launched Mealtime To Go in April 2020, and the service is now available at all stores, offering breakfast, lunch and dinner. Overall, the retailer operates more than 275 stores in Iowa, Illinois, Kansas, Minnesota, Missouri, Nebraska, South Dakota and Wisconsin.

In prepared foods, breakfast remains a largely untapped opportunity for supermarkets, grocers and industry observers say. Breakfast accounts for an average of just over five meals per week at single- and multi-person households with and without children, according to the FMI-The Food Industry Association’s U.S. Grocery Shopper Trends 2021 study. Thirty percent of consumers are now preparing breakfast at home, up from 22% in 2020, and 27% of those surveyed said they now order food or groceries online for pickup more than before the pandemic.

Similarly, Acosta’s “COVID Dining Journey: Eating at Home and Away From Home” study, released last month, found that 47% of adults and 53% of kids now eat breakfast at home, up from 37% and 48%, respectively, pre-pandemic. Also, 33% of adults said having enough time to make meals and clean up was a challenge, and 49% purchased restaurant food via store or curbside pickup in the last three months.