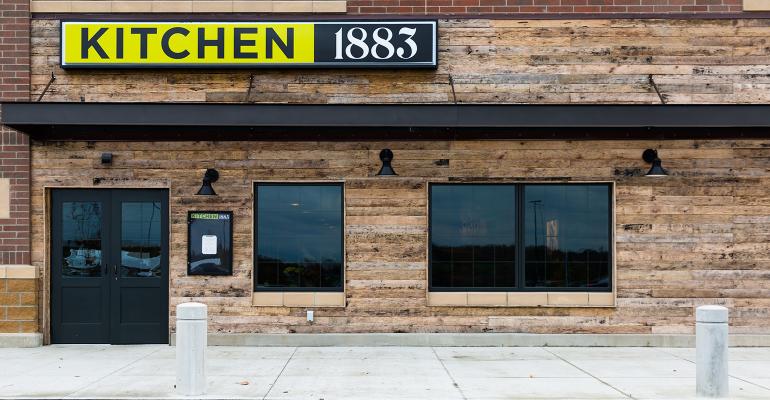 Kroger Co.’s first foray into the strand-alone restaurant business appears to be off to a good start, with positive reviews and reported waits of up to an hour at times for a table at Kitchen 1883 in Union, Ky.

The restaurant debuted last month, just as Kroger is preparing to open the doors on its new culinary training facility in downtown Cincinnati.

“2018 will be very exciting for us,” said Kristal J. Howard, a spokeswoman for Kroger, on the one-month anniversary of Kitchen 1883’s debut near the chain’s Cincinnati headquarters.

The restaurant is part of Kroger’s new Hospitality Division, which falls under the purview of the company’s Culinary Innovation Team. That group also oversees the culinary training center and the Prep + Pared meal kit line, along with other culinary initiatives outside the deli, Howard explained. The culinary innovation team is led by Daniel Hammer, VP of culinary development and new business.

The culinary innovation center, which is slated to open “very soon,” according to Howard, will be used to train chefs and help existing chefs from around the country share ideas, Kroger told the Cincinnati Business Courier at the annual shareholder meeting last year.

“We have a real commitment to the meal space,” said Howard. “When we talk about share of stomach, we’re not just talking about supermarkets, but we are talking about restaurants, and all places that customers go to for their meal needs. We want to be part of that solution, whether you are shopping one of our stores for fresh ingredients, or you are picking up one of our Prep + Pared meal kits, or if you want to enjoy a great meal and sit down and have a great experience, we now have Kitchen 1883.”

Howard declined to discuss specific sales volumes or check averages at the concept, but said the fact that it is generating repeat business and filling up its 94-seat capacity for some dayparts are indicators of its initial success.

The store is located adjacent to a Kroger Marketplace store, with its own separate entrance.

In fact, Howard said the restaurant has rapidly evolved its own culture and will continue to be operated as a distinct entity from the supermarket. Kitchen 1883 procures from its own network of suppliers separate from the store, and is staffed and managed separately from the restaurant.

The full-service eatery, which includes a bar with a focus on Kentucky bourbon, describes its cuisine as “New American Comfort — a type of fusion cuisine which assimilates flavors from the melting pot of traditional American cooking techniques mixed with international components.” The weekend brunch menu includes some of the same items with some additional breakfast offerings, including such trend-forward fare as shakshuka, a spicy Mediterranean egg dish, and ancient grain pancakes, along with a local favorite — goetta, a meat-and-grain sausage of German origin popular in the region.

The executive chef is Chris Bushelman (pictured above), who most recently was executive chef at Incline Public House in Cincinnati and previously had experience in restaurant concept development with Restaurants-America and Fortney Hospitality Group, where he helped launched the national franchises of Brothers Bar & Grill and Bar Louie.

Howard said she expects future restaurants to be adapted to local consumer demands, and it’s not clear yet if the Kitchen 1883 name will be used.

“It’s potentially one one of many concepts,” she said. “What we learn from Kitchen 1883, we will apply that to future concepts.

“What it will look like in every market will vary, because a big focus of Kitchen 1883 is on sourcing locally,” Howard added. “It may have a similar menu in another market, but we will try to have a nice balance with some tried-and-true staples, but then also blend in local tastes and local products and foods that are unique to that market.”