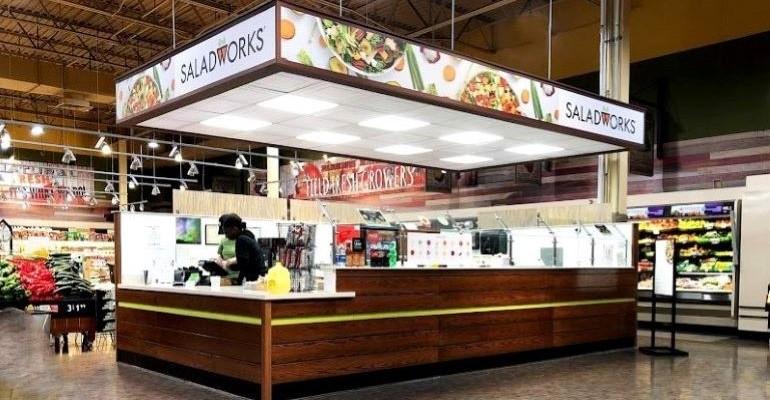 Building on successful pilots, Saladworks aims to open additional restaurants in ShopRite and The Fresh Grocer supermarkets in the Philadelphia area as well as in three more states.

Plans call for West Conshohocken, Pa.-based Saladworks to open a new location next month inside a Fresh Grocer store in Cheltenham, Pa. The made-to-order salad chain said it’s also opening two new outlets in ShopRite stores in Roxborough and Fox Street, also in Philadelphia. The franchisor added that it has locations under development in Delaware, Maryland and New York as well. Both grocery banners are part of the Wakefern Food Corp. supermarket cooperative.

Saladworks opened its first-ever supermarket location in February 2018 inside a remodeled ShopRite, owned by Wakefern member Brown’s Super Stores Inc., on Philadelphia’s Island Avenue. The strong customer response led Saladworks to open restaurants in the Parkside Town Center ShopRite in Philadelphia and The Fresh Grocer store in Wyncote, Pa. Both of those supermarkets are part of Westville, N.J.-based Brown’s, which owns and operates 11 ShopRite and two Fresh Grocer stores in the Delaware Valley.

“We have been absolutely thrilled by the results we’ve seen at the pilot location, and we’re confident that an expanded partnership with the ShopRite and Fresh Grocer brands will be hugely beneficial to both parties,” Eric Lavinder, vice president of development at Saladworks, said in a statement. “This partnership will greatly expand brand awareness for Saladworks and also expand our footprint in non-traditional settings.”

Besides grocery stores, other non-traditional locations for Saladworks include airports, military bases, office buildings and universities. The company noted that its compact footprint makes it a flexible prepared-foods option, as the initial pilot restaurant for ShopRite was a 170- to 250-square-foot unit.

The Saladworks locations serve up made-to-order salads from a choice of about 65 ingredients, including greens, pasta, protein and dressings. Customers also can order signature salads, sandwiches, paninis, soup, beverages and desserts.

Along with Brown’s, Saladworks said it has partnered with other ShopRite owners and major East Coast grocers for potential locations.

“Saladworks is on track for major franchise growth in 2020,” Lavinder added. “We have one of the most supportive franchise systems in the business, and we’re eager to add to our growing franchise family.”

Overall, Saladworks has more than 100 restaurants in 18 states and two countries. In August, Kelly Roddy joined the company as CEO from restaurant chain Schlotzky’s, where he was president. A former H-E-B executive, Roddy said Saladworks aims to grow its restaurant count 20% by the end of 2019.