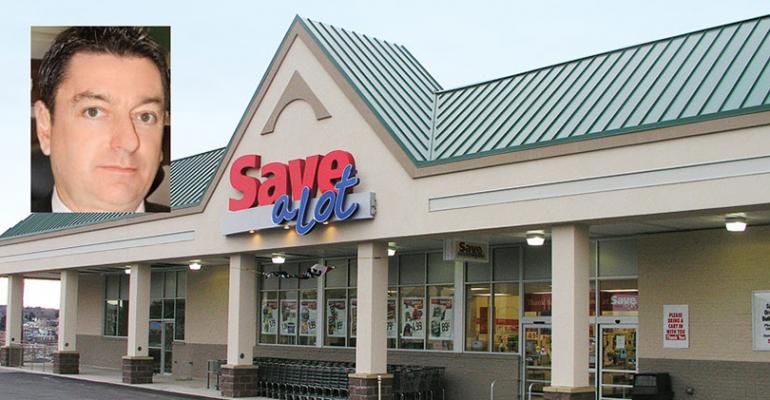 It’s been a tumultuous 12 months for Save-A-Lot to say the least.

The hard discounter began 2016 eyeing an IPO to fuel a West Coast expansion and begins 2017 under the ownership of a private equity group whose first significant move, announced last week, was abandoning the West Coast.

A slate of new initiatives under CEO Eric Claus, who joined the company 13 months ago, have been well-received by licensees, but came in the midst of a deflationary market and negative impacts of changes in SNAP benefits that sent same-store sales tumbling — down more than 5% when reported in October, shortly before Supervalu sold the chain to Canadian private equity firm Onex for $1.4 billion.

In an exclusive interview with SN last week, Claus said he remains upbeat and confident that the multitude of changes underway at Save-A-Lot — including the strategic decision to exit the West, new national brand selections and a comprehensive private label revamp — would take hold as business conditions improve. The goal, he explained, was to make the discounter work a little harder to become a primary shop for its customers.

“The biggest thing for us is that we still have a lot of customers within our trading areas that are light shoppers. Our biggest initiative is to convert them into heavy  users,” he said.

Claus is blunt about the reasons Save-A-Lot has been relatively lightly shopped: “We haven’t given shoppers what they wanted,” he said.

“We had some impediments to people doing that full grocery shop. One of them was the national brands. If half the country drinks Coke and I only have Pepsi, I’ve turned off half of the shoppers. If I want Hellman’s mayonnaise or Kraft mac and cheese, I have to go somewhere else.”

This opportunity was behind Claus’s initiative to stock Save-A-Lot’s stores with about 120 to 130 “must-have” national brand SKUs in addition to the branded goods brought in limited-time special buys.

Claus said the company was working with national brand manufacturers to create packages that are ready for store shelves and can click into the labor model. “As long as we have the volume they’ll do it,” he said. “If the volume isn’t there they won’t. And in that case we can suck up [the added cots] of those 120 items. It’s not the end of the world, that it would be a compromise in the short term.”

Private label continues to make up the vast majority of items as Save-A-Lot is in a state of change as well, with the reintroduction of the America’s Choice brand. Save-A-Lot, which acquired the brand from A&P where it was last deployed, will be flagship brand providing a better quality message and the ability to attack more trend-right tastes, Claus noted. It will also bring simplicity to the store experience by cutting down on the number of private brands on store shelves. Save-A-Lot stores late last year relaunched America’s Choice behind 13 “Creations” items Claus described as “over the top” takes on traditional comfort foods including frozen pizzas and lasagna, a macaroni and cheese and chocolate chip cookies. Of those, he said, 10 have taken off.

Today, another 150 America’s Choice items are being rolled out in formulations like natural and gluten-free, “items that Save-A-Lot might not have typically carried in the past,” he explained.

Finally, America’s Choice will address what Claus called the “over-proliferation” of private brand names at Save-A-Lot stores. This will be a gradual process, he said, and will begin by adding America’s Choice “endorsements” to the packaging of existing Save-A-Lot brands.

Claus said these changes will help Save-A-Lot get credit for the quality of its own-brand items.

“One of the challenges of having this over-proliferation of brands is that you confuse people. They don’t recognize what those brands are,” he said.

“But one of the things that surprised me to learn when I got here was the rigor went into that private label. We have great quality, but we’re not conveying that.  We have to work on getting credibility on the value proposition. A lot of great work has been done over the years, but we want to get it to the point where that’s easy to recognize and we can tell that tale.”

Claus is quick to note that these initiatives are not adding costs to the Save-A-Lot model, although it is absorbing lower margins on items like the Creations line.

We often say we have to limit it to X number of SKUs. But that’s not really true. What you’re limited by is the labor model to make it effective. That ends up being a number around that 3,000-SKU mark that we carry so we couldn’t go in and add 1,000 SKUs and not take anything out. You have to play by the rules of what hard discount is and keep your costs down as a company.”