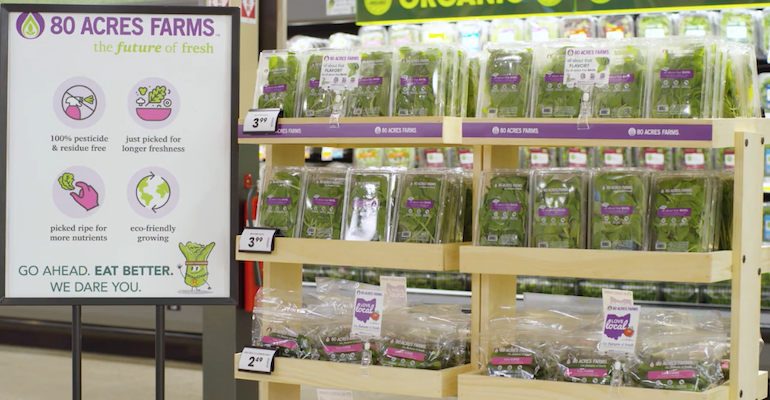 Kroger
Greens and vegetables from 80 Acres are slated to become available at 316 Kroger stores in Ohio, Indiana and Kentucky, as well as online, next week.
Product Categories>Produce & Floral

Albertsons Cos.’ partnership with indoor farmer Plenty rolls ahead at Safeway, Vons

Following a 15-month pilot, The Kroger Co. plans to roll out produce from vertical farm 80 Acres Farms to more than 300 stores.

Kroger said Tuesday that greens and vegetables from 80 Acres are slated to become available at 316 Kroger supermarkets in Ohio, Indiana and Kentucky and online starting March 15. The Cincinnati-based grocer initially partnered with the automated vertical farm in November 2019 in a test that later expanded to 32 stores.

Hamilton, Ohio-based 80 Acres operates four robot-powered indoor farms in the greater Cincinnati area, along with locations in North Carolina, Arkansas and Alabama. The company said automation and analytics enable it to monitor conditions 24/7 and harvest the produce at its peak of freshness and provide 300 times more food than a conventional farm. At the same time, eco-friendly farming methods use 100% renewable energy, consume 97% less water, and are pesticide- and residue-free.

Kroger noted that the partnership contributes to its Zero Hunger | Zero Waste sustainability and social responsibility plan, which aims to end hunger in local communities and eliminate waste companywide by 2025.

“Everyone deserves easy access to fresh, affordable, delicious food,” Dan De La Rosa, group vice president of fresh merchandising at Kroger, said in a statement. “This newly expanded partnership means more communities will have just-picked produce at their fingertips 365 days a year. We’re proud to partner with 80 Acres Farms as we work together to create a world with Zero Hunger | Zero Waste.” 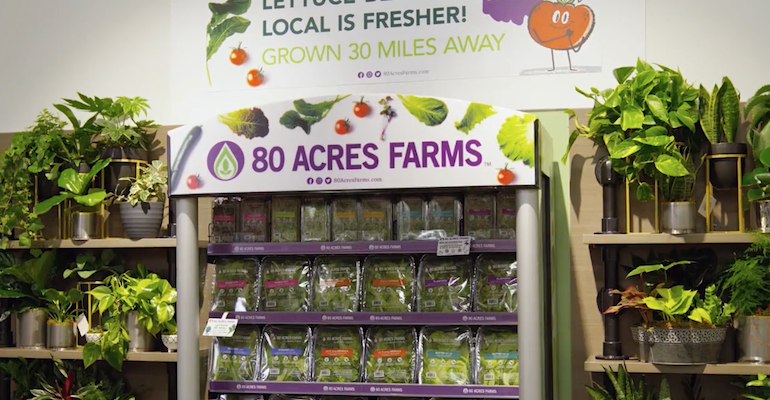 Products from 80 Acres include a range of salad blends, microgreens and herbs plus a grab-and-go salad and protein kit, baby cucumbers and cherry tomatoes. The company said its state-of-the-art farm in Hamilton will support the new Kroger partnership, bringing 10 million servings of fresh produce to Midwestern communities.

“Kroger leads with their commitment to fresh by providing customers access to fresher and more nutritious produce,” commented Mike Zelkind, CEO and co-founder of 80 Acres Farms. “Consumers are looking for more nutrition from their diet and want to trust that their food is safe and chemical free and it will last longer in their refrigerators. The 80 Acres Farms brand delivers against all those promises.”

Since November 2019, Kroger also has partnered with Infarm, a Berlin-based urban farming network, to operate living produce farms at QFC supermarkets in Washington state. Using hydroponic farming, the produce grows on site at the stores, eliminating the need for extended transportation and storage and providing a more eco-friendly product.

Other big grocers also are enlarging their offerings of vertically farmed produce. On Tuesday, South San Francisco-based vertical farming company Plenty said its partnership with Albertsons Cos., the nation’s second-largest supermarket operator, has expanded to 17 new Safeway and Vons stores in Northern California, raising the total number of stores selling its produce to 53 in the region. 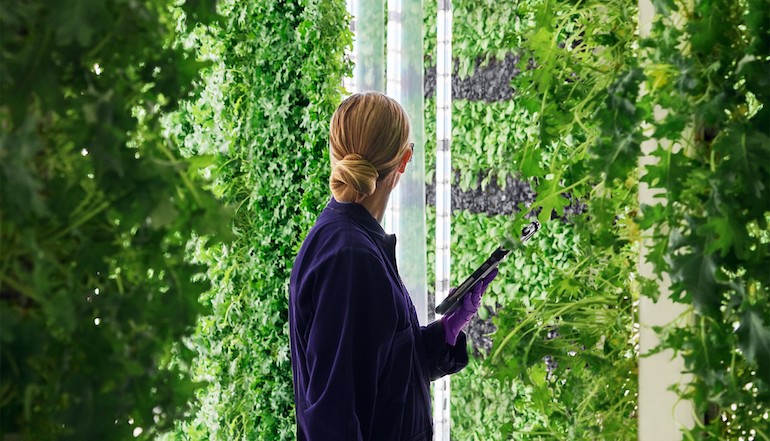 Plans call for Plenty to roll out its indoor vertically farmed produce to more than 430 Albertsons Cos. stores.

The rollout is part of the multi-year pact announced in August that will bring Plenty produce to more than 430 Albertsons Cos. supermarkets in California. Plenty noted that the new stores are mainly in smaller communities, making its brand the first indoor, vertically farmed produce available to those shoppers. Products include baby arugula, baby kale, crispy lettuce and a mizuna mix.

Plenty also has launched Text-a-Farmer, a display next to its greens in stores that lets shoppers text questions while shopping and get an answer directly from a Plenty farmer. The messages can address such questions as, “Do you use pesticides on your leafy greens?”, “Is your packaging recyclable?” and “How do I keep my greens fresh for longer?”, the company said.

“At Plenty, we’re proud of the fresh, flavorful greens we grow in our farm, and of our transparent growing process, which lets us track a plant from seed to kitchen,” stated Nate Storey, co-founder and chief science officer at Plenty, which reported that it’s currently building the world’s highest-output, vertical indoor farm in Compton, Calif. “The Text-a-Farmer program is one way we can directly connect with customers and hear their personal questions and experiences. We’re always excited to engage with shoppers and help them learn more about our company and the delicious produce we grow.”