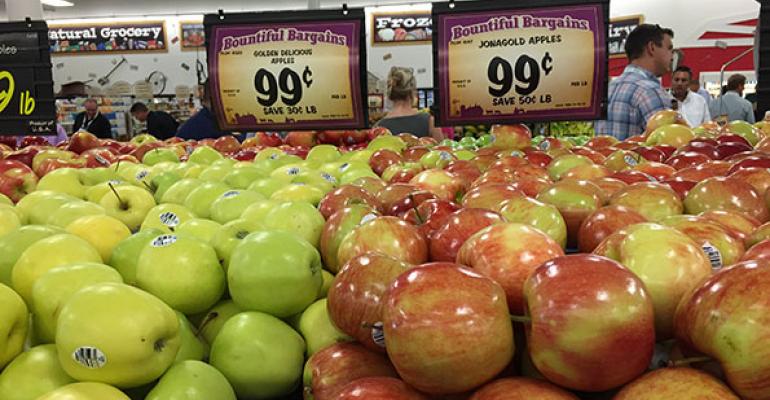 With consumers increasingly focused on the perimeter, many retailers are making investments in the produce department as a way to differentiate their offerings or simply bring shoppers into the store.

Other retailers have been playing catch up as competition in produce heats up.

The Fresh Market, for example, has worked to lower produce prices after seeing too much of a price gap over its competitors’ prices. Interim CEO Sean Crane told investors last week that the retailer had made efforts to close the gap in the previous quarter.

Enjoying results from the initiative may take time, however. The Fresh Market’s comparable-store sales dipped in the second quarter, and Crane said overall pricing and promotional investments were “less effective than anticipated.”

Crane outlined a few reasons why the produce investments have taken time to sway customers.

“One is you need to shop the store a few times to really start to feel the improved pricing. And then, we also have a little bit of a headwind in that as customers shop our store, our research indicates that even if we are equally priced, there is a price perception issue because of the premium attributes of the experience around it. So, we have to keep finding ways to invest in price, but also better communicate it,” said Crane.

Similarly, Sprouts Farmers Markets has noticed a “more aggressive approach on promotions” in the produce department from its competitors, president and COO Jim Nielsen told investors earlier this month.

“It's primarily coming from our conventional competitors within each geography. We're seeing some specialty retailers do some in-store, but we don't — we haven't seen any negative impact to that,” said Nielsen.

He added that he expects the same level of produce promotions from competitors in the third quarter and possibly through the end of the year.

Sprouts has always used produce as a differentiator, and often makes investments in order to maintain a competitive edge.

At the same time, one of the main factors impacting produce sales this year is deflation, executives noted. Sprouts still sold the highest amount of produce by volume in the second quarter this year since the first quarter of 2014.

“So we're moving a ton of produce, no pun intended there, and we're seeing the basket size in terms of number of items grow at the highest level in two years,” said Nielsen. “So I don't anticipate the conventionals backing off in terms of their investment and, if they do, there is going to be upside for us. If they don't, it's built into our guidance.”

How much Sprouts needs to invest in produce moving forward will depend on inflation and competition, new CEO Amin Maredia said.

“We had a pretty rough first half of the year in produce this year. I think that the marketplace will dictate how much we need to invest,” said Maredia.

One conventional retailer that has begun to see the fruits of its investments is Ahold USA. The retailer has invested in price across the perimeter and remodeled produce departments in many of its stores.

“And it's not only the choice and the signage, but also the customer engagement with our employees has been made the big step forward in this produce department by training and education,” Ahold CEO Dick Boer said in an earnings call earlier this month.

“Our growth in volume market share proves that our customers reward us for offering better quality and value to them,” said Boer.

After an initial lag time where produce volume was up but dollar sales turned negative, Whole Foods Market has also experienced positive results from stores where it has invested in produce.

“So we’ve been encouraged and started to see in the last couple of periods where the actual sales have gone positive, and those produce departments are comping positive now so that the units now have increased in a lot of them above where the investment is,” president and COO A.C. Gallo told investors in July.

“That’s been very encouraging to us. And we definitely have plans to use those learnings in additional stores and regions as we go forward, especially next fiscal year.”