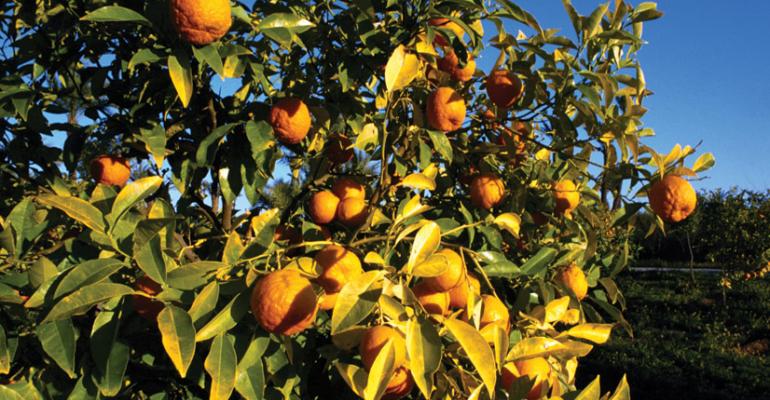 Growers in Florida and California are anticipating a drop in citrus production this season.

“This year has been extremely difficult for the industry. We had a very early frost snap that’s affected production,” said Joel Nelsen, CEO of the California Citrus Mutual growers association.

“In fact, we believe we lost roughly 25% to 30% of the navel orange crop, 40% or so of the remaining mandarin crop — which is the tangerines or clementines, however you wish to classify — that and a small percentage of the lemon crop.”

In addition to hurting the overall citrus supply, the weather has added to production costs.

California farmers have had to invest in 45 days of frost protection this year, as well as efforts to identify and remove frost-damaged fruit from the supply, said Nelsen.

Florida’s supply is also lower than expected and continues a downward trajectory. The USDA citrus report for Florida in January forecast 115,000 boxes of all oranges for the season, down from the expected 121,000 in the December forecast. Production last year was 133,000, which was also a lower yield than 2011-2012 production.

“Last year for the 2012-13 season we saw a great amount of citrus droppage. This season we weren’t sure what to anticipate when we set the first forecast in November, but as the season has progressed we’ve seen high drop rates on both the Valencia and the early midseason crops as well as smaller sizes,” said Jim Ewing, USDA state statistician at the National Agricultural Statistics Service.

“So when you put those together, the smaller sizes, the higher droppage, the production is not where we anticipated it would be in November and certainly less than last year.”

USDA has had to bring down the Florida forecast 10 million boxes this season, said Ewing.

Although Florida is struggling to combat citrus greening, Ewing is optimistic about the industry.

“The numbers are not encouraging, let’s be honest. Last year was down 6% from last season and we’ve already come down 8% so far this season. But the encouraging thing I think we’re seeing is resources get put in or investments in Florida citrus.”

In California, Nelsen expects to have a good supply of fruit until the end of May. Typically California citrus production runs into June and July. California growers will likely be increasing wholesale prices somewhat to account for increased costs, but don’t plan to increase costs so much that retailers will turn to alternate supplies, according to Nelsen.

“We’ve got a lot of good fruit here in California and we’re going to move it, hopefully at slightly higher FOBs, but there’s going to be some good quality product available at least through the end of May.”