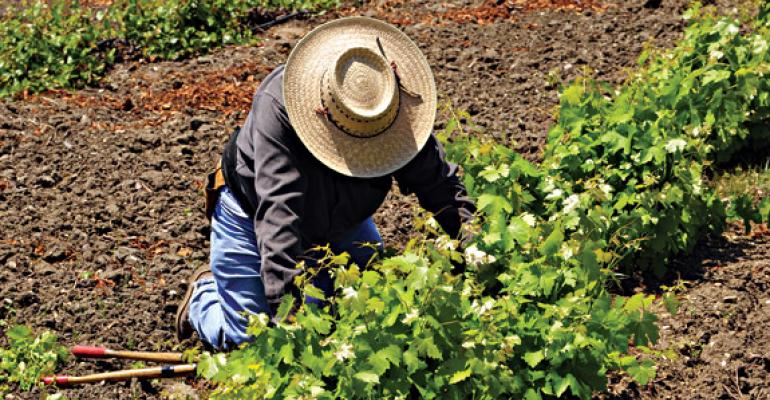 Last April, the state of Georgia approved HB 87 — a tough new immigration reform law inspired by Arizona’s Senate Bill 1070 — which would give the state’s police officers the power to check the immigration status of anyone suspected of any crime, including traffic violations. The law also would impose prison sentences and fines on anyone who knowingly transports or harbors illegal immigrants, would require that all businesses in the state use E-Verify, the federal electronic identity verification system, to confirm that employees have legal authorization to work in the U.S., and would punish anyone who uses fake identification to get a job in the state with up to 15 years in prison and up to $250,000 in fines.

For the state’s farmers, the approval of the bill could not have come at a worse time. Like many states where the agriculture industry produces a lot of crops that must be harvested by hand, Georgia has come to depend on migrant laborers, who slowly work their way up from Florida to the Northeast and mid-Atlantic each year. In 2011, rumors of harsh treatment and potential deportation swept through the region’s Hispanic communities, and a large portion of the labor force simply passed through Georgia and neighboring Alabama, which had introduced a similar law of its own.

According to a survey conducted by the Georgia Fruit and Vegetable Growers Association and analyzed by the University of Georgia’s Center for Agribusiness and Economic Development, this led to a shortage of more than 11,000 workers during the early summer harvest season. Combined spring season losses for the state’s blueberry, blackberry, watermelon, cucumber,

bell pepper, squash and onion crops totaled almost $75 million, according to the survey. On an annualized basis, losses would be almost $400 million, if Georgia’s farms can’t find a way to replace this lost workforce.

For retailers, the price impact of one disappointing harvest in one state was similar to a major freeze or weather event — the effect was temporary and supplies of these products were available elsewhere. But Georgia was among 30 states that considered this type of crackdown legislation last year. More than a dozen of these bills failed, but other states, including Alabama, Indiana, South Carolina and Utah, ultimately passed similar laws.

For now, farmers are dealing with uncertainty. A federal judge last year issued an injunction against several sections of the Georgia bill before they were enacted. And, the U.S. Supreme Court last month announced that it will hear a case that will decide whether Arizona and other states can create their own rules for fighting illegal immigration. Until recently, that task has been the exclusive purview of the federal government.

“It’s really a little too early to tell exactly what’s going to happen this year. Growers are trying to make decisions now about how much they are going to plant,” said Charles Hall, executive director of Georgia Fruit and Vegetable Growers Association.

When the UGA study was conducted in August and September 2011, about half of the growers that responded said that they were planning to reduce their acreage anywhere from 25% to 40%, Hall noted.

“I don’t think it’s going to be that bad,” he said. “But again, if our legislature were to make some changes to the legislation that created an even more unfavorable work environment, it could be that bad. At this point, it’s just kind of hard to know what’s going to happen this spring.”

The Supreme Court decision could also have a major impact on Georgia and other states. If enforcement of the strictest statutes of these laws is allowed, “we could see a major change in the migrant workforce coming through Georgia in the spring,” Hall said.

Many advocates for these strict policies tend to point to high unemployment rates within their states to argue that migrant labor is not needed, and that illegal immigrants are essentially stealing jobs from U.S. citizens. In Georgia, for example, the unemployment rate hovered around 10% when the law passed.

But as Hall and others point out, picking berries for 9 or 10 hours a day during the summer in South Georgia is not easy work. The nature of the job is also seasonal and temporary, and often far from cities. Workers must continue moving to the next harvest in order to stay employed.

In a testimony to the Senate Judiciary Subcommittee on Immigration, Refugees, and Border Security, Connie Horner, an organic blueberry farmer based in Homerville, Ga., explained how challenging it is to find and hire domestic workers for these jobs.

“Besides the seven H2A [agricultural visa] workers we brought from Mexico in 2010, we were required to send out 58 local hire letters [to be compliant with H2A protocols]. We received no response from 25. Eighteen were hired but never showed up, and of the 13 that were hired and came to work, six worked three days or less, one lasted longer than two weeks, and none finished the season.”

Both Alabama and Georgia have considered using non-violent prison inmates to fill some of the labor gap, but early results from a pilot program in Georgia last summer were mixed at best. Farmers complained that many of these workers had quit the physically taxing jobs shortly after accepting them, and due to their inexperience, the workers that remained were roughly half as productive as their migrant counterparts had been, according to a report in the Atlanta Journal Constitution.

H2A, the existing federal visa program for agricultural workers, also presents considerable problems. As Horner’s Senate testimony notes, employers must prove that they are unable to find domestic workers to hire for their available positions by maintaining advertisements and sending out hire letters each season. That’s just the start of the challenges, according to Frank Gasperini, executive vice president of the National Council of Agricultural Employers in Washington.

After proving that they have been unable to fill available positions domestically, farmers must file paperwork with the U.S. Department of Labor and their state workforce agency to get approval for any H2A visas. Once the Department of Labor approves the number of visas it will grant for an application, farmers have to go through the U.S. Department of Homeland Security and the U.S. State Department to get their workers approved. Almost three quarters of respondents to a 2010 survey by NCAE said that the extensive approval process made their H2A hires an average of 22 days late to harvest.

In addition, the program is currently far too small.

“H2A, right now, is only supplying about 50,000 of the million and a half ag field workers in the country, and it’s not doing very well,” said Gasperini. “If the country went to laws like Georgia’s and Alabama’s, we would probably need about three quarters of a million to a million [documented] workers overnight. The H2A system can’t handle that. The system does need to be fixed for the people who can use it, but it’s such a small portion of the total ag labor supply right now.”

The system clearly needs to be fixed. Without a reliable domestic labor force, U.S. fruit and vegetable farmers have the choice of either cutting acreage, switching to machine-harvested row crops, or, in the case of large growers, moving more of their fields to Mexico and elsewhere.