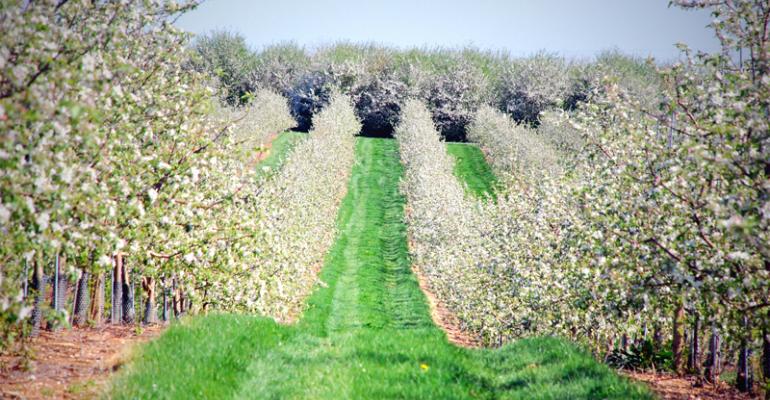 The New York Apple Association anticipates at least 29 million bushels, if not more than 30 million.

“We are expecting a wonderful harvest. I think our numbers are going to be very, very good. The quality looks great. We’ve had just a very good growing season. The trees came back very strong,” the New York Apple Association president Jim Allen told SN.

New York produced only 17 million bushels last year, but that light crop might be helping this year’s harvest.

“Those trees were not under any stress last year, so when they came back this spring with their new buds it was a huge return blossom, so we have a very very good crop on the trees as we speak right now,” Allen said.

“The trees were able to store a lot of energy over the last year," she said.

"Not to mention we’ve also had a significant amount of plantings that have gone in over the last several years and put those two things together and you’re going to see a great crop like we’re expecting to see this year.”

The Michigan Apple Committee also anticipates a 30 million bushel crop, one of the state’s largest. Last year, the U.S. Department of Agriculture estimate was only 2.7 million bushels.

“It is going to be a great year, and especially after the crop issues of last. It’s a welcome crop," said Smith.

Washington state is expected to produce 10% fewer apples than 2012, but will likely still come to market at 140 million bushels, according to materials from the USApple Outlook Conference.

Overall, apple production is expected to be up 13%.

Although the USDA suspended its apple forecasts due to the sequester, the industry continues to develop its own estimates. The major apple growing states participate in “breakout sessions” at the USApple Outlook Conference to discuss what they've been observing in orchards, according to Allen.

With this additional supply, apple wholesale and retail prices will likely drop.

“So we are adjusting our wholesale price to move the volume, but we really need the retailers to also adjust the retail price down. They need to pass the savings on to consumers in order to move this crop.”