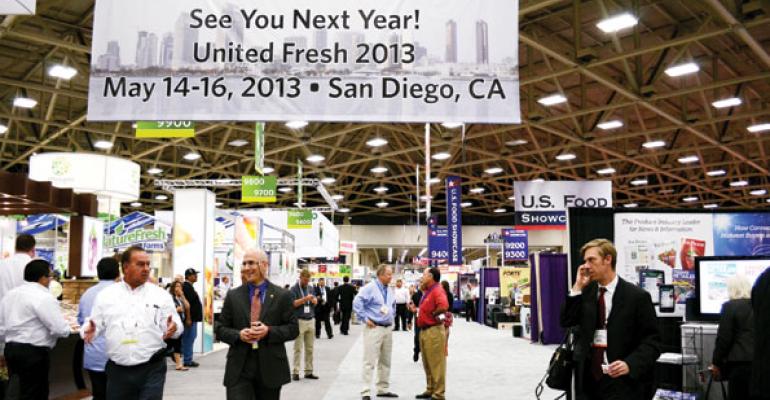 Presenters and panelists at this year’s United Fresh Produce Show in Dallas dared to interpret the complex web of consumer desire.

It turns out, produce shoppers are sometimes just looking for a friendly face.

On one panel, several produce managers mentioned they go out of their way to get to know their customers and make them feel comfortable in their stores.

“And when you introduce yourself to them, they get to know you. There’s a trust level there, and that’s what you want every day because you want that customer to come back several times a week,” Kaminski said.

It might seem customers are too busy to chit-chat, but according Hy-Vee Produce Manager Mike McElmeel, knowing customers’ names and sharing associates’ names builds loyalty. If you do that, “they’re going to come back day after day,” he said.

Besides making customers feel at home, fostering customer relationships positions the store as a trusted resource.

At Kroger, Brian Langdon said produce associates are trained to engage with customers and get to know them so shoppers know who is available to answer questions.

Starting a discussion with shoppers can provide an opportunity to slow fast-paced consumers down and encourage them to try new fruits and vegetables. At Jewel-Osco, Kaminski will simply ask, “What’s for dinner tonight?” giving him a chance to suggest a complementary produce item or personal recommendation.

The produce managers make sure to acquaint themselves with their future customers, too.

It’s important to get out in the community, noted Brian Corbitt, produce manager at Bel Air Market/Raley’s Family of Fine Food Stores in Sacramento, Calif. Corbitt said kids are really receptive when he visits schools and introduces new kinds of fruits and vegetables.

Instead of visiting schools, Corey Conrad from Coleman’s Food Centres in Corner Brook, Newfoundland, brings the schools to his store.

“We even invite kids from schools to come into the stores, and we give little tours for kindergarten all the way to grade 12 just to let them see and experience what’s new and what’s in a produce department,” Conrad said.

Prompted by moderator Steve Lutz from the Nielson Perishables Group, the panelists described how consumer trends translate to their stores. Several of the award-winning produce managers said their shoppers are looking for more organic fruit and vegetable options.

“They want more variety of organics. Organics is a big thing now,” said Kroger’s Langdon. “The percentage has just gone up quite a bit. And the price is kind of comparable to conventional food, so they are looking and they are going to the areas where it is organic.”

A certain group of customers will pay anything for organics, according to Raley’s Corbitt. But when the price difference is only 10 cents, Corbitt said people who wouldn’t buy these items will give them a try. More than a 30-cent difference, though, and those on the fence will stray away, he said.

Big Y Foods’ John Heon agreed. “If it’s within 20 to 30 cents they seem to buy it, and they want more variety. They want as much organics as you can get.”

At Coleman’s Food Centres, Conrad said customers that come in the store looking for organic produce are willing to pay a premium price. “It’s just trying to get the variety right now is what we’re looking for.”

And, presentation of organic produce can make a difference in sales.

Kaminski’s Jewel-Osco store moved organic bananas from a table display to a rack next to the conventional banana rack, and doubled and tripled sales, he said.

When the managers weighed in on what their customers expect of “local” food, Hy-Vee’s McElmeel said his Illinois customers want to know how close the produce item’s origin is to the store. “If it’s Midwest, or if it’s in-town that they are getting their product, they want it as close to where they are living as possible.”

Produce Manager Brian Collegnon of Rueben’s County Market in Hartford, Wis., said he’ll name the city or town the product comes from, and noted that customers will ask for products from specific farmers. “They know that farmer already because we built a reputation of having him grow products for us year after year.”

In the produce-abundant state of California, Raley’s limits the use of the word local to describe products coming from within 50 miles of the store, Corbitt said.

In the presentation “Restaurant Trends: What’s on the Plate for Foodservice?” Datassential Director Maeve Webster said 69% of consumers said they are likely to order a menu item featuring locally sourced produce.

Interest in seasonal produce menu items is also big, with 64% of consumers reporting they are likely to order items featuring in-season fruit and vegetables. The number of limited time offers featuring seasonal fruits and vegetables has skyrocketed, according to Datassential’s tracking data.

“Seasonal use of vegetables is at an all-time high in the restaurant industry and we see no indication that this is going to slow down going forward,” said Webster, who added whole restaurant concepts have been created around the idea of using produce at the height of its in-season freshness.

Although consumers are interested in healthful menu options when eating out, Webster said they are not willing to give up good taste, price — unless there’s a perceived sense of value — or indulgence.

To get a feeling of indulgence, consumers don’t necessarily need decadent high-calorie food. “Indulging can just feel like they are satisfied. They are leaving like they’ve had an experience, they’ve gotten their money’s worth,” Webster said.

As an example, Webster explained that the turkey burger options are generally priced higher than other burger options, and on top of that, are less likely to include garnishes like cheese, bacon and mushrooms.

Since healthful options on restaurant menus can be more expensive, with fewer add-ons, incorporating fruits and vegetables can give customers more of a sense of value.

Healthy menu items should be as exciting as other menu items, Webster said, giving the example of turkey burger at one restaurant that includes red onion jam, brie, cranberry mayo and sweet potato crunch.

United Fresh President and CEO Tom Stenzel highlighted the importance of honoring these produce managers, but noted the awards are also about more than the individuals. “It’s about 25,000 stores and more. This is where the rubber meets the road. This is where our industry interacts with our customer every day,” he said. “So let’s use this as a model, a model for excellence. A model where we as an industry can satisfy and absolutely delight that consumer every day of the year.”

Six managers were also singled out for a grand prize, each receiving a $1,000 award. The awards program, in its eighth year, was sponsored by Ready Pac.