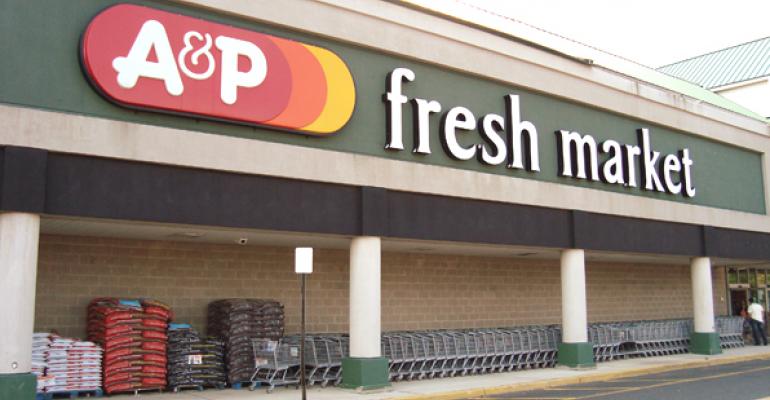 MONTVALE, N.J. — Industry observers said they expect the “usual suspects” will shop for A&P now that the struggling retailer has acknowledged it would seek a potential sale — but they said the prospect of a straight strategic takeover was slim.

A&P told its employees last month that it had engaged the investment bank Credit Suisse to conduct a review of strategic alternatives, including a potential sale. The parent of A&P, Pathmark, Food Emporium and SuperFresh stores said the review was sparked by a need for additional funding as the company has continued to lose money since exiting Chapter 11 bankruptcy protection more than a year ago.

In a memo distributed to employees, A&P Chairman Greg Mays said efforts to improve efficiency and reduce debt have helped to significantly strengthen A&P’s balance sheet, but the company was still losing money. A&P is controlled by the private investment firm Yucaipa Cos., which has not provided further comment. Published reports said the company could be valued at $1 billion or more in a sale.

“[F]uture growth requires constant capital investment in our stores, our infrastructure and our people. Accordingly, having made significant progress in improving the financial foundation of the current business, A&P is now in a position to consider strategic future growth plans that will focus on raising new capital to meet these investment goals,” the memo said.

Mays said the review would consider raising new capital from investors or partners, a refinancing or a sale.

“Our goal is to ensure that the company is well-positioned for future success that will benefit A&P, our associates, partners, suppliers and customers — and we will ultimately pursue what is the best possible course for all constituents,” the memo said. “Indeed, it is possible we will decide not to pursue any of these alternatives and will instead choose to simply capitalize our growth plan at a slower pace from internal free cash flow. While it’s premature to speculate on the exact outcome of the strategic review process, we want to be clear that this financial initiative is the first step toward building a stronger future for our business.”

Sources told SN that A&P had value in specific locations that would be of interest to strategic competitors but believed selling the entire chain to a single operator would be difficult, citing a struggling store base in need of heavy investment.

“I am sure all of the supermarkets who trade in A&P and Pathmark’s area have their own list of A&P and Pathmark stores they like,” Matthew P. Casey, president of the site selection firm Matthew P. Casey & Associates, Clark, N.J., told SN. “I think what is likely to happen is a real estate firm can come in, buy the whole thing and chop it up: A dozen stores to ShopRite, a dozen stores to Stop & Shop, a few to The Fresh Market, and so on.”

Sources noted one possibility is Cerberus Capital Management, which has shown a willingness to take on struggling chains in the past with an eye on realizing real estate value and on potential deals. That group most recently took on Supervalu’s Acme, Shaw’s, Jewel and Albertsons banners. The former two chains operate in and around A&P’s Northeast base.

Christian Haub, A&P’s former chairman, told SN he felt a sale of the entire company would be “very challenging.” (Haub, who left A&P in 2011, said he had no knowledge of the current management’s plans).

“The challenge for anybody who is going to take a look at A&P is that the store base is still under-invested and the position in the market is very challenged from a relative price position against ShopRite and Stop & Shop in the New York area,” Haub said. And though Ahold would likely be interested in specific sites, Haub pointed out that company walked away from a deal to acquire then-independent Pathmark stores in 1999, citing antitrust concerns. More recently, Haub said Ahold “wasn’t interested” in engaging the company in acquisition discussions during its bankruptcy.

A spate of recent merger activity in the supermarket sector, including the Supervalu breakup and the pending acquisition of Harris Teeter, may have also sparked A&P’s desire to seek a buyer at this time, Haub speculated.

“I am sure they are hoping that these deals are an indication that activity is up in the sector and that this might be a good time to test the market,” he said.