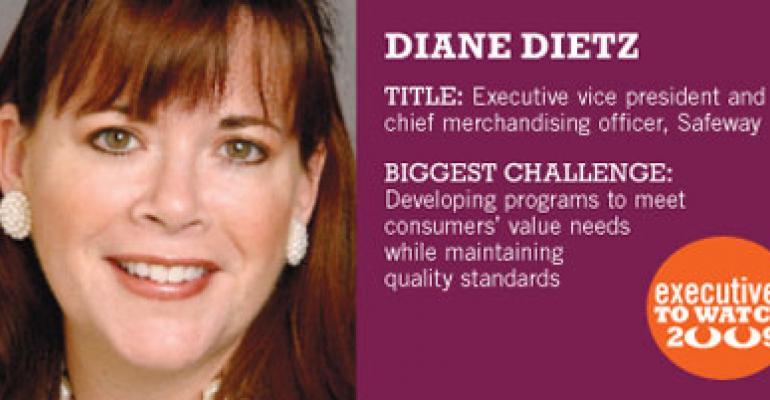 PLEASANTON, Calif. — For Diane Dietz, the move from a CPG company to Safeway has been a smooth one.

“During my previous career with Procter & Gamble I spent a lot of time with retailers, so retail is definitely a passion area for me,” she told SN.

Dietz, 42, joined Safeway last summer as executive vice president and chief merchandising officer to fill a position that had been vacant since Brian Cornell left a year earlier. In her position at Safeway, she oversees all merchandising, marketing and manufacturing, “which crosses a lot of touch points and disciplines,” she noted.

Dietz was with P&G for nearly 20 years, capping her career there as vice president and general manager of the company's oral care business, based in Cincinnati.

She said she sees a lot of similarities between P&G and Safeway.

The biggest challenge she faces at Safeway right now lies in making sure the brand continues to fulfill its value promise in a weakened spending environment.

“The current difficult economy impacts what consumers want and what we need to do to meet their needs — to do the best we can to deliver significant quality and the best value,” she said.

“The focus is clear,” she continued. “Having worked for A.G. Lafley at P&G, one thought he drilled into us is: ‘The consumer is the boss.’ So the only way I know how to operate is to put the consumer in the center of all we do, and to focus the marketing team's effort on staying in touch with consumers and figuring out what they're looking for in terms of value and innovations.”

Dietz said she credits the management team at Safeway for delivering quality and value through various store-level programs, including $5 Family Fridays, introduced last summer, which offers entrees like rotisserie chicken or meat loaf priced at $5 per serving, compared with a regular price of $6.99 to $7.99; and a series of 48-hour sales, which started at the onset of football season, in which items like chips, soft drinks and bottled water were promoted to tie in with broadcasts of college and professional games.

“And we tried to include some healthy items into those promotions, such as grapes, strawberries and avocados,” she added.

Dietz said she is also continuing to oversee the ongoing rollout of Eating Right and O Organics, the proprietary grocery lines that Safeway is now offering to other retailers.

Chuck Cerankosky, an analyst with FTN Equity Capital Markets Corp., Cleveland, said Dietz and her team appear to be on track to deliver a value message to consumers — though it might be a little tougher for Safeway, given the quality and ambience of its lifestyle stores.

“You've got a consumer that's stressed out, including people who still want to eat healthy and buy a lot of fresh foods while still finding ways to save money, so the challenge is to make them aware of the value of Safeway's private-label offerings vs. national brands, and also the value of its prepared foods vs. eating away from home.”

Asked about her management style, Dietz said, “It's all about empowering people to succeed. The best managers are those who are able to bring out the best in each person, and I recognize that, because people have different strengths and approaches, the best way to get people to deliver is by encouraging them to be themselves at work.

“I also try to be external in my focus, so I spend time at the stores and distribution centers talking to people, which can give you more information than a formal focus group, because it's more direct.”

Tonia Elrod, associate director of external relations for P&G's oral care division, told SN Dietz was “a very inspiring leader who sets a clear vision and direction for the organization.

“In addition, she's very creative and willing to act quickly on new information — while keeping everyone moving forward — with new, unique ideas and the right timing,” she said. “She's also able to make tough choices on hard calls while keeping her team motivated.”

Asked whether being a woman has made it tougher for her to advance in business, Dietz said she does not think so.

“I judge people based on the content of their character and what they can deliver, not on their age, gender or ethnicity, so I never felt it was a detriment to be a woman. In fact, being a woman may make it easier to market to the bulk of shoppers, who are women.

“I've also found diversity on a management team helps contribute to being a winning team, because different ways of thinking can lead to better bottom-line results.”

In her spare time, Dietz said, she watches a lot of football with her husband, and they also enjoy traveling together.

“I've traveled many places in the world for P&G, and some of the things I've seen in China, Japan and Istanbul, Turkey, have been very eye-opening,” she said. “That's given me a desire to learn more about different cultures.”