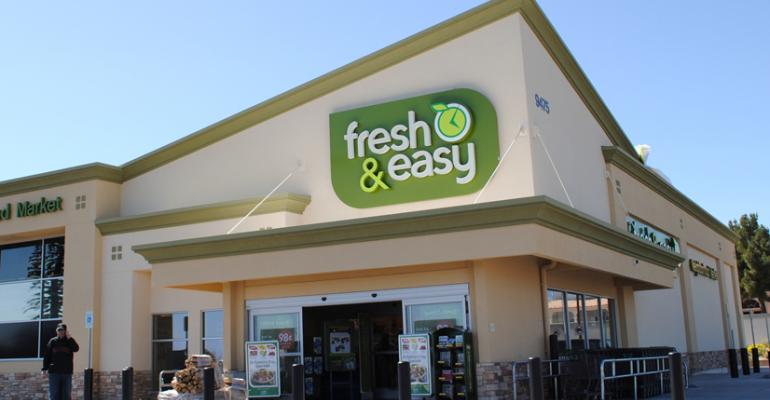 LONDON — Tesco’s planned exit from the U.S. — where it has operated Fresh & Easy Neighborhood Market locations since late 2007 — may be difficult and complex, industry observers pointed out.

“Leaving the U.S. is the right thing to do,” Philip Clarke, Tesco’s chief executive officer, said in confirming his company’s plans.

According to Laurie McIlwee, chief financial officer, “What we’re most interested in is buyers that are interested in buying the complete business,” adding that “a clean sale would remove redundancy and lease issues.”

Tesco said it has received “a lot of interest” in Fresh & Easy— for the whole business and for groups of stores — though it is unlikely to conclude disposing of them for at least three more months, it said.

Observers said disposing of the 200 operating stores, plus other sites that have not yet opened, may not be an easy proposition.

“I don’t know that there will be a single buyer for the company, but there will be buyers for individual stores, I would imagine,” Neil Stern, senior partner at McMillanDoolittle, Chicago, told SN.

“There just isn’t anyone who is used to running stores of 10,000 square feet to 12,000 square feet — that doesn’t fit the profile comfortably of any company that’s operating right now. The issue for Tesco has always been, what is Fresh & Easy? If they were trying to be Trader Joe’s, the sites are not all optimal to be Trader Joe’s, and if they were trying to be like Aldi, not all the site locations are optimal for Aldi.

“Tesco never really defined what it wanted to be, and as a result the real estate strategy is all over the map.

“When Tesco started out, the goal was to operate 2,000 stores in five years, so it was going to have stores in all kinds of markets. The problem is, if you are going to build 2,000 stores, you need to get the first 50 right, and Tesco never got there. That’s been what’s plaguing it.”

One industry source said the select locations have been on the market for several months. “I know for a fact that eight or nine months ago, a marketing package was circulating,” the source told SN.

“But the consensus was that nobody would buy the entire operation as a going concern. As far as real estate value, not every site was an A-plus, so nobody was expected to acquire the portfolio.

“That left Tesco with only one solution — to dispose of the stores on a case-by-case basis. I suspect that would be a very slow process, particularly since the company laid off its entire real estate staff months ago.”

The company has also reportedly been selling refrigeration equipment from stores that were closed or sites that never opened. However, the refrigeration and the air conditioning are one integrated unit, “so if someone is interested in a particular property and they don’t need to keep goods cold, the entire refrigeration and HVAC system is worthless to them,” the source said.

Andrew Wolf, managing director for BB&T Capital Markets, Richmond, Va., estimated that Fresh & Easy generates $5.5 million in sales per unit. “So if it were to sell most of the stores to Aldi, which generates $8 million per store, that would be negative for operators in the region.

Alternatively, if it were to sell mainly to a dollar-store chain, that would be positive for operators since typical dollar stores produce about $1.2 million per unit in sales of consumables.”

In reporting results for the fiscal year that ended Feb. 23, Tesco said it was treating Fresh & Easy as a discontinued operation and taking a write-down of approximately $1.5 billion for the 200 stores it operates in California, Arizona and Nevada.

The company said late last year it would conduct a strategic review of its U.S. operation, and the decision to exit was anticipated by most industry observers.