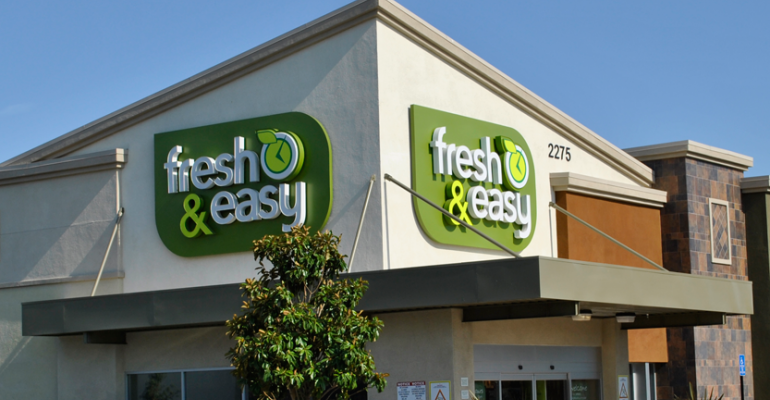 The company said it has hired Greenhill & Co., a British investment banking firm, to conduct a strategic review of the U.S. operation, with results of that review scheduled to be discussed at Tesco’s annual meeting in April.

However, while Philip Clarke, Tesco’s chief executive officer, said the company is considering “all options for the business, it’s likely the review will lead to Tesco exiting the U.S. market,” he added.

He said Tesco has had “a number of approaches in recent months from parties interested in acquiring all or part of Fresh & Easy or in partnering to develop the business.”

Industry observers have speculated Wal-Mart Stores or Aldi might be potential buyers for some Fresh & Easy stores, and drug chains might also be interested. It might be more difficult for Tesco to dispose of its 1-million-square-foot distribution center or its commissary in Southern California, observers pointed out.

Tim Mason, CEO of Fresh & Easy and group deputy CEO of the parent company — who was instrumental in designing the Fresh & Easy format — left Tesco effective last Wednesday after a 30-year career. Asked by reporters in London if Mason had been pushed out, Clarke declined comment but said, “We felt it was the right time for Tim to leave.”

“He leaves with my thanks and best wishes,” Clarke said separately in a formal statement.

Fresh & Easy is being run by Tim Ashdown, chief retail officer, who joined the U.S. division in May after three decades with Tesco’s U.K., South Korea and China operations.

Fresh & Easy operates 200 stores in California, Arizona and Nevada, with sales estimated at about $1.2 billion. However, the chain has continued to lose money — $245 million (U.S.) for the year ended in February 2012 and $119 million through the first half of the current fiscal year.

The announcement of the strategic review and Mason’s departure came on the heels of Tesco’s release of financial results for the third quarter ended Nov. 24, which showed comparable-store sales at Fresh & Easy up 1.8%, compared with a 6.9% increase in the second quarter.

“Following a year in which my priority for Fresh & Easy was to improve its performance, I have now made a fully informed assessment of its longer-term potential,” Clarke said. “While the business has many positives, its journey to scale and acceptable returns will take too long relative to other opportunities.”

Tesco’s decision to launch the strategic review helped boost the company’s stock by 3% the day of the announcement.

According to one observer quoted in the Financial Times of London, “For a business that accounted for just 1% of Tesco’s sales in the first half of the year, it attracted a disproportionate amount of attention.”

One observer said Clarke “should have wrung Fresh & Easy’s neck long ago.”

A spokesman for Fresh & Easy, El Segundo, Calif., told SN last week, “Our focus remains on our people and our customers. It is business as usual in our stores, and we look forward to bringing our neighbors the same delicious, wholesome and affordable food they have come to expect from Fresh & Easy.”

When Tesco initially announced plans in 2006 to enter the U.S. market the following year, “the global economy was flying, and not even the brightest economists in the world could foresee the unprecedented crisis about to engulf the world,” Clarke said in comments on the chain’s website.

“But when it hit, it hit hard, and those states in the U.S. where we were trying to build a presence — California, Nevada and Arizona — were particularly affected by the sub-prime crisis.”

The United Food and Commercial Workers Union, which has sought to organize Fresh & Easy workers since 2007, issued a statement last week in which it said Tesco’s decision “forces thousands of Fresh & Easy workers to face a holiday season filled with uncertainty and fear if their jobs and stores will still be there in the new year.”

Tesco entered the U.S. with what it felt was a unique format — stores of 10,000 square feet with only about 3,500 SKUs, including a wide assortment of fresh items designed to appeal to the demand among West Coast consumers.

The stores never managed to meet Tesco’s expectations, however, with sales per square foot per week of $10.86 in February 2012, according to one industry analyst — only slightly more than half Tesco’s original goal of $20.

• An intense pricing approach, which it altered to put more emphasis on the fresh and wholesome attributes of the product offering.

• A lack of in-store bakeries, which it subsequently added to about 30% of the stores.

• Too many health and beauty products, which subsequently had their numbers reduced.