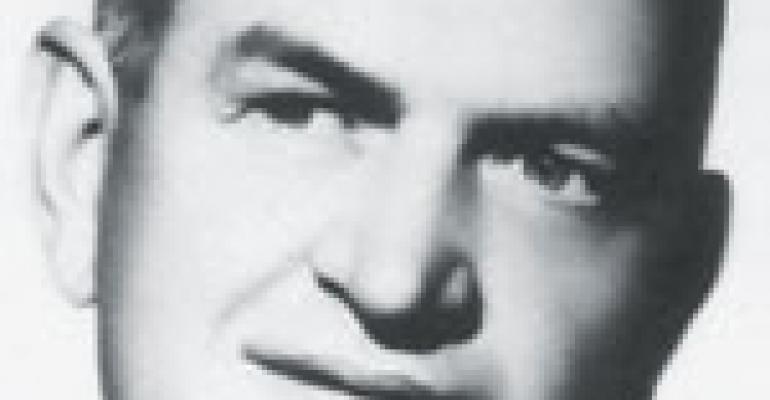 His detailed plan for making a profit by selling discount groceries in a self-service environment fell on deaf ears at Kroger Co., but it wasn't long before the whole world wanted to hear what Michael J. Cullen had to say about the supermarket business. His 1930 store in New York City set the stage for what was to become an enduring business model, through good times and bad. Michael J. Cullen was

Michael J. Cullen was a man ahead of his time — a man who saw the future's possibilities and made them reality.

Cullen was the founder of King Kullen Grocery Co., which the Smithsonian Institution has designated as the first modern American supermarket. The store, which opened in August 1930 in the New York City borough of Queens, is recognized for being the first to combine self-service, separate departments, discount pricing and volume dealing all under one roof.

Although each element had its place in the grocery stores of the 1920s, it was Cullen who had the vision to put them in one package.

In laying out his vision, Cullen spoke in biblical terms when he said, “I would lead the public out of the high-priced houses of bondage into the low prices of the house of the promised land.” And because of his vision and leadership in the early days of the supermarket industry, Cullen has been named to SN's Hall of Fame class of 2009.

In comments to SN, Thomas K. Cullen, vice president of King Kullen, Bethpage, N.Y. — the grandson of the chain's founder — said, “In the King Kullen family, Michael Cullen is a real hero who is held in high esteem for his role as an American innovator and also for his many works of charity.

“He was a generous man who, throughout the Depression, gave of himself to the less fortunate and provided hundreds of men and women with employment.

“We also admire him for the tone he set within King Kullen — that workers are to be treated with respect and dignity and that the customer is always the first priority. Nearly 80 years after Michael Cullen opened his first supermarket, we continue to live by the example he set.”

Cullen was born in 1884 in Newark, N.J., and joined A&P as a clerk in 1902. He spent 17 years with A&P, rising to division superintendent before moving to the Midwest to work — first for Mutual Grocery Co. in Illinois, then for Bracey-Swift in Missouri and finally for the Herrin, Ill., branch of Kroger Grocery & Baking Co.

Cullen's wife Nan recalled years later that her husband was interested in the concept of a supermarket as early as 1913, the year they got married, “but no one would listen to him.”

In 1929, Cullen wrote a letter to William Albers, Kroger's chief executive officer, pointing out the efficacy of the cash-and-carry system that had already been demonstrated by Henry Krohl in New Jersey and proposing that Kroger open up five test stores, to be called Cullen Stores, anywhere in the U.S.

What Cullen envisioned was a better way to operate a grocery store — one where low prices and self-service would draw customers who could leisurely shop for all their needs in a single large, roomy facility.

“I would convince the public that I would be able to save them from $1 to $3 on their food bills,” Cullen wrote. “I would be the ‘miracle man’ of the grocery business. The public would not and could not believe their eyes.

“Weekdays would be Saturdays, rainy days would be sunny days, and then when the great crowd of American people came to buy all those low-priced and 5% items, I would have them surrounded with 15%, 20% and in some cases 25% items. In other words, I could afford to sell a can of milk at cost if I could sell a can of peas and make 2 cents, and so on all through the grocery line.

“When I come out with a two-page ad and advertise 300 items at cost and 200 items at practically cost, the public would break my front doors down to get in.

“Don't let the buying worry you in any way whatever. I could buy goods [and] ship them direct to my stores 3% cheaper than you could buy them, store them in a warehouse and put them through the red tape that all Kroger items go through before they are sold.”

To stress his belief in his approach, Cullen offered to invest $15,000 of his own money “to prove this will be the biggest money-maker you have ever interested yourself in.”

At the end of the letter he wrote, “Before you throw this letter in the wastebasket, read it again and then wire me to come to Cincinnati, so I can tell you more about this plan and what it will do for you and your company.”

Albers never responded to Cullen's letter — it turned out years later that a subordinate had not passed the letter on to him — so Cullen left Kroger and moved to New York, where he formed a partnership with Harry Socoloff, vice president of Sweet Life Foods Corp. in Brooklyn, to open the first King Kullen on Aug. 4, 1930, in a vacant garage he leased in the Jamaica section of Queens.

Why King Kullen and not Cullen? In 1937, Nan Cullen told a newspaper reporter:

“Our son Bobby, who has a great gift for drawing, was sitting by his table very eagerly engrossed in some sort of a drawing. His father asked him what he was drawing, and Bobby showed him. … It was a picture of a globe, and on top of it was a man seated — Bobby's idea of a man seated on top of the world. And across the bottom he had printed the title, ‘King Kullen.’

“Actually, it was because Bobby thought ‘Cullen’ was spelled with a K. But the title struck Mike at once.”

Cullen promoted his initial store with a barrage of newspaper ads and door-to-door circulars that listed columns of brand names and low prices under the heading, “King Kullen — The World's Greatest Price Wrecker.”

According to the company, the store was an immediate hit, drawing customers from 75 and 100 miles away.

Cullen's store caused a sensation across the grocery industry.

Writing in 1955, Max M. Zimmerman, founder of Super Market Institute, the predecessor to Food Marketing Institute, said: “Chain-store executives, [who] had devoted many years to reducing their pattern of cash-and-carry stores almost to a science, could not understand how the super[market] — particularly the barren structures located in the outlying community areas, with price as their only appeal — should receive such consumer acceptance.

“To [them] … this crude operation was the very antithesis of their scientific retailing, which had prevailed for over two decades. [They] found it hard to believe … people would drive 25 miles or more to shop for foods and sacrifice the personal service chains had perfected.”

Interviewed in 2004 by SN, Ben Schwartz, retired owner of the onetime Foods Co. chain in Southern California, talked about the attraction of Cullen's concept.

Allen I. Bildner, retired chairman of Kings Super Markets, Parsippany, N.J. — whose family got into discount supermarketing shortly after Cullen — gave SN a copy of a college thesis he wrote in 1947 that said it was quite natural to use price as a customer draw during the Depression.

“Items were put on sale at figures far below existing competition and ballyhooed to the utmost in full-page ads. The Price Wreckers [like Cullen] … drew the public to the outlying sections of the cities in numbers that seemed impossible. The size of the purchases rose because items on sale were sold in groups of three or four at a stated price. So many offers were outright bargains … that the shopper reasoned all items must be bargains.”

According to Bildner, Cullen and others realized that they could stabilize rent and payroll below the chain average of the time by renting concessions to other operators, which reduced the grocery department overhead to zero or made an actual profit; and by moving to self-service, which reduced payroll expenses by 30% to 50% below that of chain stores.”

Cullen began opening additional stores in the New York metropolitan area that continued to draw large crowds. According to one newspaper article in the early 1930s, “So great was the crowd [at one store] on a Saturday throughout the entire day, police reserves were called upon to keep the eager shoppers in line.”

In his 1955 book on the history of the industry, Zimmerman quoted remarks by John Hartford, president of A&P in the early 1930s, who talked about the impact of King Kullen on one of his stores.

“We did not take [supermarkets] very seriously at first, but the competition was pretty aggressive. We had a competitor [in Brooklyn] by the name of King Kullen. We had a very profitable operation in Brooklyn. In a very short space of time, they forced the Brooklyn unit into deep red figures.

“I was very much concerned because we had a conflict at headquarters whether we should adopt that kind of operation. … I realized if it could happen there, it could happen in any unit we had. We finally tried out a store to see whether we could run this type of operation without selling under cost. It was confirmed we could, and we went in very aggressively to supermarket operations.”

In a 1933 newspaper interview, Cullen revealed his aspirations in the midst of the Depression:

“These are tough times, and I am on the level when I say I will do more than any other man in this country to save the American people money. I am making it possible for hundreds of thousands of people to get all they want to eat. I am just going to paddle my own canoe and give people a break.”

By 1936, there were 17 King Kullen locations, most of them in converted garages, in New York City and Long Island, generating sales of $6 million a year — equivalent to more than $75 million in 2009 dollars.

Cullen was planning to expand to new markets when he died of peritonitis following an appendectomy at age 52. According to Zimmerman, some of Cullen's associates at the time felt he worked himself to death.