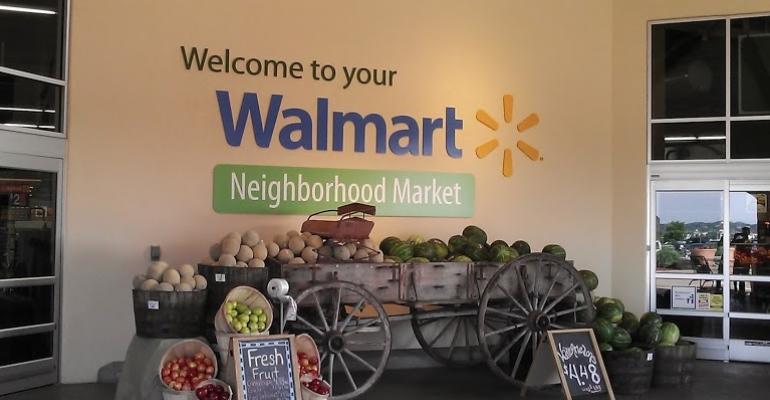 <p> Wal-Mart plans this year and next to open 80-100 Neighborhood Markets like this one in Rogers, Ark.</p>
News>Retail & Financial

Simon said the company had plans to open between 80 and 100 Neighborhood Market stores this year and next, with the potential to increase that number as returns on newly built stores approach those of its Supercenter format. While declining to cite a specific sales figure, he said the chain was “comping as well as any grocery chain in U.S.,” citing a hybrid format that competes effectively with drug, conventional grocery, and dollar stores.

“Neighborhood Market is a really cool format” he said. “It’s a grocery store combined with a drug store put in a place where a dollar store would be. It has performed really well from a convenience standpoint.

One place Neighborhood Market won’t be arriving soon is New York City. Simon said Wal-Mart after several years of unsuccessfully trying to crack the five boroughs was instead focusing its development efforts on increasing share in existing markets.

“Our strategy has now shifted a bit. It's easier and faster and more profitable for us to take a market where we have a 10% share and turn it into a 15% share than it is for trying to move a 1% share to a 2% or 3% share. We’re focusing on opportunities where we see our brand is already well-accepted by the customer and the community — places that ask for us. We’re putting stores there.”