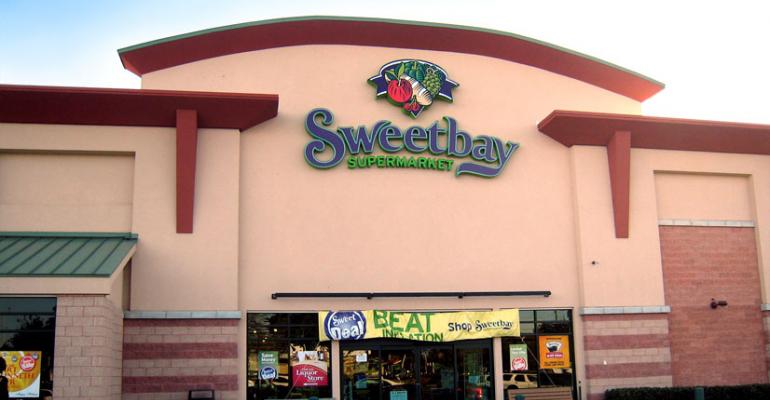 New Owners in the Sweetbay Saga

JACKSONVILLE, Fla. — Bi-Lo Holdings here last week said it has agreed to acquire the Sweetbay, Reid’s and Harveys banners from Delhaize America for $265 million in cash.

The deal unites Sweetbay with Winn-Dixie — two Florida-based supermarket chains that have long struggled to stand up to market-leading Publix Super Markets — while the largely rural Harveys and Reid’s stores will strengthen Bi-Lo in South Carolina, Georgia and Northern Florida. The deal also includes leases for 10 Sweetbay stores that were closed by Delhaize earlier this year, but does not include Sweetbay’s Plant City, Fla., warehouse.

Delhaize said the sale would simplify its U.S. strategy and provide additional financing for ongoing investments at its Food Lion stores. A Delhaize spokeswoman told SN last week that no other U.S. banners were currently for sale. The 72-store Sweetbay chain is operated by Delhaize’s New England-based Hannaford Bros. division, while Reid’s (11 stores in South Carolina) and Harveys (72 stores in South Carolina, Georgia and Florida) are divisions of Food Lion.

The sale is expected to close in the fourth quarter of 2013.

A spokesman for Bi-Lo told SN last week that the company would await regulatory approval before sharing its intentions on whether to keep or retire the Sweetbay banner, which Delhaize introduced at former Kash n’ Karry stores nearly a decade ago. It was also unclear how many stores, if any, might replace existing Winn-Dixie or Bi-Lo locations. Local sources said Sweetbay generally has good locations along Florida’s Gulf Coast.

Much of how the combined companies will look may depend on federal regulators, although at least one observer said he felt the impact could be minimal, citing a wider range of retailers selling food than in the recent past. A Winn-Dixie/Sweetbay combination “might be challenging,” Burt P. Flickinger III, managing director of Strategic Resource Group, told SN, “but it should be doable.”

Randall Onstead, president and chief executive officer of Bi-Lo Holdings, in a statement said the transaction “will allow us to build on the strength of our Bi-Lo and Winn-Dixie stores and allow us to extend our great products at great value to a broader customer base. Sweetbay, Harveys and Reid’s are well-recognized and trusted businesses that share our passion for exceptional service.”

Winn-Dixie last month said it would outsource its distribution to C&S Wholesale Grocers, the Keane, N.H.-based distributor that is acquiring Winn-Dixie’s distribution centers and transportation businesses by the end of the year.

Sweetbay grew out of the former Kash n’ Karry banner that Food Lion acquired for $341 million in 1996, shortly after Kash n’ Karry emerged from Chapter 11. In 2004, it began restyling the chain behind a quality and service offering under the Sweetbay name. The chain, which borrowed much of its approach from its Maine-based sister chain Hannaford Bros., won raves for improved looks at its stores but had trouble making a consistent impression, at times struggling with volumes and price perception. Delhaize closed 33 Sweetbay locations earlier this year, saying they were a drain on profits.

“It’s not a bad store but to me one of their classic problems has been that you can’t immediately identify who their customer is,” John Crossman, president of Orlando, Fla.-based real estate developer Crossman & Co., told SN last week. “When you think of Target, or Publix, or Wawa, you can immediately picture who their customer is. But when you say Sweetbay, it’s more like, ‘Who is their customer?’ That’s always been challenging.”

Flickinger said he felt Delhaize — now in the midst of an extensive revamping of Food Lion and under pressure to slash costs as profits erode — could no longer afford to await payback on businesses facing questions about long-term viability.

“With [Delhaize chief executive officer] Pierre-Olivier Beckers stepping aside and letting new leadership come in, some of the retail risks he took corporately they want to unwind,” Flickinger said. “With Harveys and Sweetbay, they were never able to get size and scale they hoped for.

Sweetbay, Flickinger said, faced “too high a degree of difficulty with Food Lion on one side and Wal-Mart on the other side, not to mention BJ’s and Costco and Target.”

Patrick Roquas, an analyst following Delhaize for Rabobank, Amsterdam, told SN he supported the divestiture. “Sweetbay has been struggling for many years, even after a major rebranding effort some years ago, and the market has doubted its future given the dominance of Publix in the region,” he said. “Delhaize can focus time and money on the remaining assets that are in need of further price and store investments.”

Roquas said he estimated the 165 stores in the deal generated “a very small profit last year,” and said Bi-Lo would likely take a small loss after closing, given capital and lease obligations at the acquired properties.