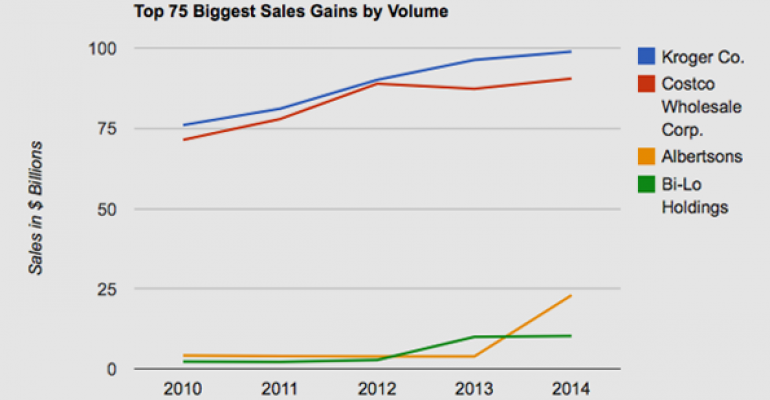 Winners and losers in five years of Top 75

In big picture terms, in the last five years business has been booming at the retailers and wholesalers on SN’s Top 75. Total combined sales of all 75 companies on the list topped $1.18 trillion in 2014, up from $891.1 billion in 2010.

Some retailers have fared particularly well.

As in most aspects of the list, Walmart is in a league all by itself. The company’s outsize sales — hundreds of billions more than No. 2 Kroger Co. — also grew the most by volume of any other retailer since 2010. Sales climbed $112 billion, as the retail behemoth continued to gain market share.

The next biggest sales gainers were Kroger and perennial Top 75 No. 3 Costco Wholesale Corp., increasing volume by $22.9 billion and $19.1 billion, respectively, from 2010 to 2014. Kroger has managed to accomplish these impressive sales gains while shedding 107 stores, although that only represents a 3% drop in the number of stores coupled with a 23% rise in sales.

While Albertsons and Bi-Lo Holdings also experienced big gains ($18.8 billion and $8 billion, respectively), this can mainly be attributed to the former’s acquisition of Albertsons stores from Supervalu and the latter’s purchase of Winn-Dixie.

When looking at the greatest sales gains by percentage, Albertsons and Bi-Lo also appear near the top of the list. Albertsons' sales grew 82% from 2010 to 2014, while Bi-Lo’s jumped 78%.

However, perhaps the more interesting story is the explosive growth of fresh- and ethnic-focused formats.

Since SN started tracking Sprouts Farmers Market as part of the Top 50 Small Chains & Independents in 2011, the retailer’s sales have skyrocketed 336%, from $550 million to $2.4 billion. In fairness, a lot of this growth is also a result of M&A activity (including mergers with Henry’s Foods in 2011 and Sunflower Farmers Market in 2012) but at the same time Sprouts has continued opening new stores to keep up with demand for its fresh-focused model.

Bodega Latina, a division of Mexico-based Grupo Commercial Chedraui, and Superior Grocers, a discount chain that targets Hispanics and other minority groups, followed a similar trajectory. Both joined the Top 50 in 2011. Since that time sales at Bodega Latina have climbed 60%, and those at Superior Grocers have increased 45%.

Of course, it hasn’t been all sunny skies for Top 75 companies.

Though not as severe a plunge, troubled A&P lost 54% of its sales, or $3.2 billion, in the same time period as it shed 130 stores. The ouster of president and CEO Sam Martin is just the latest symbol of A&P’s misfortunes.

Safeway’s sales were on the rise for much of the past five years, but the company has recently ditched stores to focus on its core business, selling off its Safeway Canada locations and shuttering the Dominick’s brand last year. So far Safeway’s attempts to get lean have led to a loss of 324 stores — a decline of 23% — since 2010 with a net sales loss of $3.5 billion, or close to 10%.

Maybe one reason traditional supermarkets are competing more with convenience and dollar stores is the sheer number of competitors.

Dollar General, Family Dollar Stores and 7-Eleven, which all started out with significantly more stores than other retailers in 2010, also gained the most stores by 2014.