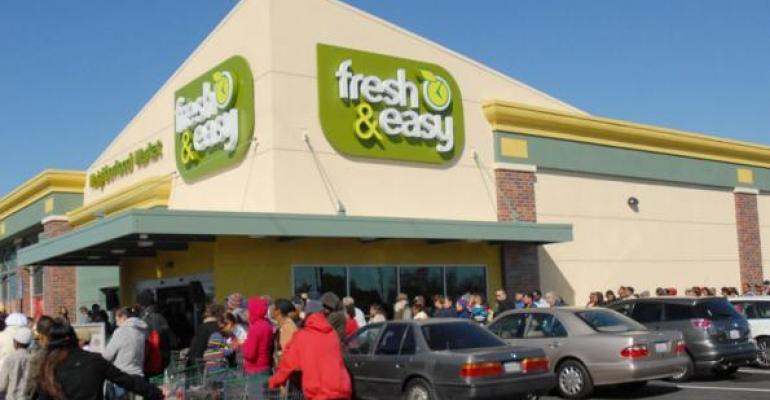 LOS ANGELES — Tesco said last week it has agreed to pay out approximately $190 million to exit the U.S. as part of its agreement to sell most of its Fresh & Easy Neighborhood Market stores to Yucaipa Cos. here.

Tesco said it will sell approximately 150 of its 200 stores in California, Arizona and Nevada, along with its distribution and production facilities in Riverside, Calif., to YFE Holdings, the company Yucaipa established to do the deal.

The Fresh & Easy locations Yucaipa is not buying will be closed over the next couple of weeks, a chain spokesman said.

Yucaipa expects to name a management team this week to run the stores, company officials told SN — with most industry sources expecting Yucaipa to name Jim Keyes, the former chairman and chief executive officer of 7-Eleven, to oversee the operation.

However, despite persistent industry speculation, it appeared doubtful last week that Yucaipa plans to re-banner the stores using the Wild Oats name. Yucaipa, which had acquired an 18% stake in Wild Oats in 2005, sold the company to Whole Foods in 2007, though the Wild Oats name itself was reportedly acquired by a partnership that included Keyes.

Yucaipa sources declined to comment last week on whether Keyes would be part of management or if it would use the Wild Oats banner.

SN Poll: What Should Yupaica Do With Fresh & Easy?

The 150 or so Fresh & Easy locations Yucaipa is buying are located in California, Arizona and Nevada. Yucaipa said it will also retain the 4,000 employees at those stores.

Tesco said it will close the remaining stores, including locations across the chain’s three-state operating area, although it will continue to seek buyers for those locations. A Fresh & Easy spokesman told SN the company plans to close all its stores in Sacramento, though the stores in the Bay Area are among those being sold to YFE, he added.

The transaction is expected to close within three months. Tesco began opening the small-format Fresh & Easy stores in mid-2007.

Los Angeles-based Yucaipa is the principal investor in A&P and Pathmark.

Ron Burkle, Yucaipa’s managing general partner, was the architect in the 1990s of a series of acquisitions of major Western chains — including Ralphs, Fred Meyer, QFC, Smitty’s and Smith’s Food & Drug — that were ultimately sold in 1999 to Kroger Co.

In announcing the purchase agreement early last week, Burkle said he anticipates making “some changes” in the stores to make them more relevant to consumers.

According to Burkle, Fresh & Easy offers “a tremendous foundation” from which to grow.

“We plan on continuing to build Fresh & Easy into a ‘next-generation convenience retail experience,’ providing busy consumers with more local and healthy access for their daily needs.”

Under terms of the agreement, Tesco said it will loan Yucaipa approximately $126.5 million, , and will receive warrants that could be exchanged for equity up to a maximum of a 32.5% stake in YFE.