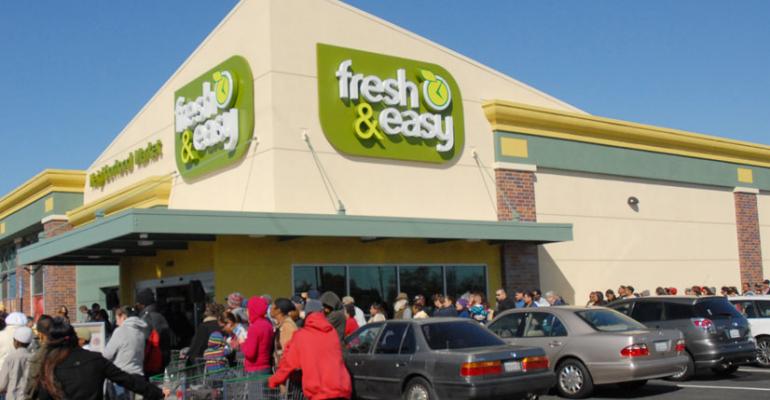 EL SEGUNDO, Calif. — A rash of promotional activity by Fresh & Easy Neighborhood Market since parent company Tesco announced in April it is seeking a buyer for the chain is being viewed as an effort to enhance the company’s efforts to sell the banner, industry observers told SN last week.

Tesco said in April it hoped to sell the store as a single unit, though there is a growing belief it may have to simply close the stores or settle on selling them to multiple buyers.

Fresh & Easy’s activity since the sale plans were announced has included a radio campaign that also encompasses some television, launched the day Tesco announced its decision; a summer program to send food trucks to stores in California, Arizona and Nevada to promote Fresh & Easy private-label products; and the introduction of 45 new private-label lunch items and frozen entrees in May.

Fresh & Easy said the activity is all aimed at serving customers better.

“We continue to work hard to bring our customers a great shopping experience,” Brendan Wonnacott, the chain’s spokesman, told SN. “Everything we have done this year is a reflection of our dedication to customers.”

He said the company plans to introduce additional private-label entrees this week.

“Its goal is to sell the stores to a single buyer, but because it was buying stores at the top of the commercial real estate market, it has A, B and C properties, so the thinking is, if it can demonstrate its productivity and high sales per square foot across its entire portfolio of stores, then maybe it can attract interest from enough buyers to sell off all the stores.”

David Gray, an analyst with Planet Retail, London, said the reason for the activity is “that Fresh & Easy is still incurring losses while trying to sell, and it can’t just give up and let [the stores] die as those losses would balloon.

“Secondly, the cleanest exit for Tesco would be to sell Fresh & Easy as a going concern and a complete business — something the company said in April was a realistic prospect, given the preliminary offers it had — so the better it is trading, the greater the likelihood of selling as a complete business and for a better price.”

A U.S observer linked the activity to Tesco’s desire to sell the stores to a single buyer. “Looking at what Fresh & Easy is doing, the only thing that makes sense is it hopes to sell the brand to someone who will acquire the stores and the name, or else why sink money into it?” he asked.

“On the one hand management is continuing to try to make it a successful operation, while on the other hand Tesco is trying to sell it.

“For those within the Fresh & Easy organization, it’s important to go to work and try to do all they can to succeed. Aside from having capital spending cut off months ago, the people at Fresh & Easy are trying to figure out how to keep the business going and make it successful.

“While the question remains as to whether it will continue under a different owner or banner or management, the goal is to demonstrate there is a valuable business model there.

“When other businesses collapse, there are people who say, ‘If we had only had six more months or if we had only tried this or that.’ So Fresh & Easy is still trying to get consumers to understand the quality of its private label through the food trucks and raising awareness through the radio campaign.”

Flickinger said he sees the wisdom of Fresh & Easy’s efforts. “If Fresh & Easy can get sales up one more time, as it did in 2011, that would make it a lot more attractive to a financial buyer, who could expect a reasonable profit level with higher sales and justify buying the chain and operating it under one banner.”

He said he expects the 200 Fresh & Easy stores to be sold to some combination of hard discounters like Aldi, Grocery Outlet or Canned Food Warehouse; natural food operators like Sprouts Farmers Market or Natural Grocers by Vitamin Cottage; or independent Hispanic and Asian operators “who see the properties can be productive and achieve a higher level of sales per square foot.”

Industry observers said Tesco has been in talks with Yucaipa Co., the Los Angeles-based investment firm, which reportedly is interested in moving into some Fresh & Easy locations and turning them into a new version of Wild Oats.

The sticking point in those talks, industry sources told SN, has been Tesco’s desire to avoid retaining any liabilities for the U.S. stores.

According to one observer, “When I heard Yucaipa was talking to Tesco, I knew it meant there were no other bidders because Yucaipa would not want to get stuck with all of Fresh & Easy’s long-term leases when it already has so much debt with Pathmark and A&P.

“With so many bad locations, no one is likely to want to take on those leases. Certainly Tesco could find other tenants for the stores and become a big landlord, but it wants to get out altogether, all at once.”

When Tesco reported its financial results in April for the fiscal year ended Feb. 23, it said it was treating Fresh & Easy as a discontinued operation and taking a write-down of approximately $1.5 billion (U.S.). The loss in the U.S. totaled $1.8 billion for the fiscal year ended last February, compared with a loss of $533.6 million a year earlier.