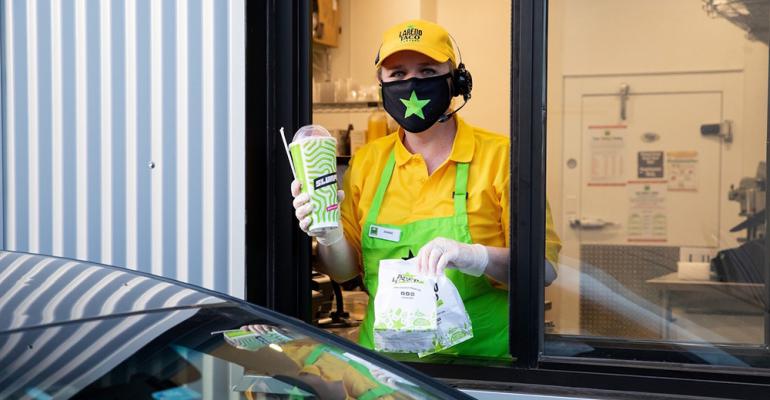 The Irving, Texas-based convenience-store chain first introduced Laredo Taco and the Evolution concept in March 2019 at a lab store in Dallas and has since opened two more in Dallas and three elsewhere in the United States. The drive-thru is in a corporate-owned store.

"7-Eleven is known as a beverage destination, and Laredo Taco Company makes some of the best quick-serve Mexican food anywhere,” said Chris Tanco, 7–Eleven’s executive vice president and chief operating officer, in a statement. “Throw in the convenience of grabbing a taco paired with a Slurpee drink through a drive-thru, and it's a match made in heaven."

The COVID-19 pandemic has also heightened the demand for contactless foodservice.

“While opening the first Laredo Taco Company drive-thru restaurant with a 7-Eleven store would be exciting any time, we think customers looking for socially distanced ways to grab breakfast, lunch and dinner will really appreciate it now,” Tanco said. "

Inside Laredo Taco Company, which shares space and a storefront with a more traditional 7-Eleven, diners can consume wine-based frozen margaritas, beer or wine on the premises. Margarita flavors include classic, strawberry, swirl, watermelon, sangria, melon and prickly pear.

Drive-thru customers can choose from more than 30 beverages and a menu that features beef barbacoa, chorizo, carne asada, carnitas and breakfast tacos.

Drive-thru hours are from 5 a.m. to 10 p.m., Sunday-Thursday, and 5 a.m. to 11 p.m. on Fridays and Saturdays, with an all-day menu and meals for "Los Niños" that include a side and a small drink. Breakfast is served from 5 a.m. to 10:30 a.m. and features a variety of breakfast tacos and breakfast bowls.

The company officials opened its first lab store just west of downtown Dallas on March 22, 2019. It prominently incorporated the Laredo Taco concept, for which it acquired the trademark rights in January 2018 when it completed the $3.3 billion purchase of 1,030 Sunoco and Stripes locations.

All the “Evolution Store” units include a restaurant. The company said that it plans to open additional concept stores this year in North Texas and Manassas, Va.

In addition to the new Laredo Taco Company drive-thru, the latest 7-Eleven “Evolution Store” offers an assortment of exclusive products, services and features customized to the neighborhood.

The company said the most popular features include self-serve specialty coffee and espresso drinks, on-tap novelty beverages, cookies and croissants baked fresh in-store, a wide selection of national brand skincare and cosmetics items, and The Wine Cellar and Beer Cave.

The new store is one of a growing number to offer mobile checkout and delivery. With the 7Rewards loyalty program, in-store customers can skip the checkout counter and pay for their purchases on their phone. The convenient feature is found in the 7-Eleven app.