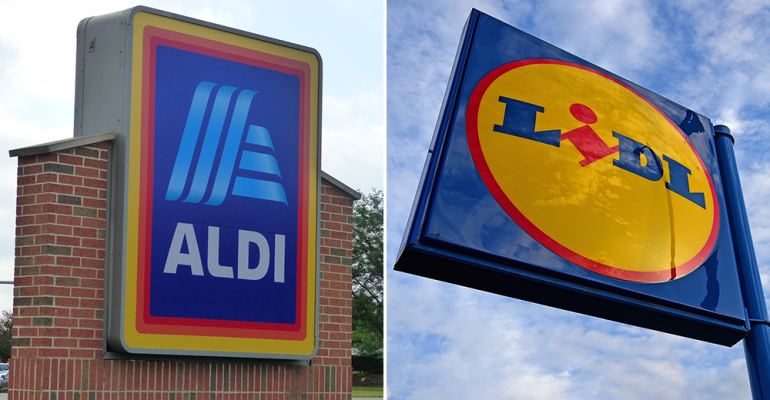 In the complaint, filed March 1 in U.S. District Court for the Eastern District of North Carolina, Aldi claims the ex-employees breached non-compete and non-disclosure agreements by accepting jobs at Lidl and then providing the company with proprietary, confidential trade information from Aldi.

Named as defendants in the suit are Bruna Maraccini, who most recently served as director of real estate for North Carolina and Virginia at Aldi; Colleen Savory, a real estate assistant for those regions at Aldi; and Arlington, Va.-based Lidl US.

In the document, Aldi describes Lidl as “Aldi’s direct competitor in the retail grocery industry.” Both retailers have parent companies based in Germany. Aldi’s U.S. headquarters is located in Batavia, Ill.

“At Aldi, we are dedicated to operating our business fairly and with integrity. Our business model and intellectual property are at the heart of our commitment to consistently offer customers high-quality products at the lowest prices, while at the same time creating rewarding careers for our devoted employees,” Aldi said in a statement on the lawsuit. “We welcome fair competition. However, where we believe anyone has taken measures to undercut our ability to compete fairly, we will take any and all necessary actions to stifle such attempts. As with most litigation, we will limit our comments to the judicial proceedings, as we believe that our complaint speaks for itself.”

A Lidl US spokesman said the company doesn’t comment on pending litigation.

Aldi alleges in the suit that 11-year employee Maraccini went to work for Lidl in violation of her non-compete agreement; took confidential, proprietary and/or trade secret information from Aldi — including real estate strategy maps and planned store locations — that she had agreed to return upon leaving the company; and enlisted Savory to steal Aldi information for use by Lidl.

Savory, a five-year Aldi employee, is accused of misappropriating Aldi trade information by sending it to Maraccini in her role at Lidl for use in competing with Aldi in North Carolina, and then accepting a job offer from Lidl in which she could put that information to use.

Meanwhile, Aldi claims Lidl conceded that it hired Maraccini in violation of her non-compete agreement and had knowledge that she possessed confidential, proprietary Aldi trade information. Aldi said it had issued a cease-and-desist order to both Maraccini and Lidl after being alerted to the situation by a former Lidl US employee.

Aldi said in the complaint that it seeks a temporary restraining order and then a preliminary injunction against the defendants, as well as compensation, damages and the return of misappropriated data and property.

“If left unstopped, Maraccini and Savory will continue to use Aldi’s confidential information and trade secrets, thereby enabling Lidl to unfairly compete with Aldi in the highly competitive retail grocery industry,” Aldi stated in the document. “Aldi has and will suffer immediate and irreparable harm if Maraccini’s violation of her contractual obligations to Aldi and both Maraccini and Savory’s misappropriation of ALDI’s confidential information and trade secrets are not immediately enjoined.”

Competition has intensified in Aldi’s and Lidl’s current and prospective market areas as both companies look to drive rapid expansion.

Aldi is amid a five-year, $5 billion-plus expansion program that will remodel most of its locations by 2020 and grow the chain from more than 1,800 stores now to 2,200 by 2022. The chain, with locations in 35 states, also has launched a major product expansion that will broaden the selection of fresh food in stores by 40%.

Lidl has jumped back on the expansion path after launching its first U.S. stores in June 2017 and then shortly afterward downsizing its plans. The company initially planned to have 100 locations within a year but then scaled that back to about 50. Lidl has since reset its real estate strategy and grown to about 65 locations in Virginia, Georgia, North Carolina, South Carolina, Delaware, New Jersey and New York. The chain is held in high regard by U.S. shoppers and, in late 2018, greatly expanded its footprint in the lucrative metro New York area with the acquisition of 27 Best Market stores, located primarily Long Island.

“Aldi and Lidl, which are similar in terms of format, private label and pricing and the markets in which they operate (including without limitation, Virginia and North Carolina) are direct competitors,” Aldi stated in the document. “Like Aldi, Lidl is also a retail grocer that expanded from Germany into the U.S. Lidl has not been able to achieve its stated expansion plans of 100 stores within the first year, in part, because of its real estate strategy.”