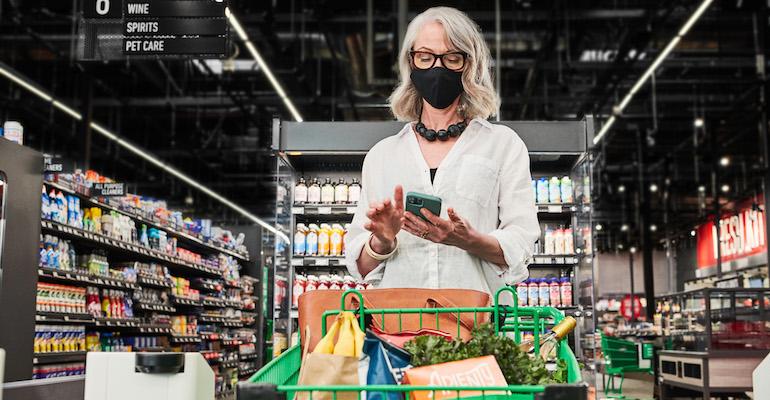 Amazon is serving up added savings to members of its Prime customer benefits program who shop at the company’s fast-growing Amazon Fresh supermarkets.

Beginning June 29, Prime members will get a 20% discount on selected everyday items at Amazon Fresh stores. Seattle-based Amazon noted that the in-store savings will be available year-round to Prime members, who receive the discount by scanning the code in the Amazon app at checkout or paying with a credit card registered to their Prime account.

“We’re excited to launch the new Prime member savings benefit at Amazon Fresh stores today, offering 20% off everyday essentials across aisles,” Jeff Helbling, vice president of Amazon Fresh, said in a statement. “Prime members get the best of shopping, savings and entertainment every day from Amazon, and we’re thrilled to add another benefit to their membership.”

In support of the new Prime savings benefit, Amazon also is offering members 20% off 10 selected items:

Although Amazon’s Just Walk Out cashierless technology — which enables customers to pay for their items without waiting at the checkout line — is key to Amazon Fresh’s appeal, the banner also touts good food and value for the money. Amazon Fresh stores serve up a curated assortment of competitively priced national, regional, local and Amazon own brands, geared toward a weekly trip. The stores also offer an ample selection of fresh produce, meat and seafood plus a range of prepared foods made in-store, including freshly baked bread, hot and cold bars, fresh sushi, made-to-order pizza and hot sandwiches.

The Prime member discount comes as Amazon Fresh has accelerated its expansion. Earlier this month, Amazon announced five new Amazon Fresh stores, four of which have opened. Those additions came after Amazon in May said it began hiring for the first Amazon Fresh locations in New York and New Jersey.

So far in June, Amazon Fresh stores have opened in Manassas and Lorton, Va.; North Riverside, Ill.; and Huntington Beach, Calif. Another location is slated to open in Arlington, Va., “in the coming weeks,” Amazon said.

The new locations, except for the Arlington site yet to open, expand the Amazon Fresh banner to 34 stores in six states and the District of Columbia. That’s more than twice the 14 locations Amazon Fresh had in mid-June 2021. Next in number of Amazon Fresh stores after California (15) and Illinois (eight) are Washington state (four locations); Virginia (three); and Maryland, Pennsylvania and D.C. at one apiece. All of the new stores also include Just Walk Out shopping.

In mid-May, Amazon unveiled plans for Amazon Fresh to enter the metropolitan New York market with upcoming stores in Paramus, N.J., and Oceanside, N.Y. The Oceanside store will mark Amazon Fresh’s debut in the metro New York suburban market of Long Island. According to Newsday, two more Long Island Amazon Fresh stores are upcoming in Plainview and East Setauket. Newsday also reported that Amazon is eyeing a 38,000-square-foot space in Glen Cove, where a King Kullen supermarket is slated to close in late July.