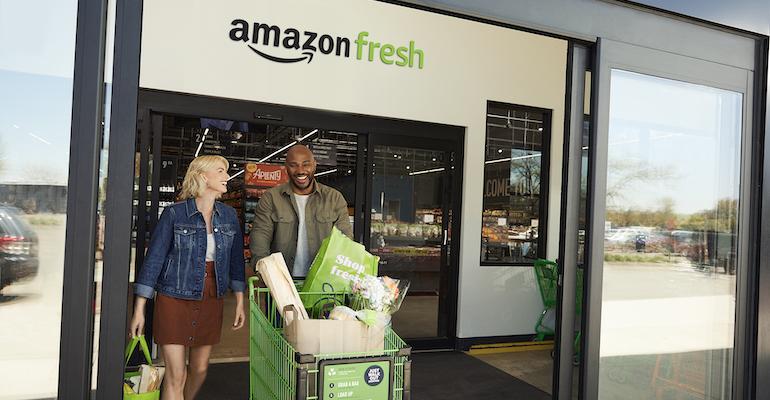 Amazon
New Amazon Fresh stores include three in northern Virginia and one apiece in Illinois and California. The banner also is readying to open its first New York and New Jersey stores.
News>Retail & Financial

Amazon has shifted into high gear with the expansion of its Amazon Fresh supermarket banner, more than doubling the number of stores a year ago.

This month, Amazon announced five new Amazon Fresh stores, three of which have opened. Those additions come after the e-tail giant last month said it has begun hiring for the first Amazon Fresh locations in New York and New Jersey.

Most recently, the company unveiled plans for three new Amazon Fresh stores in northern Virginia. A 45,000-square-foot store opened in Manassas on June 9, and a 38,000-square-foot location in Lorton is set to open its doors on June 23. Another Amazon Fresh is slated to open in Arlington “in the coming weeks,” Amazon said. The retailer didn’t give a size for the Arlington store but said all three of the new Virginia locations would offer its Just Walk Out cashierless technology, which enables customers to pay for their items without waiting at the checkout line. 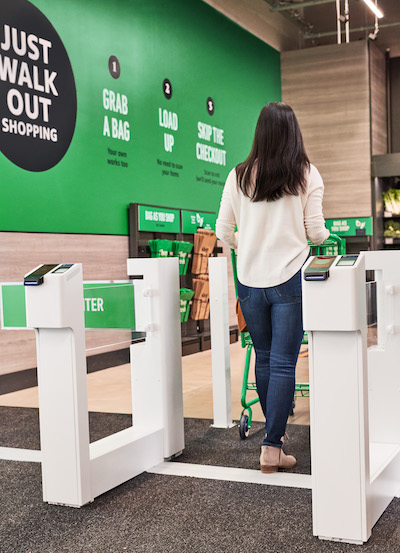 With the addition of new stores, 17 of Amazon Fresh's 33 locations now provide Just Walk Out technology, while the rest of the stores offer the Amazon Dash Cart "smart" shopping cart, which has similar functionality. (Photo courtesy of Amazon)

Also on June 9, Amazon launched a 40,000-square-foot Amazon Fresh in North Riverside, Ill., marking its eighth store in Illinois. The company opened its 15th California location under the banner — the state with the most Amazon Fresh outlets — on June 2, a 35,000-square-foot store in Huntington Beach. Both of those stores also offer Just Walk Out functionality.

The new locations, save for the Lorton and Arlington sites yet to open, expand the Amazon Fresh banner to 33 stores in six states and the District of Columbia. That’s more than twice the 14 locations Amazon Fresh had in mid-June 2021. Next after California and Illinois in number of Amazon Fresh stores are Washington state (four locations); Virginia (three); and Maryland, Pennsylvania and D.C. at one apiece.

“We continue to invest in and grow Amazon Fresh, building on our vision to expand our omnichannel offering, and also continue to innovate in the areas we know matter to customers — low prices, broad selection and convenience,” Helbling said.

In mid-May, Amazon unveiled plans for Amazon Fresh to enter the metropolitan New York market with upcoming stores in Paramus, N.J., and Oceanside, N.Y. The company didn’t specify the number of employees it aims to hire or provide opening dates and further details about the planned Oceanside and Paramus stores but said both locations will offer Just Walk Out service.

Besides being the first Amazon Fresh in the Empire State, the Oceanside store — which will take the space of a former Waldbaum’s supermarket — marks Amazon Fresh’s debut in the metro New York suburban market of Long Island. According to Newsday, two more Long Island Amazon Fresh stores are upcoming, in Plainview (a former Fairway Market store) and East Setauket (a former Waldbaum’s store). On Wednesday, Newsday also reported that Amazon is eyeing a 38,000-square-foot space in Glen Cove, where a King Kullen supermarket slated to close in late July.

The Amazon Fresh in Paramus, N.J., also will occupy a former Fairway Market site. In March 2020, Amazon acquired leases for Fairway’s Paramus and Woodland Park, N.J., stores via auction as part of the latter chain’s bankruptcy.

Amazon Fresh’s latest openings also now give Just Walk Out technology — which detects items taken off or removed from shelves while keeping a running total of the purchase — the edge over the multifunction Amazon Dash Cart smart shopping cart, which allows users to find items, track purchases and skip the checkout line. Currently, 17 Amazon Fresh stores offer Just Walk Out versus 16 locations providing the Dash Cart. The first Amazon Fresh to get Just Walk Out functionality was a 25,000-square-foot location in Bellevue, Wash., that opened last June. At the time, Amazon noted that the opening marked the debut of Just Walk Out capability in a full-size grocery store.