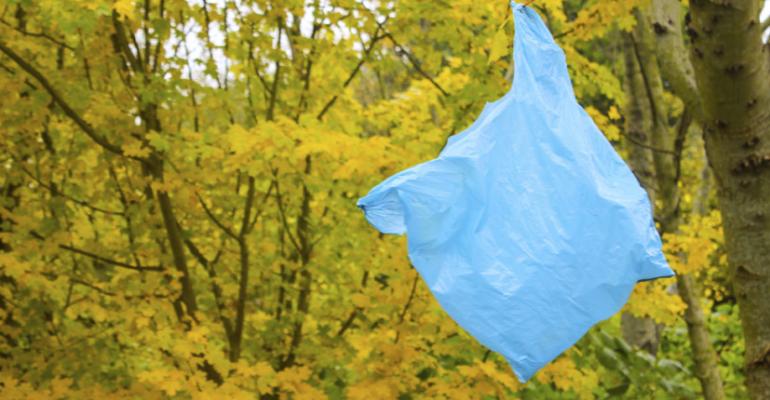 &ldquo;If plastic bags are going to be banned, then there should be a state law rather than laws by individual cities with different language and different requirements.&rdquo; &mdash; JACK BROWN, chairman and CEO of Stater Bros. Markets

As the California legislature prepares to consider a new proposal to ban single-use plastic bags throughout California, retailers in Los Angeles are already dealing with implementing the ban.

The ban in L.A. took effect Jan. 1, and retailers there are adjusting, though some expressed dissatisfaction with the local ordinance.

Some were reluctant to discuss the issue for fear that anything they said might have some unforeseen negative impact on passage of a statewide ordinance. Under that proposal, which will be formally introduced in the California legislature later this year, not only would single-use plastic bags be banned throughout California, but loans and grants would also be available to manufacturers who convert their businesses to making reusable bags while retaining workers and retraining them during the phase-out of single-use plastic bags.

More than 90 municipalities in California have passed some form of anti-plastics legislation — including San Francisco, San Jose and now Los Angeles — three of the state’s largest cities — with at last 40 more considering similar measures, a spokesman for the California Grocers Association told SN. He said he expects the latest proposal for a statewide plastics ban to pass “because two of the legislators that opposed a similar bill last year are on board this time.”

Jack Brown, chairman and CEO of Stater Bros. Markets, San Bernardino, expressed dissatisfaction with the current situation. “If plastic bags are going to be banned, then there should be a state law rather than laws by individual cities with different language and different requirements,” he told SN. “But the real issue for me is, why does the law only deal with plastic bags at grocery stores? I see much more trash from fast-food restaurants than I ever see with grocery bags. And the bags at big-box stores, especially the ones for general merchandise, are ten times the size of grocery bags.

“And banning plastic bags only at grocery stores ends up as a tax on food because the customer has to pay something for the reusable bags or the paper bags above the shelf price of the groceries.”

Stater does not have any stores in the city of Los Angeles, though it does have five units in smaller cities that have passed anti-plastic ordinances, Brown said. Shoppers at those stores were initially very upset when the laws took effect, he recalled, “and they felt it was unfair, but our people explained that we had no choice and we had to comply with the law. Our people helped make it acceptable to customers.”

Stater offers customers a choice of reusable woven bags for 99 cents each or paper bags for 10 cents, Brown said, noting that the paper bags are 100% recyclable. He said he wasn’t sure what percentage of customers use one or the other, ”though customers understand more clearly what the law is and they’ve been bringing in their own bags more often.”

Like Stater, Gelson’s Markets, Encino, already had experience dealing with local ordinances that banned plastic bags in four cities in which it operates, which prepared it for the L.A. ban, which affected nine additional stores. “But our hope is there will be more uniform laws that apply to all stores,” Yvonne Manganaro, director of marketing for the 17-store chain, told SN.

Initially Gelson’s viewed the ban as “a real challenge,” she said. However, the transition has been easier than the chain anticipated, she noted. The earlier bans on plastic bags were in smaller communities “where you could still get plastic bags by going to the next town over. But when the ban took effect in Los Angeles, everyone understood better what was happening — that this is a new way of shopping — so they’ve been more responsive in how they shop.

“We retrained all our front-end associates in December about how to pack reusable bags, and because we were previously using hippo sacks that held up to 35 pounds, which is similar to what the reusable bags can hold, we haven’t been as affected as some other operators might be.”

Customer reactions have run both ways, Manganaro said. “Some customers who are more politically active and connected understand the change, while others have been more vocal in saying the ban is not right and Gelson’s needs to do something about it.”

Besides offering paper bags for 10 cents each and reusable woven bags for $1.25, Gelson’s also offers a reusable plastic bag that can be used up to 125 times or more, which it sells for 34 cents each or three for $1.

“We were initially reluctant because of concerns that offering a low-cost reusable bag made of an alternative plastic might not set the right image and might make consumers wonder why were selling plastic bags,” Manganaro explained. “Ultimately we did offer them, and in retrospect, we made the right decision because those bags are quite strong, and when customers come in, many go by a display near the front-end, pick up a couple of bags and do their shopping, and they are not particularly concerned if the bags are reusable.”

She said the chain has been surprised by the consumer demand for reusable plastic bags. “We were selling about 500 a week last year, and we had ordered large quantities in advance of the L.A. ban. But we sold an average of 1,000 a week for the two weeks before the ban, and in the first month after the ban took effect, we had sold another 10,000.”

Two years after a ban on plastic bags affected a Gelson’s in Calabasas (north of Los Angeles), Manganaro said 50% of customers there bring reusable bags, of which about one-third bring the reusable plastic bags.

“If there was any initial loss of customer count in Calabasas, it was only short-term, and we believe most customers have already adjusted to the change,” she noted.

Customer reactions at the Dana Point store, in a suburban community in Orange County, south of Los Angeles, were similar to those in Calabasas, she noted. In West Hollywood, which imposed a ban last year, the Gelson’s store serves a more urban clientele where customers tend to make smaller purchases, she said — and the level of environmental awareness tends to be higher — so the use of reusable bags is at 60% because many customers were already bringing in their own bags, she said.

One thing Gelson’s has learned, Manganaro said, is the importance of convenience. “When customers forget to bring their own bags, we need to offer a variety of options. Having something less expensive and convenient is important, and that’s become part of our communication with customers.

“A customer who balks at paying $1.50 for a bag won’t balk at 34 cents; and some people who prefer paper don’t view the 10-cent charge as a deterrent.

“It will be interesting to see how things develop and if stores will eventually sell paper bags on the shelves or sell single-use plastic bags in a box for use as trash-can liners or to pick up after their animals.”

The recycled plastic bags some chains in Los Angeles are using are available from two companies — Command Packaging, Vernon, Calif., and Roplast Industries, Oroville, Calif. — who based the manufacturing process on a European model that uses agricultural plastic to manufacture other recyclable products like grocery bags.

According to a message on the Roplast bags, “This reusable bag once grew your food — now it’s being used to carry it home. This closed-loop circle does not have to stop here. When you have finally worn this reusable bag out, return it to a participating store to be recycled again. These are valuable materials — we would love to use them again.”

Roplast developed the bags in 2007 when San Francisco imposed a plastic-bag ban. According to Robert Bateman, Roplast president, “Reusable plastic grocery bags are well established in Europe, and the use of these bags is considered to be the single most effective step in minimizing the environmental impact of grocery checkout bags.

“Ideally shoppers will bring the bags back to the grocery store several times and then place them with other compostable items destined for municipal composting facilities.”

Pete Grande, CEO of Command Packaging, said his company is investing up to $25 million to supply the industry with “smarterbags,” which are made from recycled agricultural plastic that carries a lower carbon footprint than reusable or paper bags.

“It’s time to address the single-use grocery bag issue without initiating a return to less environmentally friendly options like paper bags,” Grande said. “When we recycle with a purpose, we are diverting plastic from landfills, which is recycled and used to manufacture other necessary products, creating a closed loop.”

He suggested retailers have a strategy to encourage reuse and recycling. “Showing your understanding and support for the ordinance will help put your customers at ease.”

He also suggested retailers avoid putting meat or liquids in reusable woven or sewn bags “because the pores in these bags hold bacteria easily.”