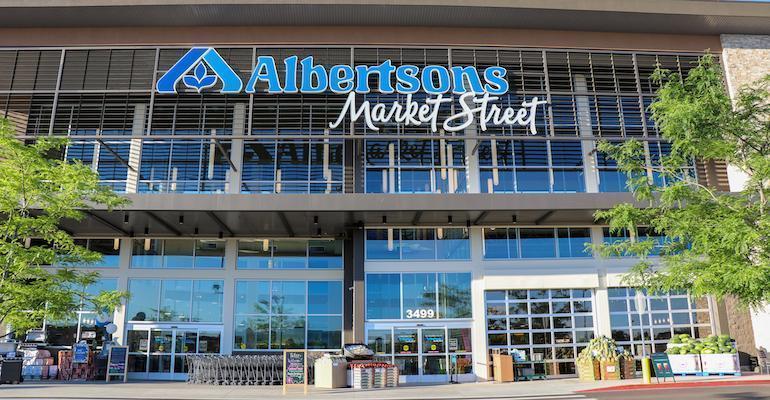 Albertsons Cos.
In connection with the $24.6 billion merger transaction with The Kroger Co., Albertsons Cos. was slated to pay its shareholders a special cash dividend of $6.85 per share, totaling about $4 billion, on Nov. 7.
News>Retail & Financial

After lawsuits filed by three state and the District of Columbia attorneys general, a county court in Washington state has paused Albertsons Cos.’ planned $4 billion dividend payment in connection with its proposed acquisition by The Kroger Co.

A King County Superior Court commissioner yesterday granted a motion by Washington AG Bob Ferguson (D.) for a national temporary restraining order to block the Albertsons $4 billion dividend payment. As part of the Kroger-Albertsons merger transaction, Boise, Idaho-based Albertsons was slated to pay its shareholders a special cash dividend of $6.85 per share, totaling about $4 billion, on Nov. 7.

Ferguson and the AGs of D.C., California and Illinois earlier this week had filed suit to halt the Albertsons dividend payment pending a comprehensive review of the $24.6 billion Kroger-Albertsons merger deal, announced Oct. 14, by state and federal regulators.

“Putting the brakes on this $4 billion payment is the right thing for Americans shopping at their local grocery store,” Ferguson said in a statement.

Grocery prices have gone up, and you know what else has?

It's clear that corporations have been hiding behind inflation — not only to pass along their increased costs to consumers, but also to rake in bigger profits.https://t.co/feeKdWWoNP

The AGs claim the dividend’s size will hamper Albertsons’ ability to operate and compete during the merger agreement’s antitrust review. Kroger and Albertsons estimated a potential early 2024 closing for the transaction, pending regulatory approval, yet industry observers and Wall Street analysts said the process could take two years. In addition, Ferguson cited a Securities and Exchange Commission filing by Albertsons indicating that the company  plans to pay for the $4 billion dividend with $2.5 billion in cash on hand and borrow the rest.

Yesterday evening, Albertsons released a statement describing the temporary restraining order halting the special dividend payment as unfounded. The company also noted that its business and finances are healthy. A court hearing on the preliminary injunction is scheduled for Nov. 10.

“Albertsons Cos. intends to seek to overturn the restraint as quickly as possible because the temporary order was based on the incorrect assertion that payment of the special dDividend would impair its ability to compete while its proposed merger with The Kroger Co. is under antitrust review,” Albertsons stated.

“Albertsons Cos. continues to maintain that the lawsuit brought by the state of Washington, and the similar lawsuit brought by the attorneys general of California, Illinois and the District of Columbia, are meritless and provide no legal basis for canceling or postponing a dividend that has been duly and unanimously approved by Albertsons Cos.’ fully informed board of directors,” Albertsons explained. “Albertsons Cos. is a thriving business which has delivered over $75 billion in revenues in the rolling four quarters ended Sept. 10, 2022, following strong performance of $71.9 billion in revenues in fiscal 2021. Albertsons Cos. is well-capitalized, with limited debt and significant free cash flow and is in a strong position financially. The size of the dividend reflects the company’s strength, rather than the illogical and damaging accusation that it is an attempt to weaken the company.”

“Albertsons and Kroger are the second- and third-largest grocery chains in the U.S., with nearly 5,000 stores between them, including hundreds in California,” Calfornia AG Bonta commented this week. “As inflation drives up grocery prices, a decrease in competition has the potential to be devastating for hardworking California families and for those who work at these stores. This proposed merger is far from a done deal, making Albertsons’ decision to give away one-third of its market cap very concerning. I urge the court to delay this payout to allow for a thorough consideration of its impacts on Albertsons’ ability to compete while the proposed merger is under review.”

Leaders of the U.S. Senate Judiciary Subcommittee on Competition Policy, Antitrust and Consumer Rights said last month that they plan to hold a hearing in November to address the Kroger-Albertsons transaction. So far, no date has been announced.

“The special cash dividend included in the proposed Kroger-Albertsons acquisition is particularly troublesome because of the adverse impact on long-term competition in this industry,” the lawmakers said in the letter. “Rather than using these funds to invest in workers, improve stores, reduce prices or simply strengthen Albertsons’ cash reserve, the $4 billion will go directly to Cerberus and other shareholders — a hit that risks ‘bankrupt[ing] the debt-ridden supermarket chain.’”

In its statement, Albertsons emphasized its firm financial foundation and that returning capital to shareholders has long been a strategic pillar.

“The company’s plan to return capital to stockholders is part of its long-stated capital-return strategy and does not change the fact that Albertsons Cos. is in the strongest financial position it has ever been. The company remains fully committed to investing in the associates, stores and digital capabilities that have made its recent growth and strong performance possible,” Albertsons said. “Albertsons Cos. is confident that it will continue to make strategic progress following the payment of the special dividend, given its strong cash flows and low debt profile. After payment of the special dividend, Albertsons Cos. will have approximately $3.0 billion of liquidity, including approximately $500 million in cash and approximately $2.5 billion available under its already existing asset-based lending facility, and expects to continue to generate strong revenues and positive free cash flow, furthering increasing liquidity.

“Albertsons Cos. intends to argue vigorously based on the factual record that there is simply no basis to continue restraining the payment of the special dividend,” the retailer added.

Albertsons’ acquisition by Cincinnati-based Kroger will form a national company with 4,996 stores, 3,972 pharmacies, 66 distribution centers, 52 manufacturing plants, 2,015 fuel centers and more than 710,000 associates across 48 states and the District of Columbia. Together, Kroger and Albertsons generated roughly $210 billion in revenue, $3.3 billion in net earnings and $11.6 billion of adjusted EBITDA in fiscal 2021.

United Food and Commercial Workers (UFCW) and Teamsters welcomed the temporary restraining order decision by the Washington court, having already voiced concerns about the merger's impact on grocery store workers and customers.

“We applauded these attorneys general when they filed their lawsuits," UFCW Locals 367 and 3000 and Teamsters 38 of Washington and UFCW Local 7 of Colorado and Wyoming said in a joint statement, "and we applaud Washington State Attorney General Ferguson and his team for presenting a strong case yesterday and, at least temporarily, putting a pause on Albertsons' $4 billion payout for rich stockholders instead of investing in lowering prices, improving store safety and increasing the wages of the workers in the store, who made the stores function all during the height of the COVID-19 pandemic.”