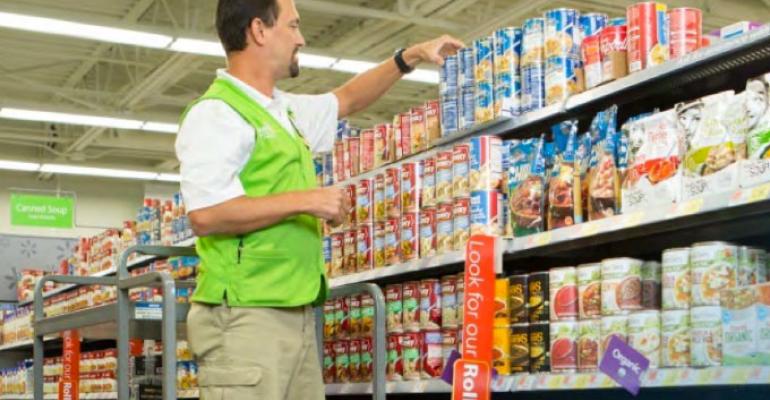 Foran: Walmart stores improving, but so are expectations

&quot;I want to be clear,&nbsp;we still have lots of room to improve.&nbsp;And we&rsquo;ve already put another line in the sand and have raised the bar higher for where we expect them to get to.&quot; &mdash;GREG FORAN, Walmart

Around two-thirds of U.S. Walmart stores have met Greg Foran’s challenge to increase their “clean, fast and friendly” ratings to internal standards by his Oct. 1 deadline — a figure that improved dramatically from when Walmart’s U.S. CEO issued the challenge in February.

Foran, however, stopped well short of taking a victory lap, noting that “67% is only really getting us to, at best, mediocrity,” and saying he’d raised the internal standards again.

“I want to be clear, we still have lots of room to improve,” Foran said during the Bentonville, Ark.-based retailer’s investor conference in New York Wednesday. “And we’ve already put another line in the sand and have raised the bar higher for where we expect them to get to.”

When Foran introduced the “clean, fast and friendly” challenge in February, just 16% of Walmart’s nearly 4,600 U.S. stores were at standard. Ratings are derived from customer surveys and take into account their perception of things like checkout speed, store cleanliness and employee engagement with shoppers.

In revealing Walmart now expects stores to attain still higher scores, “a whole bunch of stores that were green are now going to find themselves red,” Foran said. “But they’ve all been told that. They’ve bought into that. And they’ve got to strive.”

Foran drew a clear line between expectations of better customer experiences in stores and better comp sales — a critical hurdle for Walmart, particularly in light of the company’s other revelation Wednesday that fiscal 2017 earnings would be even lower than initially expected as big investments in employee pay rates and e-commerce flow through.

Foran also said that the company would reduce planned store rollouts while it works on improvements to both Supercenters and its smaller food-and-drug Neighborhood Market stores. The latter format, despite showing strong comp sales as a group, has struggled when in competition with good supermarket retailers, Foran acknowledged.

“To be completely candid, when we're up against someone who is really good at running supermarkets, frankly our fresh offering has not been on par with what it takes to win in those environments,” he said. “And if we're opening stores where the competitor is not particularly strong, then generally we will do pretty well and a lot of that is driven by some pretty significant price gaps that we can generate.

“So, we need to fix what we do in fresh. We need to make sure we do a great job with the services, whether it's grocery home shopping, whether it's pharmacy. And so, it's appropriate that we be pretty thoughtful about where these things go and we get that model working right and we make sure that we get them located exactly where we want to get them located. We get gas on them wherever we can. We get on the right distance away from — from Supercenters. We get them on the right side of the road, all those sort of things. So, I'm really excited about what we can do with Neighborhood Markets, but we've got to fix some of these basic things, and then we can get into them.”

Supercenter rollouts will slow to 50 or 60 stores, including remodels, next year while the company pilots improvements that Foran said would make stores more attractive, easier to shop and better accommodate the integration of digital retail.

Walmart on Wednesday reopened its first remodeled Supercenter with some of the test features in Rogers, Ark. The store includes things like service meat and fish departments, a new fresh produce layout, an expanded deli with smoked meats, hot meals and catering menus, and fresh donuts and bread in the bakery. Lower-profile shelving provides greater visibility across stores, and showcases an expanded baby department.

Foran continued to show a particular enthusiasm for improving the fresh presentation — and reputation — at Walmart, with a plan to first improve the basics, “building on that and ultimately transforming our fresh from the farm to the checkout. We'll do it with much better assortment, much better execution, much better processes, and a great supply chain.

“Now, we've got lots of work to do, but I can tell you customers are starting to notice the difference. In the last 52 weeks, market share in fresh is up 26 basis points. Unit comps have improved 1.5%; markdowns are down 70 basis points since last year. Our price gap in meat is up 200 basis points versus last year. And we also know that the large majority of our customers, would purchase affordable organics, so our organic offering continues to expand, and it's now much easier to find on shelf. We're also focused on providing healthy snacks and easy-prep meals. We'll keep driving hard towards our ambition to save people money, so they can eat better.”

Foran reiterated remarks of CEO Doug McMillon who identified “winning with stores” as a top strategic priority. Foran said the company would grow U.S. sales faster than the overall market in the coming years, and described “a detailed, well-resourced strategic plan” calling for the company to improve the supply chain and use technology to deepen customer relationships.

Although Walmart on Wednesday said overall sales for the current 2016 fiscal year would likely range lower than 1% to 2% expectations due to currency fluctuations, U.S. sales would be up around 3.5% for the year. Foran said that U.S. comp sales and traffic were up and unit sales were “trending north.”

In other remarks, Foran said a practice of “top-stocking” items at Neighborhood Market stores — allowing store employees to replenish lower shelves from top shelves as opposed to returning to the back room to retrieve items — has improved service conditions and reduced inventories and will be soon rolling out to Supercenters.

Acknowledging the growth of hard discounters like Aldi, Foran said Walmart had doubled its private brands team and was at work identifying assortment gaps and extending private brand lines.

“Private brands are key to addressing the price gap with hard discounters,” he said. “They are critical to our growth aspiration.”