Giant makes a splash in Philadelphia 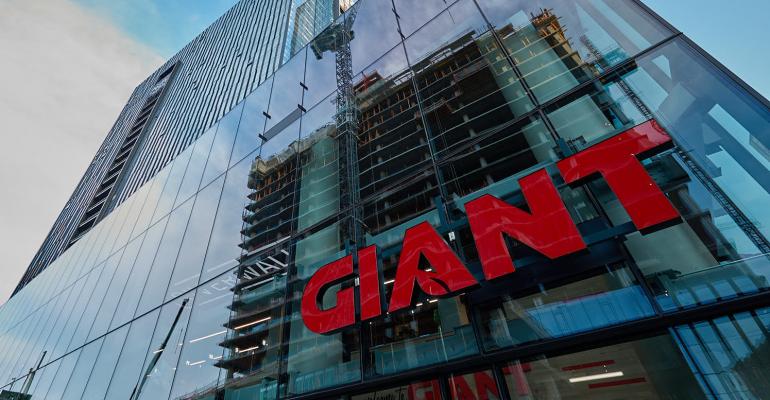 The Giant Company today opened a 65,000-square-foot flagship store in downtown Philadelphia that marks its first two-story location and first supermarket in a residential tower.

Located at the corner of 23rd and Arch Streets, the new Giant supermarket is part of the Riverwalk project, an 8.5-acre, mixed-use development along the Schuykill River that includes two luxury residential towers plus commercial, retail, hospitality and community space. Giant’s store is situated on the second floor of the 26-story Tower 1 at 60 North 23rd St.

Related: The Giant Company stays on growth path in Pennsylvania

“This is a very big day for our company, but it’s also a very big day for Philadelphia — a city that we love, and a city where we’ve made a commitment to bring a positive impact in the way that we do business, the way that we employ and the way that we give back. We’re trying to make a difference here because we believe in the future and the potential of this great city,” Giant President Nicholas Bertram said in a press conference at the store’s grand opening on Friday. “We don’t take that responsibility lightly, and we don’t come to it without anything other than great ideas and innovation.”

“There are so many fantastic, creative, unbelievable people who are part of this company and have worked tirelessly to bring the very best in food innovation, not just in this state but literally in the country,” Bertram said of the Riverwalk store. “We traveled all across the country to find out what was going on and what was good in other big cities. We took those ideas, made them better and, here you go, Philadelphia.”

Giant Riverwalk houses a ground-level parking garage with direct access to the store’s lobby. Upon entering the lobby, which features the work of local artists, customers see a Starbucks cafe and a Giant Direct online grocery pickup station. Shoppers can use an elevator, escalator or stairs to access the full store on the second floor, and a “cartalator” moves shopping carts between levels. Residents in the tower above the store have access to a private elevator that brings them directly to the second level of the store.

A food hall is at the heart of the Riverwalk store, including Mission Taqueria Mexican cuisine; soup and salads from Saladworks; premium sushi from Hissho Sushi; and made-to-order sandwiches, flatbread pizza, smoked meats, hot food and gelato. With floor-to-ceiling windows, the food hall overlooks the Schuylkill River, 30th Street Station and the riverside bike path. Along with an indoor seating area, customers can eat and drink on the food hall and store’s terrace, which has lounge-style furniture and fire pits.

The store also has a Beer Garden — with a self-serve tap wall offering over 40 craft beers, wines, hard seltzer, cider and kombucha — plus Giant’s largest beer and wine collection, including local craft beers and imports, Old and New World wine, prosecco and champagne.

“We can’t wait to welcome you into this newest store, our urban flagship for The Giant Company,” Paul Madarieta, director of urban retail for Giant, said in kicking off the press conference. “This store is a beautiful symbol of our company’s innovative and courageous spirit, our passion for this city and its wonderful people, and of course our love and passion for food. It’s been an incredible honor to be part of this project, and I hope you all enjoy what we’ve created for you.”

Other highlights of the Riverwalk Giant include the chain’s biggest plant-based section (meat and fish substitutes, vegan cheese, ice cream and other desserts); a produce area with 600 varieties of fresh fruit and vegetables, including many from local farms; a meat and seafood department featuring a new aged beef program; a full-service deli with an expanded prepared food and grab-and-go meal selection, a charcuterie station and a mozzarella station; and a large cheese section with a wide assortment of domestic and imported cheeses; and locally sourced products across the store.

“Over the last few years, I’ve been glad to see The Giant Company make significant investments in Philadelphia, on many levels, all with the single goal of enhancing our great city. Not only will the Riverwalk Giant serve families by providing access to fresh and nutritious food, it will also create jobs for Philadelphians, which is especially important right now,” Kenney said. “I congratulate The Giant Company on the opening of its Philadelphia flagship and wish them continued success in our city.”