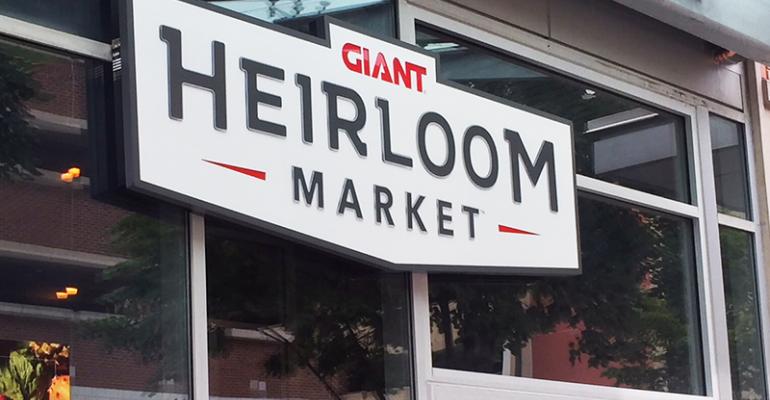 The new 9,950-square-foot Giant Heirloom Market — the second location to be opened in the city — is situated conveniently near Drexel University, the University of Pennsylvania and the area’s hospitals and “offers an experience uniquely crafted to meet the needs of families and neighbors in the University City community,” according to the company.

The first Giant Heirloom Market opened in Philadelphia’s Graduate Hospital neighborhood in January. The small-format stores are designed to meet the needs of busy urban customers, according to Giant Food, an Ahold Delhaize USA grocery chain. The company is in the midst of an aggressive expansion plan and e-commerce launch.

Features of the new store include:

•  To best meet the needs of its busy customers, the store will also offer GIANT Direct, Powered by Peapod. Through GIANT DIRECT, customers can access tens of thousands of items found in GIANT stores, all of which can be easily ordered online for next-day pick up or delivery.

•  The innovative Scan It! mobile app lets customers build a shopping list and check items off as they shop, allowing for a faster checkout.

The store will operate 6 a.m.-10 p.m., seven days a week and will employ approximately 50 full and part-time partners.

To celebrate the store opening, Giant made two $2,500 donations: one to the University of Pennsylvania's Agatston Urban Nutrition Initiative, which helps build and sustain healthy communities by promoting nutrition education, food access and sovereignty, and physical fitness in West Philadelphia; and to Sharing Excess Inc., a Drexel University-based nonprofit that helps students share food excess with community members in need.

“Seeing the impressive crowd of students, professionals, and neighborhood residents that came through our doors on our opening day, our entire team is energized by the enthusiastic response we’ve already received,” said Angel Cordero, store manager, GIANT Heirloom Market. “We’re so excited to be part of the inspiring University City community.”