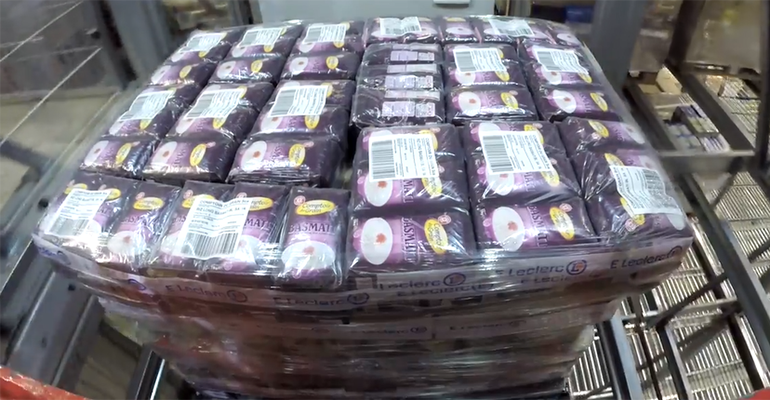 Walmart plans to build what the company calls its “first high-tech distribution center for fresh and frozen groceries” in Shafter, Calif.

The new facility will process 40% more products than a traditional DC, according to Walmart, which announced the project in a blog post on Thursday. The company said it expects to break ground “in the coming weeks” and open the facility in the fall of 2020.

“Supply chain is the competitive advantage for retail operation. I’m excited about Shafter because of the technology that we’re going to be using,” Tim Cooper, senior vice president of supply chain at Walmart, said in a video about the project. “Witron is an exciting company, and they have a great reputation,” he explained, describing its equipment as intuitive and reliable.

“The beauty of this is that we take one of the most manual jobs that we have, and we create this high-tech enablement to get faster, better service, better quality and really position ourselves to be relevant for future operations,” Cooper noted.

Instead of manually stacking boxes and assembling pallets, the Shafter DC will use robotics to build a more flexible and dense pallet that will allow more products to fit into a truck, reducing transportation costs, according to Walmart. The technology also is expected to cut down on damaged items, resulting from instances when a heavy item like a watermelon is placed atop a case of strawberries, the company said.

“Every product is measured and documented so that we know how to handle it,” Project Engineer Shayne Wahlmeier said in the blog. “A computer algorithm shows all the cases ordered for a given store and determines how to palletize them to maximize the space on a pallet or trailer. It also takes into account density — what’s crushable, what’s not.”

Cost savings from more efficient transport and reduced food waste can be passed on to customers, who in turn will be more confident that a product is in stores when they come in to shop.

“This is going to allow us to deliver consistently,” Cooper said. “It means that we’ll likely have fresher product coming to [stores]. Speed will be the name of the game for us, and we’ll be able to reduce the cost to serve. The customers will have what they’re looking for, and we’ll be able to provide a better service using the most current technology.”

Tech pilots on the way

Supply chain and technology are two key areas of Walmart’s planned $11 billion in capital expenditures for fiscal 2020. And on the grocery side of the business, several technology-focused pilots are under way.

In late July, the company said it had teamed up with Waymo — formerly Google’s self-driving car project — to test an online grocery service in which driverless vehicles pick up customers at their homes and take them to the store to collect their orders. The service is being piloted in Chandler, Ariz.

About a week later, Walmart announced a partnership with automation specialist Alert Innovation in a test of its Alphabot robot to help fill online grocery orders faster. The system, developed for Walmart, is being put into action at the retailer’s supercenter in Salem, N.H.

And in September, Walmart said it began testing a crowdsourcing-based service that enlists drivers using their own vehicles to provide last-mile delivery of groceries ordered online. Called Spark Delivery, the service is being piloted in New Orleans and Nashville, Tenn., and is due to be rolled out to several more metropolitan areas this year.

Bentonville, Ark.-based Walmart aims to make online grocery delivery to 100 metropolitan areas — covering 40% of U.S. households — by the end of 2018 through its own services and third-party providers. As of late September, the company said it had online grocery delivery in over 50 markets and more than 2,000 grocery pickup locations. The retailer projects that it will have 2,140 grocery pickup sites in 430 markets, covering 69% of U.S. households, by the close of its 2019 fiscal year at the end of January.

The company said at its annual analysts meeting earlier this week that it expects to have about 3,100 curbside pickup and 1,600 delivery locations by the end of fiscal 2020.