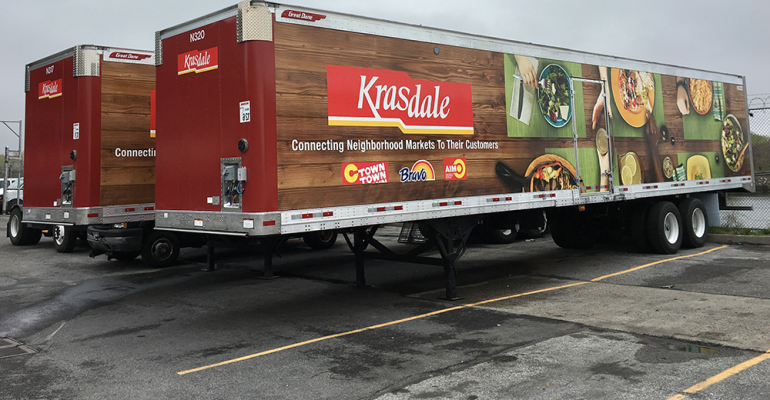 Photos: Krasdale Foods
Krasdale has $675 million in annual sales and serves more than 300 independent supermarkets in the Northeast and Florida, including about 250 in metro New York.
News>Retail & Financial

Krasdale Foods looks to build on its position

The food distributor operates a 325,000-square-foot distribution center in the Hunts Point section of the Bronx, overlooking Manhattan, Brooklyn, Queens and Long Island. That location — plus a well-honed business model and strong relationships with neighborhood grocers — gives Krasdale an edge in competing with bigger players expanding in the region, said President and Chief Operating Officer Steve Silver. 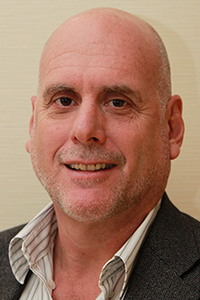 “We are strategically located. There is nobody in the dead center of the New York metropolitan area doing what we do,” Silver (left) told Supermarket News in an interview. “So we have a huge tactical and logistical advantage over anybody to serve supermarkets inside that area.”

White Plains, N.Y.-based Krasdale, which has $675 million in annual sales, serves more than 300 independent supermarkets in the Northeast and Florida, including about 250 in metro New York. Store banners it supplies include C-Town, Bravo, Aim and Market Fresh supermarkets (ranging from around 10,000 to over 20,000 square feet) as well as mini-groceries Shop Smart Food Markets and Stop 1 Food Mart, which include small bodegas with one register, Silver said. The company also serves delis, drugstores, convenience stores and a range of other independent retailers selling food and groceries, reaching around 2,500 retailers overall.

Silver added the title of president earlier this month as part of the succession plan at Krasdale, currently led by chairman and CEO Charles Krasne. Founded in 1908 as A. Krasne Inc., the company became Krasdale Foods in 1972.

“We’ve managed to survive and succeed because we’re very good at what we do. We have a fairly niche market, supplying supermarkets that we sponsor, typically in urban areas but also in community areas. They’re not your typical 60,000- to 100,000-square-foot box, but stores that are very tailored to the community that they serve,” he explained. “To do that, you have to be very nimble, and you have to be able to serve a wide diversity of neighborhoods. Fortunately for us, it’s a difficult lock to pick for some of the big boys — the Walmarts, the Targets and the Amazons — and we do it very well.”

C-Town and Bravo supermarkets are just two of the banners served by Krasdale in the New York metropolitan area.

Krasdale will need to continue its agility as larger companies zero in on its trade area.

In September, Walmart — with stores across metro New York but no significant New York City presence — launched a “city grocery experience” to serve New Yorkers through its Hoboken, N.J.-based Jet.com subsidiary. To process orders, Jet built a dedicated e-commerce fulfillment center in the Bronx. A couple of months earlier, online grocer FreshDirect had opened a 400,000-square-foot facility in the South Bronx to bolster its market share.

The rising competition also includes brick-and-mortar retailers. German hard-discount grocer Lidl entered the metro New York market in December with the opening of a store in Staten Island. Just weeks before, Lidl had acquired Best Market, whose 27 stores include 24 locations on Long Island, two in New York City and one in New Jersey. Plans call for those stores to begin converting to the Lidl banner this year.

Also boosting its presence in the area is Ahold Delhaize USA’s Stop & Shop, which in early January purchased King Kullen, whose 37 supermarkets on Long Island will join Stop & Shop’s 51 stores there. And this fall, Wegmans Food Markets is slated to open a store in Brooklyn, marking its first New York City store.

All will have to tangle with an already highly competitive field that includes Aldi, Walmart, Target, Costco Wholesale, BJ’s Wholesale Club, ShopRite, Whole Foods Market, Trader Joe’s, Key Food Stores and a host of independent and specialty grocers, among others.

“It seems like everybody in the world wants to sell the products we sell, whether that be from traditional distribution, online ordering, home delivery, you name it. Everybody wants to get into food,” Silver said. “It’s a challenge.”

But Krasdale is up to the task, he noted. For one, its metro New York supermarket owners’ stores are entrenched in their neighborhoods and have an ear to the ground on customer needs — something larger operators might find hard to match. That proximity to shoppers’ residences also counteracts some of the convenience allure of online ordering.

“That’s how they survive. They know what their consumers want and they give it to them. They cater to their neighborhoods very well,” Silver said.

A Nearby, Reliable Partner

“Not only are we a supplier, but we provide a myriad of services to help an independently owned supermarket operate as if it was part of a vertically integrated chain,” according to Silver.

“We create merchandising programs and listen to our owners to get their input for their particular communities. While we have a base marketing and merchandising program, we tailor it to each individual store and allow them to have much input into the products they sell, because we’re smart enough to know that they know their community better than we do,” explained Silver. “And with our large field force, we bring a lot of expertise that an independently owned supermarket couldn’t afford on its own — whether that’s marketing, merchandising, regulatory, financial, front-end, etc. We have a very large presence out on the street serving our customers.”

Krasdale distributes about 11,000 grocery SKUs from the Hunts Point facility. Another 11,000 to 12,000 SKUs in dairy and frozen are sourced through partners. Retailers also have access to thousands more SKUs in meat, produce and specialty products via arrangements with preferred suppliers. That’s where CSS and KoolTemp come in.

“CSS is a supply company where we arrange for somebody other than ourselves to distribute product,” Silver said. “We might have them deliver direct or drop off at our distribution center, cross-dock it and put it on our trucks.”

KoolTemp provides frozen and refrigerated foods through partnership with Bozzuto’s Inc. in Cheshire, Conn. “We have a fleet of refrigerated trailers and actually shuttle down between 12 and 20 trailer loads of product overnight, hand them off to our local delivery guys and then deliver the orders to our group of supermarkets,” he said. “We’ve been doing this now for about five years. It’s an extremely competitive program.”

About 15% of the Hunts Point DC’s volume is the Krasdale private label. The line includes 700 to 800 food and nonfood items that Silver said offer grocery stores a lower-priced yet high-quality option for their customers.

“Since we serve diverse communities, our product mix is continually changing. We don’t have an unlimited amount of space, so we tend to distribute the items that move the most and align ourselves with other preferred suppliers to pick up products that just wouldn’t be cost-efficient for us to carry in our distribution center,” he added. “We bring the buying power of 250 supermarkets to play and can typically negotiate a very good deal on behalf of everybody to get supplied at the right price so they’re able to be competitive in the markets that they serve.”

Also helping retailers stay competitive is Waverly, Krasdale’s financial services arm. “We provide capital, lines of credit and long-term loans that allow our supermarket owners to keep up, keep their stores looking nice and not have to deal with banks,” Silver said.

Meanwhile, Krasdale expects continued growth from its operation in Florida, where its supermarket customers do business under the Bravo banner.

“Because of the Hispanic and Caribbean population demographics in Florida, our Bravo format is a great platform for that market. We had supermarkets in the New York City area that were seeking to go down there, so we made strategic alliances with suppliers there and set up corporate offices to provide the services that we do up here. The only difference is that we arrange for all the product to be supplied by other distributors,” said Silver. “We’ve been in Florida now about 14 years, and we’ve grown from a couple of supermarkets to 50 between Orlando and Miami.”

Though online grocery shopping and delivery present a growth avenue, for now that remains a niche offering in Krasdale’s customer base. The company provides e-grocery services to retailers through arrangements with Instacart and ShopHero.

“I don’t think it has caught on in a huge way. It’s a certain percentage of a store’s volume; I think they look at it as being incremental,” Silver said, adding that he believes most consumers still like to go to a supermarket. “We make the service available, but I don’t think it’s a big piece of many of our store owners’ businesses yet.”

“We just started supplying them recently, and we’re hoping to expand that. Rather than setting up the whole [online grocery] infrastructure to do what they do, we can supply them,” he said.

Long Island has some up-and-coming grocery operators as well, Silver said, mentioning the fast-growing chain Uncle Giuseppe’s, which specializes in Italian foods and catering. “There’s an opportunity for small, niche stores out on Long Island — North Shore Farms and Uncle Giuseppe’s, who we do business with and are looking to expand with. Very good high-end prepared foods, meat and produce, and it seems to be taking off. They offer a really good alternative to the Stop & Shops and the ShopRites.”

Going forward, Silver sees Krasdale’s key challenges as driving growth — which he called “more organic at this point” — as well as adding new products, services and customers and developing its workforce, including attracting new talent.

“It’s a unique market that we serve, and it’s under attack,” he said. “But I think we’re fending it off very well.”