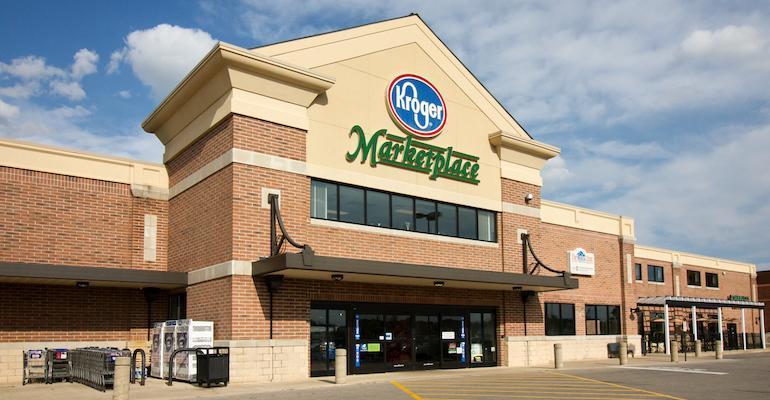 Kroger
Under the latest offer from Kroger Houston, all frontline associates would get a pay raise over the next six months.
News>Retail & Financial

The Kroger Co. said it has invested $56 million in wage increases and worked to ensure access to affordable health care benefits in its Houston division, where the company remains in contract talks with United Food & Commercial Workers (UFCW) Local 455.

Kroger Houston said last week that, after months of negotiations, UFCW 455 hasn’t scheduled a vote for Kroger members on the retailer’s latest contract proposal or allowed them to vote on the company’s effort to shift pension benefits to a new variable annuity pension plan (VAPP).

Meanwhile, UFCW 455 is calling on Kroger to reinstitute $2-per-hour “hazard pay” for frontline workers that ended in mid-May. The Houston-based union also said its Kroger members face higher costs for health benefits and care under the retailer’s proposal to transition associates from the union’s current South-Central Health and Welfare Fund, which is managed by a board of trustees, to a company-administered plan.

Kroger Houston reported that its “last, best and final offer” was presented to UFCW 455 on Aug. 19. Cincinnati-based Kroger Co. unveiled the pension transition plan in July.

Related: Kroger provides $130 million in 'thank you' pay for associates

“Kroger’s commitment to increase wages and ensure our associates have access to world-class affordable, secure and reliable health care benefits is a core priority for the company,” Kroger Houston Division President Joe Kelley said in a statement.

“Our plan removes any uncertainty frontline associates experience with their current health and welfare trust fund plan,” Kelley added. “We believe this is the right path forward for our associates.”

Under the latest offer, all frontline associates would get a pay raise over the next six months, Kroger Houston said, noting that the increase follows wage hikes earlier this year and $8 million in wage increases in October 2019. The division said it also will spend more than $75 million annually on health care for hourly associates, who will pay $32 for individual or $172 for family monthly coverage in a company-managed plan, versus a national monthly average cost of $103 for individual and $501 for family coverage.

“Kroger believes the South-Central Fund is unstable because it significantly reduced benefits in 2019 for Kroger associates,” Kroger Houston stated. “This move to a company-administered plan is a critical step in ensuring stable, affordable and secure benefits for Kroger Houston associates now and in the future.”

In an FAQ to members, UFCW 455 — which represents Kroger store and meat clerks — said the Kroger health plan will increase employee costs, including their monthly contribution, deductibles, health care visits (doctor, emergency room and urgent care), prescription drugs and other out-of-pocket expenses. More important, the UFCW 455 said, oversight of health benefits would pass from the health care trust fund board to Kroger.

“Kroger’s ‘K-plan’ is a power grab to gain control of your South-Central Trust Fund, which is currently run by a board of trustees that includes your union representatives. Under the K-plan, your health care will no longer be decided by a labor-management partnership, known as the ‘trust,’ but will be completely controlled by Kroger,” UFCW 455 stated. “Under Kroger’s K-plan they will decide how much to contribute to the cost of your health care. You could be paying more, while they could contribute less.”

The South-Central fund includes Kroger workers in Houston as well as in Louisiana, Arkansas and other parts of Texas, UFCW 455 said. “Almost all of our other UFCW local unions that represent Kroger workers throughout the country operate with the same type of health care fund that you have now,” the union said in the FAQ. Overall, UFCW 455 represents more than 19,000 members in Texas and Louisiana, including workers in grocery, retail, warehousing, food packing and processing, manufacturing and other industries.

In late July, Kroger — along with Albertsons Cos. and Ahold Delhaize USA’s Stop & Shop — announced tentative agreements with UFCW locals to withdraw from the UFCW International Union-Industry Pension Fund and migrate to a VAPP. UFCW’s national pension fund board of trustees of the UFCW’s national pension fund has approved the agreements, while union ratification is pending. The retailers said the shift to a VAPP will buttress the security of pension benefits for UFCW members and reduce financial risk for the companies concerning pension costs.

Kroger reported that its agreements with 20 UFCW locals cover 40 separate contracts and would allow 33,000 Kroger Co. associates — including most meat and deli clerks and some retail clerks — across 14 divisions to participate in the new VAPP.

“Kroger has offered to invest nearly $1 billion to improve the stability and security of past and future pension benefits for 33,000 associates across 14 divisions, including Houston meat clerks. Establishing a new variable annuity pension plan (VAPP) is the most effective way to do this,” Kroger Houston stated. “UFCW Local 455’s failure to allow a vote on the pension proposal holds both parties back from enhancing the security of pension benefits of thousands of Kroger Family of Companies associates who are also UFCW members across the country,” the division added.

In September, the Kroger Dallas division and UFCW Local 1000 reached a collective bargaining agreement that covered over 11,000 associates in the division, which is based in Coppell, Texas. The new contract includes increased wages for all associates; ratification bonuses and retroactive pay for department heads, store leads, high-performing associates and other store positions; and improved health benefits, including lower associate contributions and deductibles, Kroger reported.

Meanwhile, on Friday, West Virginia Metro News reported that union workers at dozens of Kroger stores in West Virginia have rejected the company’s latest contract offer and voted to approve a strike. Members of UFCW Local 400 voted 1,551-130 to reject Kroger’s offer and 1,490-199 in favor of strike authorization. A strike has not yet been scheduled.

“Associates are continuing to report to work as scheduled," said Kroger Mid-Atlantic Corporate Affairs Manager Allison McGee. "A strike authorization doesn’t mean a strike. At this point, the union has not called for a work stoppage. Our focus remains on our associates and recognizing and rewarding them for their hard work,” she said.