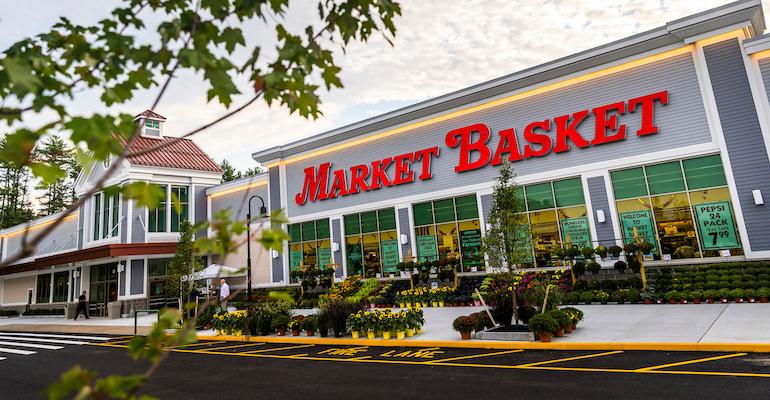 Market Basket
Dunnhumby said it rated Market Basket first in the Inflation Retailer Preference Index for being the "best in the country" at saving grocery customers money while building strong emotional ties and generating shopper visits faster than most other retailers.
News>Retail & Financial

Market Basket beat out discount giants Aldi, Dollar General, Walmart and others as the top-ranked grocer for inflationary times in an inflation-focused edition of the dunnhumby Retailer Preference Index (RPI). 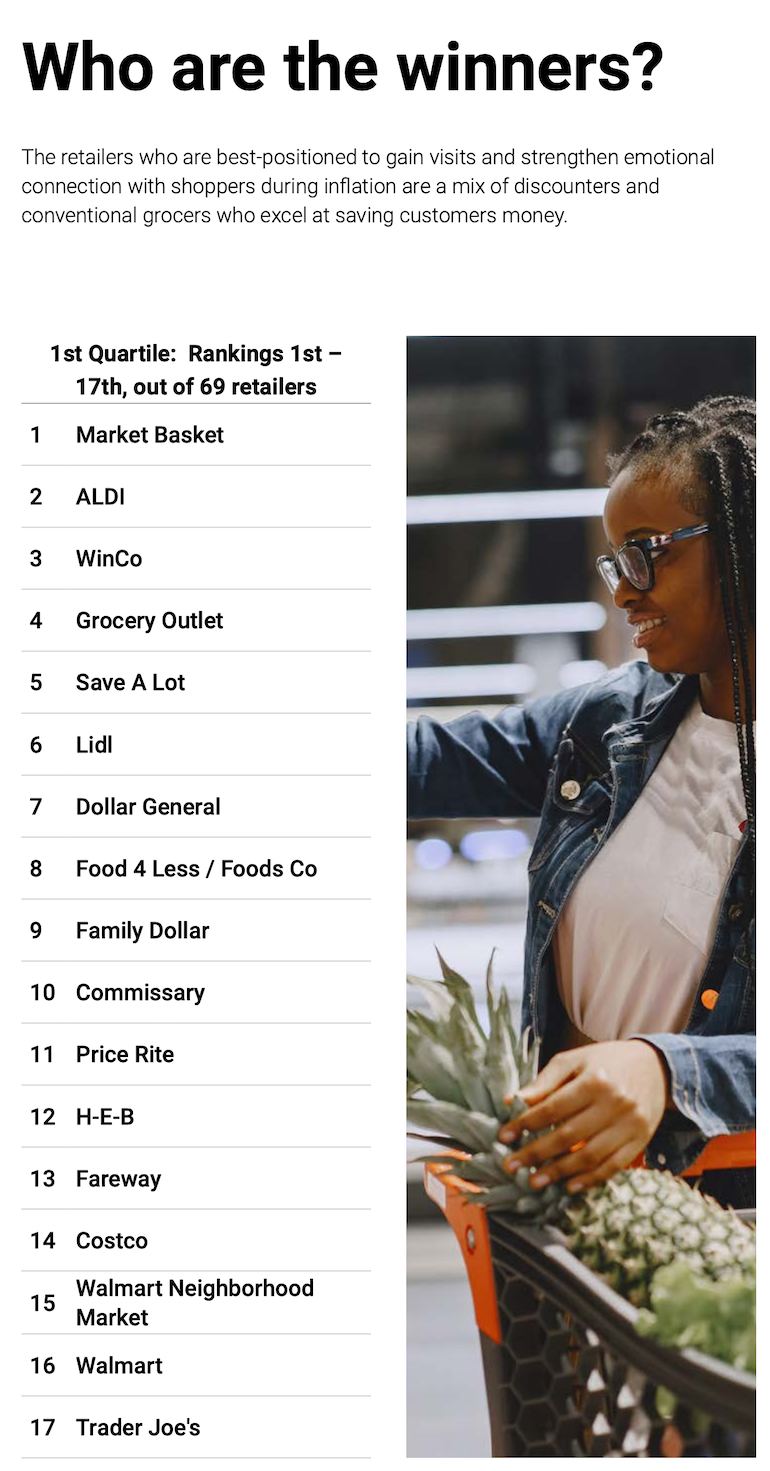 “Market Basket has shown itself to be the best-performing retailer in these times of economic uncertainty, by being the best in the country at saving customers money while simultaneously building stronger emotional connections with their shoppers and thereby increasing their shopper visits faster than most other retailers,” according to Grant Steadman, president of Chicago-based dunnhumby North America. “Retailers who are focusing their customer value proposition on saving customers money are best-positioned to meet the challenges of this prolonged period of inflation and economic uncertainty.”

Consumer preference drivers, or pillars, as defined by dunnhumby for the study included Save Me Money (affordability), Save Me Time (shoppability), Make It Better (quality and service), Make It Seamless (e-commerce) and Make It Dependable (in-stocks and consistent pricing). To see which drivers had more impact on traffic growth and emotional connection with retailers, dunnhumby polled 18,000 U.S. grocery shoppers in two research waves (October 2021 and June 2022), collected perceptions on 69 of the biggest grocery retailers and modeled their responses against Placer.ai foot traffic and Similarweb web traffic.

After Market Basket at No. 1, the top five grocery retailers in the inflation RPI included WinCo Foods, Grocery Outlet and Save A Lot. Rounding out the top 10 were Lidl (No. 6), Dollar General (No. 7), The Kroger Co.’s Food 4 Less/Foods Co. banners (No. 8), Family Dollar (No. 9) and food commissaries (No. 10).

“Market Basket – a 90-store, traditional grocery chain in New England – leads all retailers in our Inflation RPI rankings,” dunnhumby said in the report. “They do so by also ranking first in the U.S. in the all-important Save Me Money pillar. Within the Save Me Money pillar, there are many levers a retailer can pull, from base prices, to promotions, to private brand. Market Basket is the only retailer who is top-five in both base price perception and mass promotions perceptions, which more than offsets its lower performance in Save Me Time.”

By far, Save Me Money was the leading customer preference driver in the research, five times more important than the next two drivers Save Me Time and Make It Better, dunnhumby noted, adding that Make It Seamless and Make It Dependable had little to no impact on retailer outcomes in its inflation-model RPI.

Seventeen retailers constituted the first quartile of the inflation RPI, signifying that they offer the best combination of the five pillars. Retailers making the top 17 also included Wakefern’s Price Rite (No. 11), H-E-B (No. 12), Fareway (No. 13), Costco Wholesale (No. 14), Walmart Neighborhood Market (No. 15), Walmart (No. 16) and Trader Joe’s (No. 17). 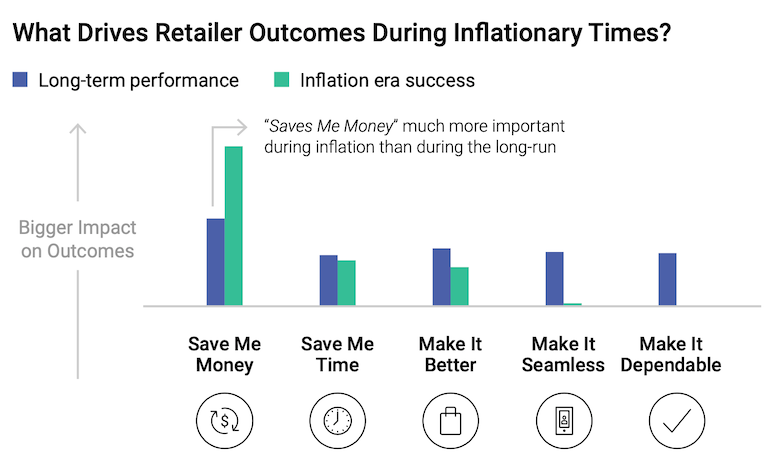 In the current inflationary environment, “base price followers” have little wiggle room by pitching the lowest prices, dunnhumby pointed out. Still, these chains can minimize the damage and possibly tighten emotional bonds with customers via close base-price gaps and sharp execution of mass promotions, communications, personalization and private brands, the report said. Kroger, Food Lion, BJ’s Wholesale Club and ShopRite were cited as examples of retailers with customer value propositions that compete best with base price leaders amid times of inflated prices.

Discounters like Dollar General, Family Dollar, Grocery Outlet, Lidl and Save A Lot feel a big tailwind during inflationary times, whereas during periods of economic stability they hold “a highly vulnerable proposition for the long term due to quality weaknesses” as well as cross-shopping with each other and other inflation-ready retailers such as Walmart, dunnhumby observed.

The Inflation RPI research also revealed that warehouse club retailers have taken a traffic growth hit so far this year. Dunnhumby said the trend reflects a “misalignment” with consumer behavior, as high prices have pushed many shoppers to spread out spending out over more visits with smaller baskets. Similarly, the study found, lower-income shoppers tend to favor smaller pack sizes amid elevated inflation.

“Club retailers such as Costco, Sam’s Club, BJ’s Wholesale, market outliers in saving customers time, are also underperforming the market in year-over-year visit growth in 2022,” dunnhumby stated in the report. “According to Placer.ai, the club channel declined 1.9% in the first half of 2022 compared to the first half of 2021, slower than any other channel. This is notable because the club channel tends to be well-positioned for success over the long term. Inflationary times have taken some of the wind out of the club channel’s sales.”

Unsurprisingly, specialty grocers and premium supermarkets leading with quality first — such as Sprouts Farmers Market, The Fresh Market, Wegmans Food Markets, Publix Super Markets and Harris Teeter — aren’t well-positioned for inflationary times because they stand “too far behind most of the market” in the Save Me Money preference driver, dunnhumby reported. The study noted that these retailers also trail the market in year-over-year visit growth during 2022. 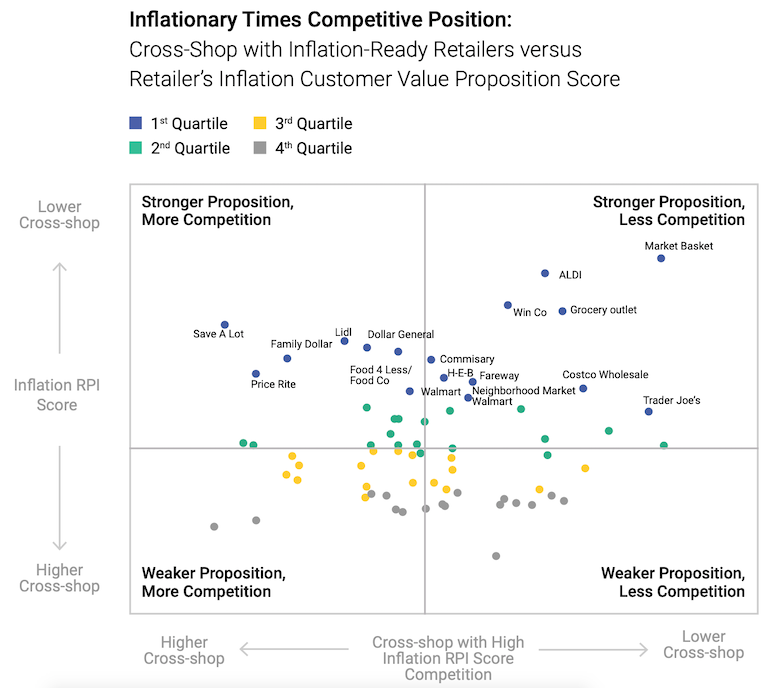 “A look at how positioning of retailers is different for the long term versus inflationary times reveals just how much a context shift in the market presents a reversal of fortune for certain retailers. The dramatic differences in rankings between inflation and standard RPI results uncovers a critical contextual shift for customers,” dunnhumby noted in the report. “For example, Wegmans, Sprouts, Fresh Market, Fresh Thyme, Big Y Foods and Publix lag the market in Save Me Money perceptions and are consequently lesser positioned for inflationary times. However, they are able to parlay their differentiated Make It Better positioning into superior long-term growth and emotional connections. Failure to meet customers where they are during inflation may not only lead to loss of market share in the near term but also could create cracks in the strong, long-term emotional connection that they have built with their shoppers.”

Amazon, perhaps, provides the best example of how inflation can change a retailer’s value play in the eyes of grocery shoppers. In the 2022 dunnhumby Retailer Preference Index (RPI), Amazon finished No. 1 (ahead of H-E-B) among over 60 retailers as the top grocer, and in this year’s first dunnhumby eCommerce Retailer Preference Index (RPI), Amazon ranked No. 2 (behind H-E-B) as a leading online grocer. Yet an online traffic decrease this year pulled Amazon from the top ranks of grocery retailers in the Inflation RPI.

“Amazon, typically ranked first in the strength of its long-term value proposition in our annual RPI study, has seen web traffic decline 6.5% this year, slower than the average brick-and-mortar grocery retailer. While a competitive advantage in e-commerce provides wind in the sails for the long term, during inflationary times that wind dies,” dunnhumby said in the study, adding that H-E-B — the top-ranked online grocer in the eCommerce RPI — came in 12th in the Inflation RPI.

“Make It Better and Save Me Time are the other pillars to show a positive association with retailer outcomes during inflationary times, but their impact is dwarfed by the impact of Save Me Money,” according to dunnhumby. “Translation: Customers are much more likely to trade off on benefits of better product quality and time savings to save money during inflationary times.”