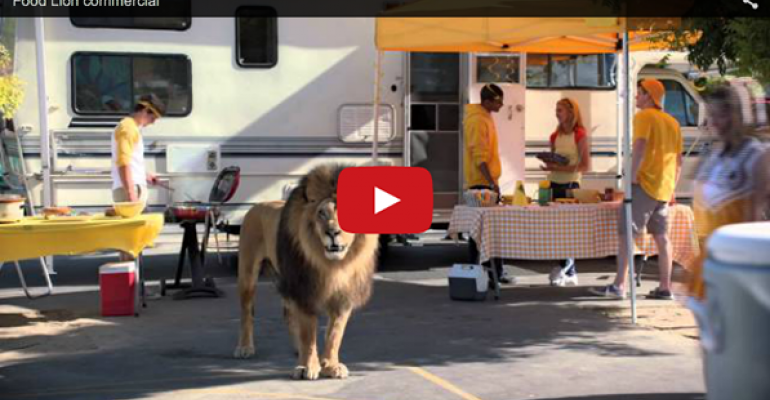 Animal activists are calling for Food Lion to discontinue using a live lion in its ads, but a planned protest at a commercial shoot this week was called off when the lion didn’t show.

Food Lion has used a lion “spokesman” in its ads for more than two years. The animal advocacy group People for the Ethical Treatment of Animals said it planned to protest a commercial shoot scheduled Tuesday in Van Nuys, Calif., but instead issued a statement condemning the practice after learning that the lion was not to be on the set that day. Food Lion in a statement said the lion was never scheduled to be on set that day, while PETA contended the threat of a protest caused the retailer to change plans.

“No lions were dragged to Food Lion’s commercial shoot in Van Nuys today, and PETA is calling on the company to make a pledge for the future: no wild animals in ads, ever," Delcianna Winders, deputy general counsel of the PETA Foundation, said in a statement. “Whether they’re filmed in front of a green screen or on a cramped commercial set, lions in the entertainment industry are denied everything that’s natural and important to them and are even beaten into obedience. Food Lion can and should create eye-catching ads without resorting to the use of deprived, captive wild animals.”

Food Lion in a statement provided to SN disputed that characterization.

“We require our filming partners to adopt numerous precautionary measures to ensure the safety and well-being of the lion in our commercial. This includes using animal-actor trainers with an exemplary record of care and third-party oversight of the filming process every time the animal is on set.”

PETA and Delhaize had a prior dispute over advertising when the group in 2010 objected to a billboard promoting beef at the now defunct Bloom chain that emitted the smell of charcoal and black pepper. PETA at that time threatened to counter by erecting a neighboring billboard emitting the aroma of a slaughterhouse with the message “Meat Stinks.” That billboard however did not go up, reports said.