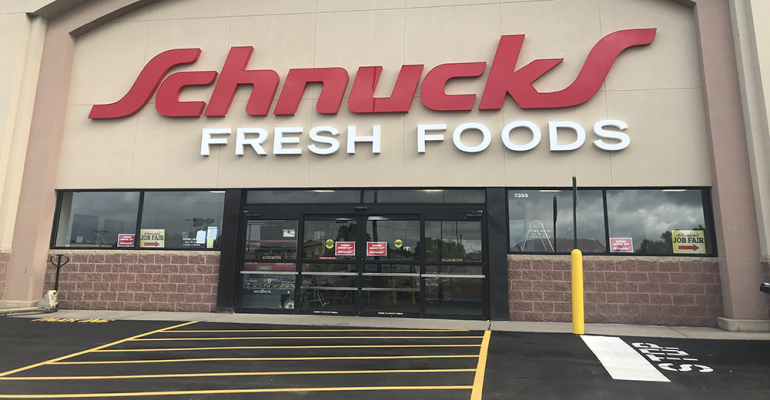 Schnuck Markets plans to permanently close a supermarket in Alton, Ill., after it was temporarily shut amid the company’s response to the coronavirus pandemic.

St. Louis-based Schnucks said yesterday that its Oakwood store at 1721 Homer Adams Parkway in Alton won’t be reopened after its lease expires in June. The location initially was closed on March 16 so associates could assist at other Schnucks stores experiencing “significant increases in customer traffic” amid the COVID-19 outbreak, according to the company.

Related: Schnuck Markets ‘rounds up’ at the register for coronavirus relief

A converted Shop ’n Save supermarket, the 51,000-square-foot store Oakwood store has seen poor sales since its October 2018 acquisition from Supervalu, Schnucks noted. As a result, the company decided not to renew the store’s lease. The 45 employees at the location will continue to work at other Schnucks stores in the area and retain the same rate of pay, the retailer said.

“Even prior to the pandemic, shoppers in the River Bend area had overwhelmingly chosen instead to visit our nearby Alton store, which is only a mile-and-a-half away, and our Godfrey location, which is less than two miles away,” Schnucks Chairman and CEO Todd Schnuck. “With that data, and knowing that the lease expiration was approaching, we made the decision to close the store and focus on those Metro East stores that customers have shown us they prefer.”

Metro East customers will still be able to shop at 15 other Schnucks stores in the surrounding area, the retailer said. Those stores employ approximately 1,600 associates combined.

Last November, Schnucks shut three supermarkets in the St. Louis metropolitan area — including locations in St. Peters and O’Fallon, Mo., and Edwardsville, Ill. — that it said underperformed, in part, due to cannibalization from nearby Schnucks stores. The move also was part of a broader effort by the chain to optimize the its brick-and-mortar locations.

Then last month, Schnucks announced the sale of its 110 retail pharmacies, along with its specialty pharmacy business, to CVS Health. Under the deal, CVS agreed to operate 99 of the locations under the CVS Pharmacy banner inside Schnucks stores, with the remaining 11 Schnucks pharmacies transferring their prescription files to nearby CVS drugstores.

Earlier in March, Schnucks acquired a 38,000-square-foot IGA supermarket in Mahomet, Ill., marking its fourth store in the Champaign-Urbana metro area. The store reopened under the Schnucks banner on April 1.