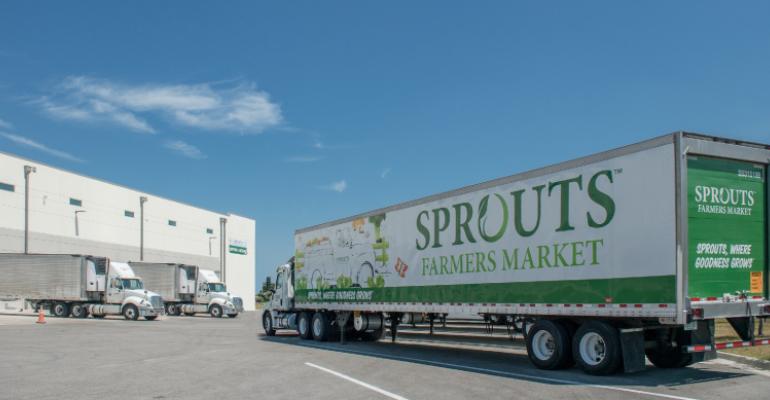 Sprouts Farmers Market
Sprouts recently announced it will drive efficiencies across its network of fresh distribution centers by locating them within 250 miles of the stores they serve, allowing for fresher, local assortment.
News>Retail & Financial

Sprouts Farmers Market’s new produce distribution center in in Orlando, opened last week, marks its first center in Florida and its seventh across the country. The facility will serve all the natural grocer's current 23 stores in the state and the additional 10 locations planned to open in Florida this year.

The 135,000 square-foot facility was built for Sprouts and includes 34°F and 55°F storage and fruit ripening rooms that are ideal for a wide variety of fresh produce. Sprouts recently announced it will drive efficiencies across its network of fresh distribution centers by locating them within 250 miles of the stores they serve, allowing for fresher, local assortment.

“With organics representing more than a third of our produce business in Florida, we know shoppers across the state are interested in fresh, affordable organics and local varieties,” said chief fresh merchandising officer Scott Neal. “We’ve put together a team of local produce buyers to bring to market the freshest, local product available. Additionally, the new center’s state-of-the-art ripening rooms provide the ideal climate for produce storage and will immediately provide shoppers with perfectly-ripe avocados and bananas.”

The distribution center will support and expand Sprouts’ local farm partnerships with growers like Jim Rash, Noble Citrus, Astin Berry Exchange and others, allowing for exclusives like Sugar Baby watermelons, available this summer. Later this year, Florida stores will transition to an all-organic mushroom set.

Sprouts is partnering with Penske Logistics as its third-party logistics provider for the distribution center and dedicated transportation fleet, which created 57 new full-time jobs in the market. The grocer’s ability to offer fresh, high-quality produce at a great value is supported through its network of distribution centers, direct grower relationships and enhanced quality controls. In addition to the new Orlando facility, Sprouts currently operates distribution centers in Aurora, Colo.; Colton and Union City, Calif.; Glendale, Ariz.; Wilmer, Texas; and Atlanta.

To celebrate the opening, the Sprouts Healthy Communities Foundation donated $25,000 to Fleet Farming, an Orlando nonprofit urban agriculture program that brings edible landscaping to schools, community centers and affordable housing units to increase local food accessibility. Their largest initiative can be seen in 13 micro farms or “farmlettes” they have helped create in previously unutilized front lawns in the Audubon Park community near Sprouts’ store in Winter Park. Fleet Farming hosts biweekly “swarm rides” in which staff and volunteers bike from one farmlette to another, tending to and harvesting the produce.

The Foundation’s donation will provide Fleet Farming resources to purchase a vehicle to transport agricultural supplies and will support the buildout of a commissary kitchen that will allow staff to prepare food within a mile of their distribution hub. Remaining funds will be used to purchase gardening supplies like seedlings and soil for the 13 farmlettes. Since 2017, the Sprouts Healthy Communities Foundation has donated more than $270,000 to nonprofit organizations across Florida, supporting garden-based learning and healthy eating programs for kids, including the work of Orlando Health Foundation and the Arnold and Winnie Palmer Foundation.

Headquartered in Phoenix, Sprouts Farmers Market operates more than 360 stores in 23 states nationwide. Since opening its first store in Florida in 2017, Sprouts has been rapidly expanding across the state, with 33 stores planned by the end of the year.