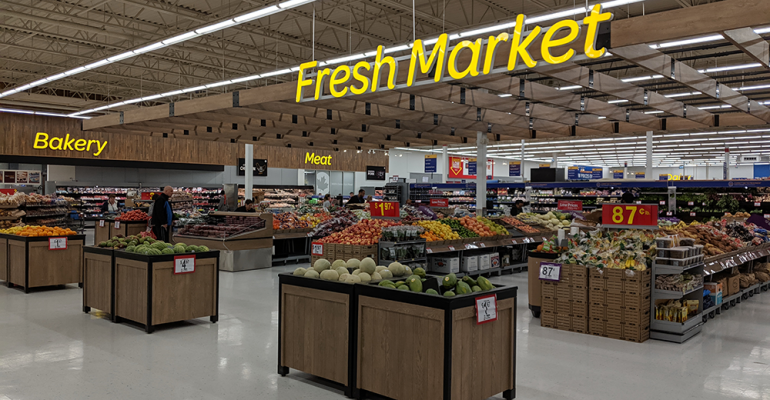 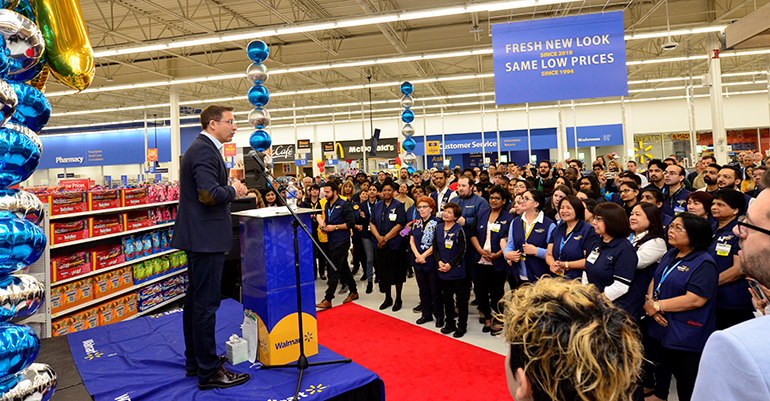 "With our new urban supercenter concept, we're continuing to position ourselves as a leader in store design and retail innovation," Walmart Canada President and CEO Lee Tappenden said in a statement. "We're introducing new partners, testing new and innovative technologies, integrating e-commerce with bricks-and-mortar and updating our assortment to improve the customer shopping experience and to appeal more to young families in urban markets."

Renamed Fresh Market, the grocery department has been redesigned to include more theater lighting and a wood-panel wall treatment for a market look and feel, Walmart Canada said. The section offers fresh fruit and vegetables, including organic items, plus 100% Canadian beef, chicken, pork and seafood.

With the expanded foodservice, the Stockyards Walmart houses a seating area where customers can eat meals and sit with friends and family. There’s also a community board featuring local news, activities and events.

Walmart Canada noted that the new supercenter prototype introduces Fast Lane, a feature that enables customers to use the My Walmart app on their smartphone to shop and complete their transaction quickly and seamlessly by exiting the store through a dedicated checkout lane. When ready to check out, shoppers walk into the Fast Lane, scan the app barcode for their order (which is charged to their credit card on file) and show the receipt on their phone to the Fast Lane associate. 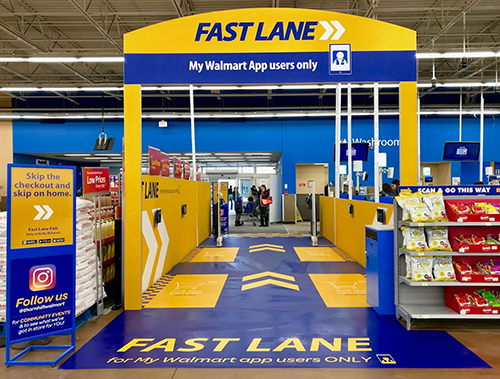 Also on the omnichannel front, the Stockyards Walmart includes a dedicated Walmart.ca section, in which customers can see and shop for extended-aisle products and talk with associates who can answer questions and assist with online orders. Walmart said the area will be used to host online vendor pop-up shops as well. To support the e-commerce enhancements, the store offers expanded and improved pickup areas plus new associate positions focused on customer service, including online grocery and general merchandise pickup.

Several innovations from previous Walmart Canada prototypes also have been integrated into the urban supercenter concept, including improvements to product displays, signage and floor plans, the company added.

"Our new concept is a symbol of what's to come in retail and demonstrates our vision for helping Canadians save money and live better, now and in the future," Tappenden stated.

Plans call for a second supercenter concept to launch in Thornhill, Ontario, next year, and best practices from new-format stores will be incorporated into future remodels, according to Walmart Canada.

Earlier this month, Walmart Canada said it aims to renovate and/or refresh 31 stores — including conversions to the Supercenter format — as part of a $200 million investment in its retail network. The project involves 17 locations in Ontario, five in Alberta, three in Quebec, two in British Columbia, two in Manitoba, one in Newfoundland and one in Saskatchewan.

Over the last five years, Walmart has invested more than $1 billion in its Canadian store network, including a $175 million plan to upgrade 23 stores in its last fiscal year. Mississauga, Ontario-based Walmart Canada operates about 410 stores overall.