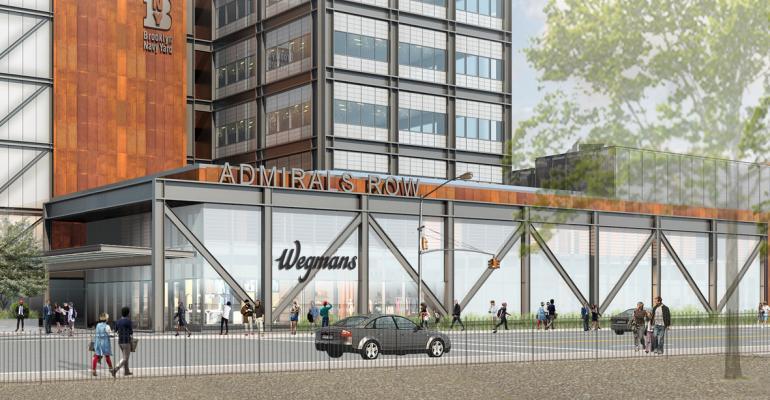 Long-awaited supermarket to arrive in Brooklyn in October

The highly anticipated opening of Wegmans Food Markets’ first New York City store has finally been given a date. The 74,000-square-foot supermarket will open on Oct. 27 in the Admirals Row development of the Brooklyn Navy Yard.

“The Brooklyn community has been eagerly awaiting the opening date for this store,” said Vice President and District Manager Todd Ferrera. “October 27 is just around the corner, and we can’t wait to celebrate with everyone.”

The Rochester, N.Y.-based grocer first announced the project in May 2015.

Recruitment for 150 full-time employees at the store began in January and is ongoing. In total, the store will employ 500 people, the vast majority hired locally.

“Although the opening is still several months away, new employees begin in-depth training soon after they’re hired so that they’re knowledgeable and fully prepared to deliver incredible customer service,” said Store Manager Kevin Cuff. “Wegmans has a long-standing reputation as an exceptional employer, with tremendous opportunity for career growth and development.”

Wegmans Brooklyn will feature more than 60,000 individual products, including an extensive restaurant-quality prepared foods department, more than 4,000 organic products, fresh seafood delivered whole and cut to order daily, hundreds of produce items and 300 varieties of imported and domestic cheese. The store will also include a second-floor mezzanine with a bar, serving food and wine, beer and spirits.

The Brooklyn store is one of three new locations — all in new markets — due to open this year, lifting the grocery chain over the 100-store mark. The company opened a 113,000-square-foot store in Virginia Beach, Va., on April 28 and is planning a 100,000-square-foot store in Raleigh, N.C. No opening date has been announced yet for the Raleigh location.

The popular grocer has a loyal customer base and its store openings are highly anticipated events in many markets. Wegmans recently ranked second in Consumer Reports’ survey of customer satisfaction, scoring 90 out of 100 and, along with No. 1 Central Market, was the only store in the ratings to excel not only in produce quality, but also in produce variety, selection of healthy options, selection of locally produced products, and variety of international products or multicultural foods,” according to Consumer Reports Senior Editor Tobie Stanger.