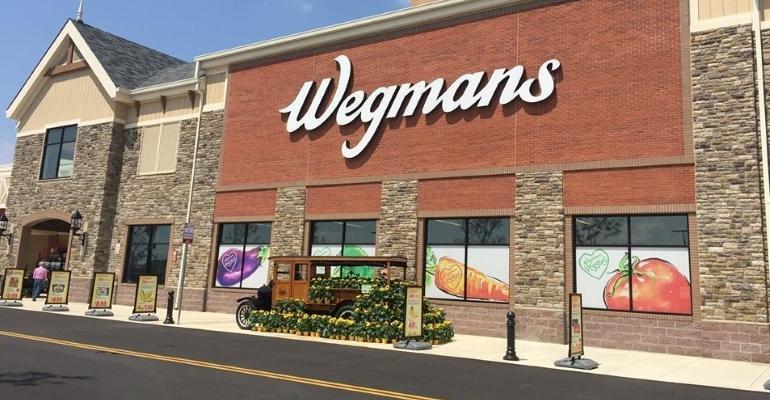 This weekend, Wegmans Food Markets will hit the 100-store mark with the opening of its first location in North Carolina.

Located at 1200 Wake Towne Dr. in Raleigh, N.C., the 104,000-square-foot Wegmans is slated to open Sunday morning at the Midtown East Shopping Center near Interstate 440.

The supermarket will feature Wegmans’ signature European open-air market look and feel, with eye-catching displays of fresh produce, artisan breads and other baked goods plus restaurant-quality prepared foods (including hot and cold bars), fresh-caught seafood, imported cheese, deli and charcuterie, and international foods. It also will house The Burger Bar, a casual restaurant counter serving burgers, salads, sandwiches, soup, side dishes and beer and wine by the glass.

Customers, too, can get store-made sushi, made-to-order salads and subs, and authentic Italian pizza as well as choose from more than 4,000 organic items at the store, which has a culinary staff of 120 out of its 475 employees.

According to Raleigh store manager Hallie Johnston, the location has generated high interest from area residents, with over 24,000 customers signing up for the Wegmans Shoppers Club through the store’s website and app as of Sept. 24.

Upcoming new stores from Rochester, N.Y.-based Wegmans will expand its Mid-Atlantic market farther south and establish a presence in the New York City area. Most recently, on April 28, the chain opened a 113,000-square-foot store in Virginia Beach, Va., which at the time represented the retailer’s southernmost location.

The Raleigh store will assume that designation come Sept. 29. Wegmans said it plans another five stores for the Raleigh-Durham area, including a location at Davis Drive in West Cary slated to open next year. Other North Carolina locations that have been announced include Wake Forest, Cary and Chapel Hill.

Next up for Wegmans is the chain’s long-awaited first New York City store, a 74,000-square-foot location that will anchor the redeveloped Admirals Row site in the Brooklyn Navy Yard. Wegmans had announced the project in May 2015. Due to open Oct. 27, the Brooklyn store will feature a second-floor mezzanine with nearly 100 seats for the in-store café, which will include a bar that serves food, wine, beer and spirits.

A second metropolitan New York location is expected to open in spring 2020 in Harrison, N.Y., in Westchester County. Hiring for the 121,000-square-foot store, situated at 106-110 Corporate Park Dr., began in April.

With the Raleigh store, Wegmans’ operating area will grow to seven states. The chain currently has 99 locations in New York, New Jersey, Pennsylvania, Maryland, Virginia and Massachusetts. Wegmans has said the Harrison location will be its 102nd store overall and 48th in New York state.

Other new stores planned by Wegmans include locations in Greenville, Del.; Annapolis and Rockville, Md.; Middletown, N.J; Washington, D.C. (in the former Fannie Mae campus); and Alexandria, Arcola, Reston and Tysons Corner, Va. The Tysons Corner store is slated to open in 2020. No opening timetables have been announced for the other upcoming locations.