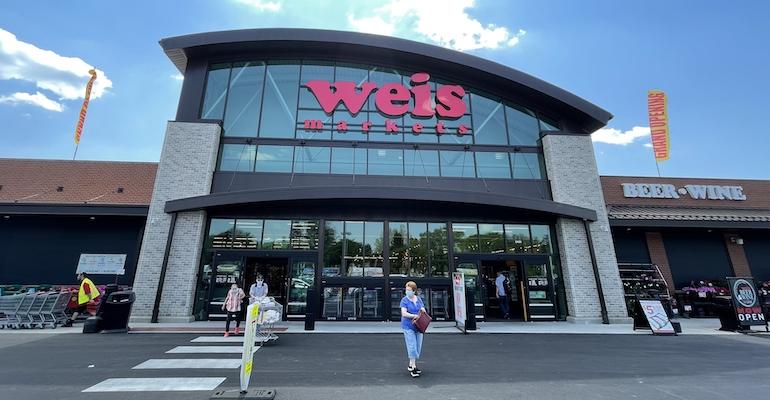 Moving ahead with its capital expenditure plan, regional grocer Weis Markets has opened the doors to two new supermarkets in Pennsylvania’s Lehigh Valley.

Sunbury, Pa.-based Weis Markets said Thursday that it opened a 63,000-square-foot store in the Westgate Mall in Bethlehem and a 68,000-square-foot store in Lower Macungie. The company noted that the Bethlehem store, occupying a former Bon-Ton department store space, is nearly double the size of the store it replaced at the mall, while the Lower Macungie store at the corner of Route 100 and Gehman Road is “significantly larger” than the location across Route 100 that it replaced.

“We are proud to make a significant investment in the Lehigh Valley, a growing region where we operate 14 stores,” Chairman, President and CEO Jonathan Weis said in a statement. “Our new stores offer customers in Bethlehem and Lower Macungie more amenities, a broader range of products and increased convenience, along with the strong everyday values that customers expect from Weis Markets.”

Both the Bethlehem and Lower Macungie stores, opened to the public May 13 and May 20, respectively, feature beer and wine cafés, fuel centers, pharmacies, fresh-made sushi and new meal solution centers, along with expanded variety natural and organic store-within-a-store departments.

The space and positioning of the Lower Macungie store also accommodate a drive-thru pharmacy, a seating area with beer on tap in the café and a covered pickup area for Weis 2 Go online orders, Weis Markets noted. In addition, both stores offer improved parking and accessibility and more eco-friendly operations, including a CO2 refrigeration system and LED lighting throughout.

Also available to Lehigh Valley customers is Weis Markets’ “Low, Low Prices” program, which launched in 2019 and has cut prices on more than 7,000 grocery and produce items to offer the lowest everyday price in the market, the retailer said. The company described the multimillion-dollar investment in lower prices as its “most ambitious” price-reduction program to date.

“We are grateful for the local support for our project and look forward to continuing to serve the growing Bethlehem and Lower Macungie communities,” Weis added.

Earlier this month, Weis Markets unveiled a $135 million capital investment program with projects ranging from new stores and fuel centers to store remodels, information technology upgrades and over 1,000 smaller store improvements. The grocer said it plans to renovate eight stores and add eight new fuel stations in 2021, though some projects may not be completed until 2022.

Besides the two Lehigh Valley stores, Weis Markets this year opened a 66,000-square-foot store in Martinsburg, W.Va., on Feb. 4 and a 46,500 square-foot store in Gap, Pa., on April 22. The Gap store, now slightly larger, reopened after closing due to a fire in November 2019.