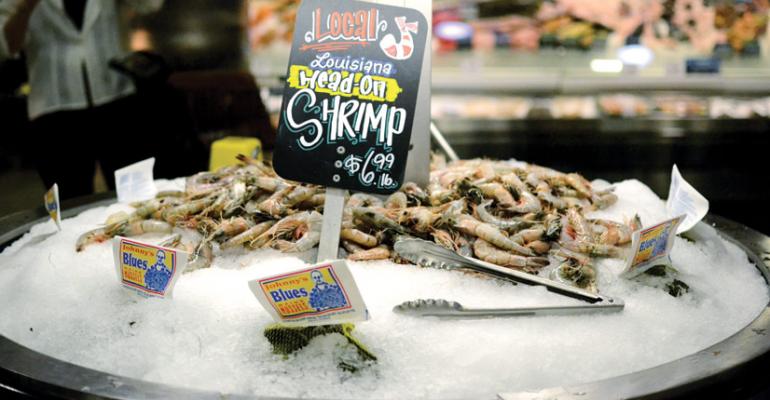 &ldquo;Part of what we think is happening here is over a 52-week time period is just a bounce back from the &hellip; prior year. So that&rsquo;s why your 52-week growth is larger.&rdquo; &mdash; Sherry Frey, VP, Nielsen Perishables Group

Considering the recurring supply issues with key products and a persistent sales slump over the past few years, there’s some surprising news for seafood: 2013 was a pretty good year.

“Overall, from both a dollars and a pounds standpoint, it’s been very consistent. Probably one of the more consistent ones throughout fresh for the year,” said Jeff Josselyn, senior director of meat and seafood procurement at Ahold USA.

Josselyn’s observations, which match industry sales data, show consumers returning to the department after spending their dollars elsewhere during the recession. Yet, industry experts assert the seafood department must focus on innovation and messaging if stores hope to continue to see strong sales.

In the 52 weeks ending Sept. 28, 2013, total retail seafood dollar sales grew 6% over the previous year, and volume increased 5%, according to data from Nielsen Perishables Group.

However, seafood’s growth is slowing. While per week, per store sales were up 6.9% in May compared to the previous year, that number dropped to 2.7% in September, Nielsen reports.

“Part of what we think is happening here is over a 52-week time period is just a bounce back from the … prior year. So that’s why your 52-week growth is larger,” said Sherry Frey, vice president, Nielsen Perishables Group.

“But when you really look at it in the latest quarter, it’s not as strong and it’s not as healthy as the other departments.”

Seafood is also still fighting to reach more consumers, and hold on to those that do shop in the department. Per capita seafood consumption fell 4% in 2012, according to the National Marine Fisheries Service.

There are a few strategies retailers can employ to lure customers into the seafood department.

“One of the things I think retailers are doing and starting to do really well is simplifying the message on sustainability,” said Frey.

That includes helping customers understand which items are “good,” “better” and “best,” in terms of sustainability.

At the same time, retailers need to be careful about how they position sustainability information, cautioned Phil Gibson, a consultant at Encore Associates, San Ramon, Calif. Too many details about where fish come from could actually turn consumers away.

As the industry moves towards sustainability, it can mean price increases.

“And I think that that’s a challenge for us as a retailer to give that message to the consumer and to have them understand what that sustainability message actually means,” said James Breuhl, meat and seafood director at Rouses.

Often consumers bypass the seafood department altogether, especially if it’s located at the back of the store. To capture those customers, some retailers are experimenting with self-service seafood kiosks in more heavily trafficked areas of the store.

“So where the seafood department is also often kind of a department where the consumer has to kind of walk to and might walk past, they’re actually doing a really great job of moving up some of these self-service [kiosks],” said Frey.

At the other end of the spectrum, a Mariano’s store in Chicago has an oyster bar where customers can sit down for oysters and wine while they shop.

“So kind of playing up to this idea of engaging with the consumer and kind of creating a fun experience in the store,” said Frey.

A knowledgeable staff is key to assisting the many customers who need help with seafood selection, but approaches to staff training can vary from retailer to retailer.

At some larger chains, employee training in seafood is not a priority, said Gibson, who is a former Safeway executive. “They don’t spend a lot of money on training people behind the counter.”

For those that do, however, the benefits are clear. Gibson named Wegmans Food Markets as an example of a retailer investing in its seafood staff.

While at Safeway or Kroger seafood might be 2% of store sales, said Gibson, “in a place like Wegmans it’s closer to double that.”

All of Rouses’ seafood employees must undergo intensive training before starting work in the department.

“Because we not only carry just fish filets but we also carry whole fish in all of our stores. So in order to work in our stores you have to know how to handle and how to cut every single whole fish,” said Breuhl.

When merchandising seafood, Rouses makes sure to highlight oysters, crabmeat and shrimp, because those are the items customers look for most.

On the other hand, every store in Rouses’ market area focuses on those items.

“And one thing that separates us from the other retailers that are around us is just the fact that we’re so involved with the local community,” said Breuhl.

Those items include salmon and previously frozen scallops, cod and haddock.

“I feel it should be a good year. We’re going to have beef markets and pork markets that are probably going to be at all-time highs,” said Josselyn.

Though high beef prices could benefit seafood there’s “not a lot of spillover there” because chicken is seafood’s main competitor, said Gibson.

For Breuhl, it was a bit of good news, bad news.

“So I think that seafood will be a protein that consumers will turn to, but I think it will be your lower-end price point items like catfish, tilapia, swai, those type of items that the consumer’s going to buy bulk on and feed their families at a cheaper price.”

A disease disrupting farmed shrimp production in Southeast Asia put a strain on the supply of Americans’ favorite seafood, but so far consumer appetites haven’t diminished.

“I don’t think anybody has been unaffected by it,” said Jeff Josselyn, senior director meat and seafood procurement, Ahold USA. “We try to be very forward in our thinking and forward in our planning to try and minimize and mitigate it as much as we could. But at the end of the day, I think this year’s scope of it and how quickly it hit and kind of spread to a couple other countries was one that caught everybody off guard.”

Even retailers that don’t sell farmed shrimp took a hit.

“We basically secure and deal with all wild-caught shrimp,” said James Breuhl, meat and seafood director, Rouses. “So when the farms had the diseases everybody was coming in and buying up the shares that we usually buy.”

Yet, from a consumer standpoint it would appear the supply shortages had little effect on shrimp purchases. Shrimp dollar sales rose 6% and volume sales grew 4% in the 52 weeks ending Aug. 31, according to data from Nielsen Perishables Group, gains that match trends in the overall seafood category.

“We didn’t see it in the retail environment. We’re still seeing the increases in terms of dollars and volume versus a year ago,” said Sherry Frey, vice president, Nielsen Perishables Group.