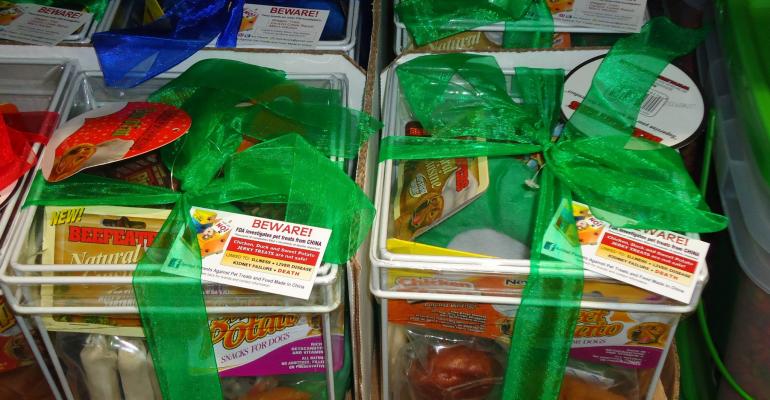 NATICK, Mass. — A Facebook group called Animal Parents Against Pet Treats and Food Made in China is attaching warnings to pet treats that are under investigation by the Food and Drug Administration.

“Beware! FDA investigates pet treats from CHINA. Thousands of complaints filed. Hundreds of deaths reported,” read the cards that have been attached to products by members of the group — many of which have pets that became ill or died after consuming jerky treats produced in China.

As of Sept. 24, over 3,600 dogs and 10 cats have reportedly become ill from eating jerky treats, most of which came from China, said Linda Tollefson, associate commissioner for FDA’s Office of Foods and Veterinary Medicine, in an FDA Voice blog post. About 580 of those pets died.

But since a contaminant has not been isolated, no recall has been issued, so many pet owners are still unknowingly purchasing the treats, according to Rita DeSollar a member of the group whose German Shepherd Heidi died five days after eating two dog treats purchased at a Walgreens store in Pekin, Ill., in May 2012.

When she purchased these treats, DeSollar was not aware that the FDA had been investigating them since 2007.

“If there was a sign on the shelf that said the FDA is investigating [jerky treats] I would have been able to make an informed choice and Heidi would still be here,” said DeSollar. “I just wish I’d have had a choice.”

SN Poll: Are you doing anything to make consumers aware of the FDA's ongoing investigation into jerky pet treats made in China?

Retailers contacted by SN said that since no recall has been issued, they’ve not addressed the matter at the shelf. Now activists are taking matters into their own hands, but their efforts aren't enough, said DeSollar, who continues to hear from upset pet owners.

“Just today, I have three more letters in my email inbox from people whose dogs have become ill or died after feeding them one of the jerky treat products still on the shelves,” she told SN. “They had no warning either.”