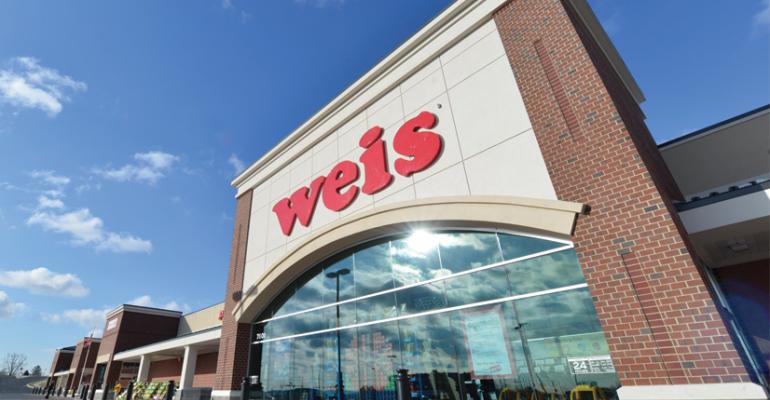 While Weis had long been pursuing energy savings and other sustainable initiatives to varying degrees, the company began taking it more seriously after David Hepfinger joined the company in 2008, and Weis elevated it even further with the hiring of Patti Olenick as sustainability manager in 2010.

The company sees itself as having four key “pillars” of its sustainability effort — protection of natural resources; green design; social responsibility; and food and agriculture (see related story).

As the company formalized its sustainability efforts and began looking at them more strategically, it tallied quantifiable results — from lower refrigerant leak rates to massive increases in tonnages of recycled materials.

Perhaps the most important impact, however, has been on the company’s culture.

One of the ways the company got its rank-and-file employees involved in sustainability was through an energy awareness program, which encourages activities like shutting off lights and closing refrigerator and freezer doors.

“We make sure they are aware they can have an impact in their store and in their homes,” said Olenick, adding the company “preaches the message” that employees can cut down on their own energy use at home just like they can in the stores.

“We have seen a 3% to 5% reduction in our energy usage just based on that program, so we know it is effective,” Olenick said. “It was the first organized program that we rolled out to associates that got them to understand what sustainability is, and put it under that umbrella.”

In terms of store design, engineering and construction, Weis has been able to reduce its carbon footprint significantly through new refrigeration technologies.

The company recently opened its first store for which it expects LEED (Leadership in Energy and Environmental Design) certification from the U.S. Green Building Council. The 65,800-square-foot store in Fogelsville, Pa., was designed with several features meant to minimize its impact on the environment, including energy-efficient lighting and refrigeration.

In addition, it was built with 30% recycled materials, and has a special concrete floor that is cleaned with ionized water rather than chemicals.

Many of the features used in the Fogelsville store are also being rolled out to other locations. New prototype stores are cutting energy use by 30% vs. Weis’ historical performance, Small explained.

“The bulk of our carbon footprint reduction has been through savings in refrigerant and eliminating quantity of refrigerant we have put in,” he said.

Charlie Dinsmore, director of engineering at Weis, said new prototype stores are using glycol refrigeration technologies, which have helped reduce the total refrigerant charge in the stores to fewer than 1,000 pounds, or less than a third of what a typical supermarket might carry.

“Plus, we have had very good results with refrigerant emissions with this system, and that has been one of the keys to lowering our carbon footprint,” he said.

In Weis’s first-ever corporate sustainability report issued earlier this year, the company noted that it had reduced greenhouse gas emissions by 15.5% from 2008 through 2012. The biggest chunk of that reduction came from a reduction in refrigerant losses.

The company has tackled its refrigerant leak rate aggressively over the last five years, leveraging its partnership with the Environmental Protection Agency's GreenChill program, Small explained.

Weis also rolled out leak monitors to all stores, which Small said reduced refrigerant by 350 pounds per store per year. It also offers incentives to its refrigeration technicians for reducing leak rates, he noted.

The company also has installed more energy-efficient HVAC systems and lighting in many stores, and has worked with local power companies to reduce energy use when the grid is drawing too much power.

Weis has switched to LED lighting for product illumination for displays and cases, and is using energy-efficient T-5 fluorescent lighting elsewhere. In addition, it has added skylights in the center of the store in prototype stores, and has combined that with some lighting controls so that on a sunny day such stores can dim the lights or turn them off altogether in center store.

Other fixtures designed to minimize the stores’ impact on the environment include low-flow toilets and sinks, and waterless toilets in the men’s room.

Weis hopes to touch all of its stores with some of these environmental upgrades by the end of next year through its “No Store Left Behind” program.

Weis also has one of the most comprehensive recycling programs of any supermarket company.

In addition to traditional cardboard recycling — Weis recycled 23,388 tons of cardboard last year — the company also has partnerships with area vendors that help it reduce the waste that is sent to landfills.

Currently 40 stores are participating in an organic waste recycling program, and 50 stores are expected to be online by the end of September. Through the program, American Biosoils & Compost, Skippack, Pa., collects the waste from stores once per week and combines it with yard waste at its composting facilities throughout central Pennsylvania. The compost is then packaged and offered for sale at Weis supermarkets under Weis’ private brand.

In July alone, Weis sent 280 tons of organic food waste to be composted.

Olenick said the food-waste collection costs about 20% less than it would cost to send the waste to a landfill, plus Weis makes revenue on the sale of the compost.

The program earned a Seal of Approval from the U.S. Composting Council, and has been in a test with that organization.

“The compost program is of great interest to quite a few government agencies who are seeking to assist companies in managing their organic waste,” Olenick explained.

“Organic waste is the last frontier,” she said. “We pretty much know what to do with our cans and bottles, so the organic portion of the waste is what the government is trying to help people to manage.”

After rolling the program out to 50 stores, the company plans to review the data to see if it can continue to expand the program.

“The stores have really embraced it,” Olenick said. “They appreciate that we are not throwing a resource in the trash.”

In another recycling effort, Weis also offers Enviro-Logs in its stores — made from the waxed cardboard used for packaging produce and which is otherwise difficult to recycle. Last year Weis recycled 352 tons in waxed cardboard, a number that has been on the rise as Weis seeks to work toward zero waste in its stores.

Other items targeted for recycling include stock bottles in pharmacies, which totaled 40 tons last year, and office paper, which generated 232 tons.

Weis also has a recycling container in every store for consumers to recycle their plastic bags. The plastic is sent to Trex, a plastic lumber manufacturer.

In addition, all stores are serviced by a vendor who turns grease trap waste into a biofuel to make heating oil for consumers. Kline’s Services, Salunga, Pa., has been collecting the used cooking grease from all Weis stores since January 2012, and recycled 330,000 gallons of cooking grease taken from Weis’s 164 stores last year.

“We continue to look for segments of the waste stream that we can pull out, recycle and manage in a different way other than taking it to the landfill,” Olenick said.

Weis has also stepped up its local buying programs in recent years. In 2013, Weis will purchase 25 million pounds of local produce from more than 100 farmers in its market area. It also makes significant beef, pork/ham and poultry purchases from Pennsylvania-based producers.

The foundation of Weis Markets’ sustainability program can be described as four pillars, which are:

This involves building stores that use less refrigerant and electricity. Remodels include new equipment and systems that help Weis achieve this as well. At the company’s 1.1-million-square-foot distribution center in Milton, Pa., the company recently completed a detailed study of R-22 refrigerant replacement in the DC’s two refrigerant systems and has launched a replacement plan will phase these out in favor of ammonia by the end of this year. The center also manages and processes all the recycled materials for the company.

3. Social Responsibility. This involves “being a good neighbor” by reducing the company’s environmental impact and giving back to the communities it serves — including supporting food banks through the Fight Hunger program and community-based health care organizations. Other beneficiaries of the company’s direct and in-kind donations include schools, pet shelters, the United Way and other local groups.

4. Food and Agriculture. Buying local is an important part of Weis’ sustainability efforts. The company has stepped up its buying local programs in recent years. In 2013, it expects to purchase 25 million pounds of local produce from more than 100 farmers in its market area — mostly in Pennsylvania but also from farms in Maryland, New York and New Jersey. In addition, almost all of the company’s Weis Quality Milk comes from Pennsylvania dairy farms. Weis also makes significant beef, pork/ham and poultry purchases from Pennsylvania producers. In addition, Weis’s “Unmistakably Sustainable” seafood program guarantees that all seafood offered is sustainable.

“It benefits our environment, customers, communities, associates and shareholders,” he said.